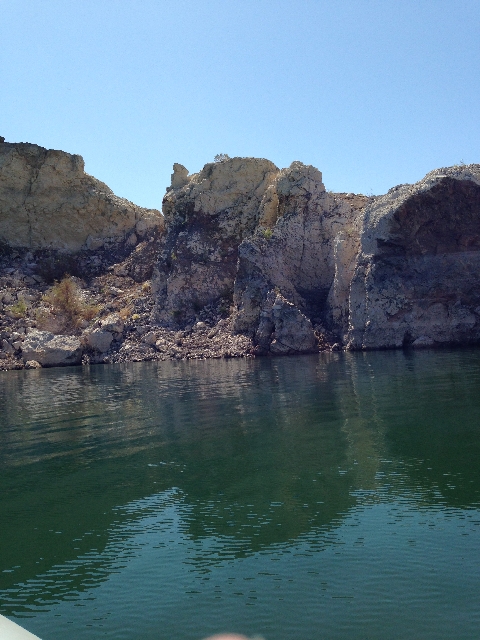 Rushing across the water with blue lights flashing, the Nevada Department of Wildlife boat operated by game warden Paul Hearne pulled along side a small fishing boat with three generations on board.

Hearne was greeted by the father of two boys who were not wearing their life jackets. When Hearne asked the age of the children, he was told they were under 13, making it mandatory for both to wear life jackets.

According to Hearne, violations like that May 24 encounter are common on Lake Mead, but he doesn’t have to throw the book at them every time.

Hearne issued a citation for one child and a warning for the other to the father on the early morning fishing trip.

“The guy seemed like he was open to a learning experience, so I didn’t think he needed two citations,” Hearne said.

Hearne said he writes two to 20 citations every day, which can range from $112 to $300 per citation.

Unexpected events can occur on the water that would require a life jacket.

“Last year we had someone take a boat out and jump out for a swim,” said Jennifer Winston, Wildlife Department education coordinator for Southern Nevada. “He just ended up getting pushed away from the vessel, and the other people on board did not know how to operate the boat, so they couldn’t get to him and he drowned.”

Lake Mead officials face dangers similar to the roadway with drunken boating being a reality.

“The legal (alcohol) limit is .08, the same as in a car,” Hearne said. The punishments are the same as they are on the roadway, and boaters over the legal limit will be taken to jail.

Boaters have an increased chance of becoming drunk while on the water, especially in the summer heat.

“When you drink out here, it affects you faster than on land because you have the waves on the lake and you have the sun, the wind, and all these environmental factors,” Winston said. “It makes you drunker quicker.”

According to U.S. Coast Guard statistics, alcohol and drugs were contributing factors in just over 10 percent of the 2,454 boating accidents in 2012 in the United States, and just over one-third of those accidents lead to death.

Cliff divers run the danger of landing on unseen rocks under the surface of the water.

“There are a lot of unknowns underneath the water,” Hearne said. “But if you do decide to, make sure you check the water and make sure it’s plenty deep.”

There was one reported injury and no deaths because of cliff diving last year, according to Christie Vanover, public affairs officer at Lake Mead National Recreation Area .

According to the Wildlife Department’s website, the water level at Lake Mead is the lowest it has been in more than 40 years. The issue began in 1998 when snow runoff from Colorado, New Mexico and Utah put in less water than was being taken out of Lake Mead. The water level naturally fluctuates, but has been low for most of the past 15 years. Since 2000, the runoff was 56 percent below normal.

The website states that the water level is at its highest during late fall and early spring. With the soaring temperatures of late spring and summer, the water level falls. The shallower water means that formations that used to be farther under the water a few years ago are closer to the surface.

Near shore, swimmers run the risk of drowning .

“What we run into a lot is that people who are on the shore don’t have all the safety equipment that the boaters do have or should have . They’ll get their inflatable rafts or something like that and they’ll come off shore a little bit too far and the wind will pick and push them out farther and farther,” Hearne said. “They don’t have their safety equipment — life jackets — on and they’ll try to get back but they’re swimming beyond their means and get into trouble and drown .”

Although the National Park Service had been focusing on alerting the public to safety in the days leading up to Memorial weekend, it also unveiled its renovation of a popular pier .

Callville Bay Resort and Marina recently spent nearly $4 million on projects, including renovations, building a water store and fuel dock. There will also be a snack bar on the water, adding to its full lounge and restaurant onshore.

A new fuel dock is creating a quicker service for customers at the marina.

“We have a faster system now with the newer equipment, so we can do their pump-outs faster,” said Tom Meismer, operations and moorage manager at the marina.

The Callville Bay project was funded out of $18 million spent throughout the park from a variety of sources, including the Southern Nevada Public Land Management Act, Federal Lands Transportation Program and the National Park Service Repair-Rehabilitation program.

“We improved campgrounds in a lot of areas,” Vanover said. “We have also improved some of the roads. For instance, at Echo Bay, it’s a lot easier to get in and out of that area now to launch your boat.”