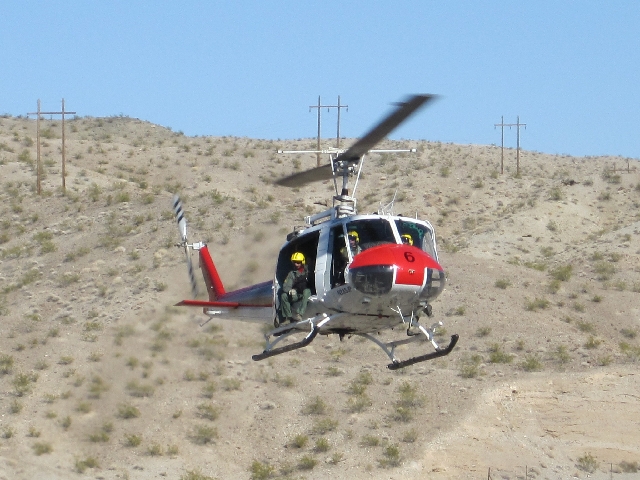 Heat, alcohol and a mysterious substance made for a troubling Saturday at Lake Mead National Recreation Area.

Unfortunately, the heat that climbed to 110 degrees in the park claimed a Las Vegas Boy Scout leader who suffered from heat-related illness while on a hike with a small group of Scouts.

The problems started about 1 p.m. Saturday when park officials received a call from the Mohave County sheriff’s office stating four Boys Scouts where lost near the Arizona Hot Springs, following with another call nearly 80 minutes later that two adult males were suffering from heat stroke.

According to the Las Vegas Review-Journal, Bowman was hiking with a group of nine , including seven Boy Scouts ages 10 to 17 and two adults about four miles southeast of Hoover Dam.

The group planned to start their trek early, well before they thought the heat would become dangerous . Lake Mead Park Ranger Supervisor Mark Hnat told the Review-Journal the group arrived at the hot springs about 9 a.m. But the temperatures spiked, hitting triple digits before 10 a.m.

Disoriented, the group broke up. Bowman, along with four of the Boy Scouts, took a different route back to the White Rock Trailhead, located near U.S. Highway 93.

A 39-year-old man with the hikers, who was not identified, went to search for Bowman’s group. But he began to suffer from heat stroke, the National Park Service said.

The four Scouts were three miles past the Mike O’Callaghan-Pat Tillman Memorial Bridge near Hoover Dam with better phone reception when calls were made, Hnat said. Bowman was at a lower point with no phone reception.

“Our sympathies go out to the Bowman family,” Christie Vanover, park spokes woman, said in a statement. “We are thankful that, with the support of around 30 first-responders, the others were safely rescued. The boys were very brave this afternoon as they tried to explain their location to our dispatchers.”

While the Park Service was busy searching for the lost Scouts and leaders, a foamy substance and a number of dead carp near the Overton Arm of Lake Mead caused the service to advise visitors to avoid swimming in the area.

“Until we know for sure what is creating the foam and what is causing the fish to die, we advise people stay out of the water in the Overton Arm,” Vanover said Saturday.

The Park Service was still urging people to stay out of the water along the 8-mile stretch while the Southern Nevada Water Authority conducted tests.

The carp and foam , found by a park volunteer, stretched from the mouth of the Virgin River to as far south as Echo Bay Marina.

Authority spokesman Bronson Mack told the Review-Journal carp are the only dead fish found so far, which hints at a virus rather than “a toxic substance” affecting all living things in the reservoir.

However, Lake Mead supplies about 90 percent of the drinking water used in the Las Vegas Valley, so officials are treating the situation with what Mack called “an abundance of caution.”

All of Lake Mead remains open to boating and fishing, “though I don’t know that I’d catch and eat any fish until we know more,” Vanover told the Review-Journal.

Although the first two stories made headlines locally, it was the Friday arrest of environmental activist Erin Brockovich-Ellis that made national headlines.

The 52-year-old, who was portrayed by Julia Roberts in a 2000 movie , was arrested for boating while intoxicated . Her blood alcohol level was found to be .08, twice the legal limit. She was released from the Clark County Detention Center after posting $1,000 bail.

According to the arrest report released by the Clark County district attorney’s office Tuesday, Brockovich-Ellis is being charged with the misdemeanor crime of operating or in actual physical control of a power or sail vessel while under the influence of intoxicating liquor.

Brockovich-Ellis threw a cell phone into the water and slapped her husband, according to the report. A marina attendant said the pair “appeared to be highly intoxicated.” Brockovich-Ellis tried to back the boat out of a slip, but a game warden approaching the couple and instructed her to park the boat.

After she stated that “she wasn’t very good at driving her boat,” the warden helped pull the boat back into dock.

The warden, Casen Haslem, said in the arrest report that Brockovich-Ellis slurred her answers and that the warden “could also smell an alcoholic beverage on her breath.”

The activist issued an apology Sunday.

“At no time was the boat away from the dock and there was no public safety risk,” Brockovich-Ellis said in a statement “That being said, I take drunk driving very seriously, this was clearly a big mistake, I know better and I am very sorry. After a day in the sun and with nothing to eat, it appears that a couple of drinks had a greater impact than I had realized.”

She is scheduled to appear in Henderson Justice Court on Oct. 7.