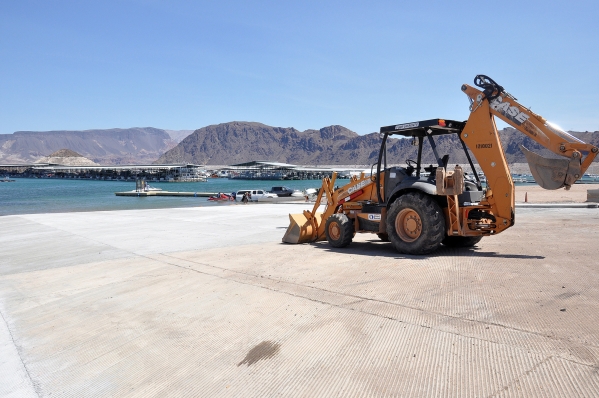 Launch ramp conditions at Lake Mead have improved significantly thanks to an ongoing $1.5 million construction project that began in late July.

The project involves underwater excavation, dredging, grading and building reinforced concrete ramps. The concrete ramps will extend down to the water’s edge, and concrete panels or steel pipe mat will extend roughly 6 feet below the current lake water surface, according to the National Park Service.

Construction is happening at five launch ramps: Echo Bay, Callville Bay, Hemenway Harbor, Temple Bar and South Cove. At least one lane will remain open at each ramp during construction.

According to park officials, all interim ramps are in good condition with easy launching, though conditions can change daily. They ask boaters to survey the area before launching to make sure it’s suitable for their vehicles and boats.

At Boulder Harbor, which has a launch ramp down to an elevation of 1,060 feet, crews are dredging the harbor channel 15-18 feet below the water’s surface. Navigational aids are in place to guide boaters around dredging.

All ramp work is scheduled to be completed by the end of September.

Funding for the project was provided by fees collected at entrance stations and the Southern Nevada Public Land Management Act.