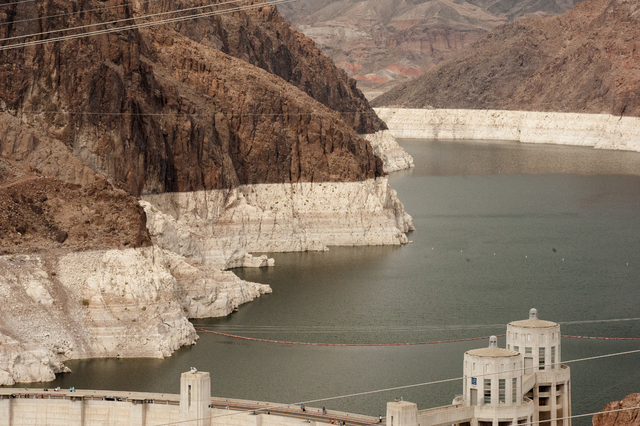 Lake Mead is expected to shrink low enough by January 2017 to trigger the first federal shortage declaration on the Colorado River, according to a bleak new projection from the U.S. Bureau of Reclamation.

In its monthly forecast issued recently, the bureau predicts the reservoir could start 2017 as much as 15 feet below the shortage line of 1,075 feet above sea level.

Only a month ago, forecasters expected the Colorado River to narrowly avoid a shortage in both 2016 and 2017.

If accurate, the new prediction would force Nevada to reduce its Colorado River water use by 4 percent while Arizona and Mexico take larger cuts.

Southern Nevada Water Authority officials insist such a curtailment won’t affect the Las Vegas community because its residents have already reduced water consumption by more than enough to absorb it.

Potentially more alarming is the even deeper dip Lake Mead is expected to take next year, when it could fall low enough to reduce power generation at Hoover Dam and shut down one of the intake pipes that supplies the Las Vegas Valley with 90 percent of its water.

Already in record-low territory, the lake surface is expected to drop another 4 feet by the end of June, to 1,073 feet above sea level. After that, forecasters expect the water to gradually rise again, to elevation 1,077 by January, before plunging about 22 feet in six months to a all-time low of 1,055.

Should the lake hit 1,050, the Southern Nevada Water Authority will lose the use of one of its two existing intake pipes, although that will be less of a concern after September, when a new $817 million intake should start drawing water from the deepest part of the lake.

On paper, Hoover Dam is also supposed to stop generating electricity. However, that minimum generation level is expected to be revised downward, to 950 feet above sea level, because of ongoing power turbine improvements.

Four of Hoover’s 17 turbines have been retrofitted to run more smoothly as the reservoir continues to drop, and two more are to be upgraded in the coming year, Bureau of Reclamation spokesman Doug Hendrix said.

Since the lake has never been so low, Hendrix said, more study is needed to see whether the remaining, unimproved turbines can operate safely below the 1,050 mark.

“The new wide-head turbines will,” he said, but it remains to be seen how the older turbines might handle the strain. “You never want to operate your turbines when they’re in distress.”

A reduction in output from the dam could increase costs for power customers by driving up the price of available hydropower and forcing utilities to buy needed electricity on the spot market. That’s what worries Jayne Harkins, executive director of the Colorado River Commission of Nevada, the agency responsible for managing the water and power resources the state gets from the river.

“The bottom line is our customers’ energy costs go up when the hydropower generation goes down,” Harkins said in an email. “It is one of the costs of the drought that is not well-known.”

The Bureau of Reclamation’s latest projections are 17 feet lower than they were last month, when forecasters predicted a reservoir level of 1,078 feet above sea level for January 2017. Now they expect the lake to be at elevation 1,061 by the start of 2017, a 500 billion gallon difference for the nation’s largest-capacity man-made lake.

The bureau’s monthly forecasts assume average or better snow in the mountains that feed the Colorado River, but that’s only happened three times in the past 15 years. This year, the overappropriated river — a key source of water and power to about 40 million people in the U.S. and Mexico — is expected to receive only about half of its normal flow, marking the 12th below-average year since 2000.