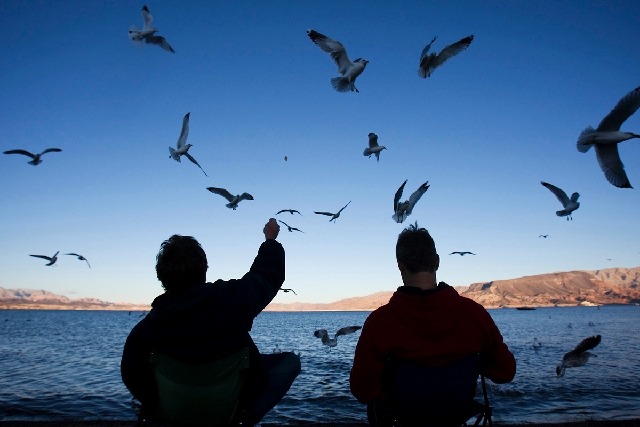 All the glory goes to Yellowstone, Yosemite and the Grand Canyon, but Lake Mead continues to be the people’s park.

The national recreation area outside Boulder City ranked fifth on the list of the most visited places in the National Park System last year, besting every national park except one: the Great Smoky Mountains on the Tennessee-North Carolina border.

Almost 6.3 million people visited lakes Mead and Mohave in 2012, topping all but four of the nearly 400 sites managed by the National Park Service.

Lake Mead spokeswoman Christie Vanover credits the park’s popularity to sunny weather and its proximity to Las Vegas, one of the world’s most popular tourist destinations.

But it’s not quite as popular as it used to be.

Vanover said the economic downturn has taken a toll, prompting many households to cut back on “discretionary spending.”

“Boating can be kind of an expensive pastime,” she said.

The service has tried to capitalize on Lake Mead’s popularity in recent years with new entrance fee stations on Northshore Road and at Cottonwood Cove in Nevada and at Temple Bar in Arizona.

Another fee station is slated to open near Willow Beach on the Arizona side of Lake Mohave later this year.

Meanwhile the visitor center for the 1.5 million-acre recreation area has reopened after extensive renovations and the addition of a new high-definition movie about the park, but the facility’s hours of operation were cut starting this week.

The Alan Bible Visitor Center, off U.S. Highway 93 east of Boulder City, will be open from 9 a.m. to 4:30 p.m. Wednesday through Sunday and closed on Mondays and Tuesdays.

Vanover said Lake Mead’s visitor numbers do not include tourist traffic at Hoover Dam or the 4.5 million vehicles that drove through the park on U.S. 93 last year.

Other parks with higher visitation include some commuter traffic in their totals, she said.

At the opposite end of the spectrum is Great Basin National Park, 300 miles northeast of Las Vegas.

The only national park located entirely in Nevada is also among the least visited in the nation. Last year, it attracted 94,850 visitors, its highest total.

He said a steady increase in visitor volume in recent years has helped pay for the addition and expansion of campgrounds, but it hasn’t spoiled one of the park’s chief attractions: solitude.

Even in a record year such as 2012, Great Basin drew less than a third as many visitors as Lake Mead saw during Memorial Day Weekend alone.

“You can still get out of your car and walk into the backcountry a mile or two and pretty much have the whole park to yourself,” Williams said. “It’s one of the hidden jewels of the National Park System.”

And there is one added perk: Great Basin does not charge an entrance fee.