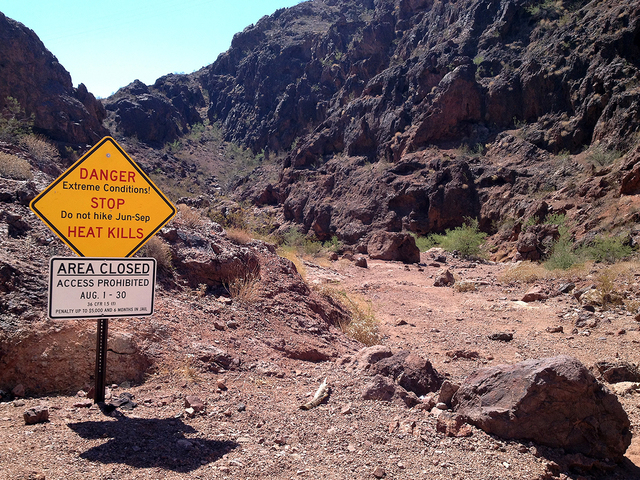 Lake Mead’s Goldstrike Canyon and Arizona Hot Springs trails were shut down temporarily in the summers of 2014 and 2015 after “public safety incidents” went up significantly, the park service wrote in a release.

There were no deaths on either trail in 2015, when the trails were closed the entire summer, park service spokeswoman Christie Vanover said. Crews made four rescues on the Goldstrike Canyon trail and 11 in the White Rock Canyon area, which holds the various pathways of the Arizona Hot Spring trail.

Many of the search and rescues on the trails are related to injuries, heat exhaustion or disorientation, Vanover said. When hikers are injured or experience heat exhaustion, often the result of hikers not bringing enough water on their treks, rescue employees have to carry them out of the canyons in “extreme heat.”

One of the challenges with the two trails is that the hike down to the river isn’t all that difficult, Vanover said.

“The hike back, however, is very strenuous,” she said. “Down is optional; up is mandatory.”

Management at the park posted signs to warn against the dangers of hiking during the summer, but people hiked the trails anyway, “endangering their lives and the lives of other visitors and rescue crews,” the park service wrote.

The proposal up for discussion would turn the emergency closure into a permanent seasonal closure. The trails would be closed May 15 through Sept. 30 every year.

“During the closure period, visitors may still access the popular hot springs via the Colorado River,” the release said. “Other less strenuous trails through the park will also remain open.”

Anyone who chooses to hike during the summer should follow “summer safety tips” listed on the park service’s website, the release said.