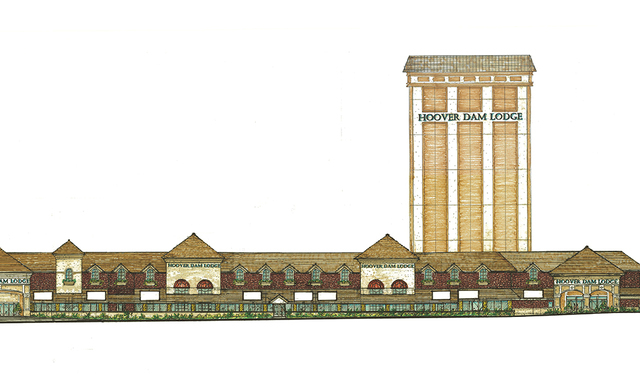 The Hacienda Casino will soon be named Hoover Dam Lodge, according to tavern operator Dotty’s, which is in the final stages of purchasing the property.

Dotty’s parent company Nevada Restaurant Services Inc. announced in a statement Friday that the property will be renamed once an extensive remodel nears completion.

Also released was an exterior rendering of what the hotel and casino will look like after planned renovations, which will include restaurants, bars, gaming machines and updated hotel rooms. A company spokesman said live table games will be replaced with electronic versions of blackjack, craps and roulette.

Dotty’s, which operates more than 80 taverns statewide, with more than 1,000 employees, announced the pending acquisition in August. The property will be the first Dotty’s hotel-casino property.

The sale is scheduled to be finalized upon the receipt of licensing approvals. Nevada gaming regulators and the Clark County Commission are expected to weigh in on the sale next month.

After the sale, Dotty’s plans to close for a few days before reopening.

“Rather than closing down entirely for a six-month remodel, we will operate on a limited basis while simultaneously remodeling. Although this requires a longer renovation period, it also allows the property to remain open for its regular customers and provides employment opportunities,” said Dotty’s founder and CEO Craig Estey. “We merely ask for everyone’s patience during the construction period.”

Current Hacienda employees were told they would have to reapply to work at the Dotty’s-owned property. Additionally, Dotty’s announced that it plans to promote from within the company.

The Hacienda sits on 11 acres on the north side of U.S. Highway 93 on the road to Hoover Dam and the Mike O’Callaghan-Pat Tillman Memorial Bridge. The property also includes 21 acres across the street, now occupied by a gas station.

The Hacienda is currently owned through a partnership between Michael Ensign, William Richardson and David Belding, son of founder and Boulder City businessman Don Belding.

The owners first talked of selling the Hacienda in 2003, but no buyer ever materialized. The Bureau of Land Management tried to acquire the property in 2004.

The former Gold Strike Inn first opened in the 1950s, but was renamed after a fire in June 1998 destroyed the casino, but not the hotel. The Hacienda opened in November 1999.

The 33 acres are bordered by federal land, including Lake Mead National Recreation Area, which has tried to acquire the property for seven decades.

The casino sits nearly 2½ miles south of Boulder City, which does not allow gaming within its city limits. However, many of its nearly 250 employees live here.