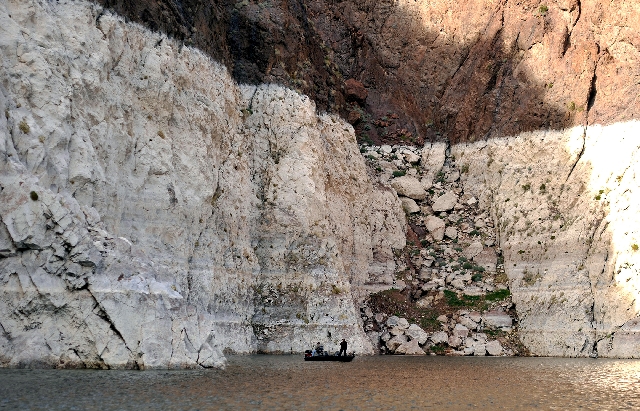 An environmental advocacy group has named the Colorado the nation’s most endangered river, just as federal forecasters sounded warnings about lower flows and deeper declines in Lake Mead.

American Rivers placed the Colorado at the top of its annual list because of drought, the emerging effects of climate change and what the group called “outdated water management practices” that have allowed demand to outstrip supply.

The Washington, D.C.-based group rolled out its ranking April 17, days after water-supply experts downgraded their projections for the river and Lake Mead in the face of a second bad winter in a row in the mountains that feed the system.

In late February, forecasters were predicting a 13-foot drop over the next year in the reservoir east of Las Vegas. They say there is a 65 percent chance that the lake will drop 23 feet by April 2014 and 30 feet by March 2015, when the water level could approach an all-time low.

Although snow is still falling in some parts of the Rocky Mountains, “there’s no real way to pull this out of the fire at this point,” said Randy Julander, who supervises the federal snow survey program in Nevada, Utah and California for the Agriculture Department.

“It’s definitely going to be two bad years in a row.”

Less snow in the mountains means lower flows in the Colorado, which provides drinking water to more than 35 million people from Denver to Los Angeles. The Las Vegas Valley relies on the river for 90 percent of its water supply.

It will mark the second year in a row that the Colorado will flow at less than half of its historic average.

As a result, forecasters say it is likely that Lake Powell, on the Utah-Arizona border, will shrink enough in the coming months to cut its downstream delivery to Lake Mead by 750,000 acre-feet. That’s three times as much water as the entire Las Vegas Valley used last year.

If — or perhaps when — the lake hits the 1,075-foot mark, it will trigger a federal shortage declaration and force Nevada, Arizona and Mexico to cut their river use. It will also prompt a vote by the Southern Nevada Water Authority Board on whether to build a controversial, multibillion-dollar pipeline to tap groundwater from eastern Nevada.

Under normal conditions, Lake Powell releases at least 8.23 million acre-feet of water downstream to Lake Mead for use by Nevada, Arizona, California and Mexico.

If the latest projections from the U.S. Bureau of Reclamation come true, the release from Powell will be cut to 7.43 million acre-feet to allow the upstream reservoir to recover.

That will only exacerbate the math problem facing the West’s most regulated and relied-upon river: The Colorado is overdrawn. Even in an average year, the river does not carry enough water to fill the allocations parceled out decades ago to seven Western states and Mexico.

“The Colorado River, the No. 1 most endangered in the nation, is so overtapped that it dries up to a trickle before reaching the sea,” American Rivers President Bob Irvin said in a statement accompanying the group’s report. “We simply cannot continue with status quo water management.”

Water Authority Deputy General Manager John Entsminger said he couldn’t really respond to a report he hasn’t seen, but he agreed that the Colorado is under serious strain.

He said those who share the river have responded with historic new cooperative agreements aimed at stretching supplies and sharing shortages. The latest was a treaty amendment with Mexico, forged lasut year, that could restore water to the river’s delta through a pilot program slated to start in 2014.

Entsminger said the new river projections are troubling, but the situation could be worse.

“If not for the efforts of the nation of Mexico, the Metropolitan Water District of Southern California and the SNWA, Lake Mead would be 10 feet lower than it is today,” he said.

Those three entities are able to store their unused river allotments in the lake under interstate and international agreements forged over the past several years.

This year’s snowfall was “almost a carbon copy” of last year’s, Julander said, but the effect of below-average precipitation will be felt a lot more because the soil in the mountains was so dry and the river’s reservoirs were already low.

The spring and early summer of 2012 were “bone crushingly dry and hotter than a two dollar pistol,” Julander said, but the basin was still flush with water from 2011, which proved to be the third wettest winter on record.

Lake Mead has lost more than 90 vertical feet of water since drought took hold on the Colorado in 2000.

The drop has wreaked havoc on marinas and other recreational infrastructure at the lake and rattled the nerves of water managers across the region.

Entsminger said the authority has enough water in reserve to continue normal operations even if the lake sinks below 1,075 feet and into shortage. But no one wants to see what could happen if the lake keeps shrinking from there.

If the lake ever reaches the 1,025 mark, Hoover Dam will stop generating electricity, “and water quality becomes a real concern,” he said.

The authority is in the midst of the most expensive construction project in its history — the more than $800 million third intake tunnel — to keep water flowing to the Las Vegas Valley should Lake Mead drop to 1,050 feet, low enough to shut down one of the two existing straws.

That project is slated for completion by summer 2014.