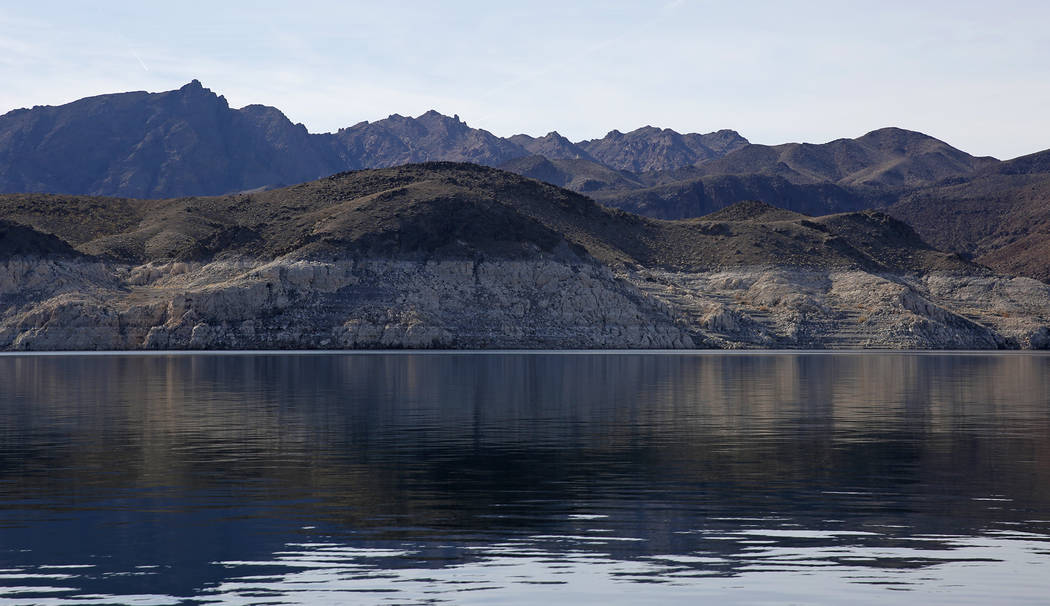 Andrea Cornejo/Las Vegas Review-Journal A high water line, which shows where the water once reached, is seen on rock face in the Lake Mead National Recreation Area, Nevada on Jan. 17. Despite a dry winter in the mountains that feed the Colorado River, this year's forecast for the lake is slightly improved.

Winter is off to an alarmingly dry start across the Colorado River Basin, but you wouldn’t know it from the latest federal projections for Lake Mead.

January’s monthly report by the U.S. Bureau of Reclamation offers a slightly sunnier outlook for the reservoir than the agency had predicted in December, though both projections say the lake will finish the year about 5 feet lower than it is now.

Miller said conditions have been terrible so far this winter in the mountains that feed the Colorado. “It might be a historically bad start,” he said. “It’s up there.”

The Bureau of Reclamation’s regional office in Boulder City did not immediately respond to requests for comment on the new report.

Snow accumulations in some key parts of the river basin are only about a quarter of where they would be by mid-January of an average year.

As a result, the river is expected to carry only about half of its usual flow between April and July, when most of the snowmelt and runoff traditionally occurs.

Despite the bleak outlook, forecasters still expect Lake Mead to have enough water stored in it on Jan. 1, 2019, to avoid a first-ever federal shortage declaration that would force Nevada and Arizona to cut their use of the Colorado River.

The Las Vegas Valley draws about 90 percent of its water supply from the Colorado by way of Lake Mead. Most of the water in the lake began as snowfall in the mountains of Utah, Colorado and Wyoming, but those ranges have seen more dry years than wet ones over the past two decades.

If the current forecast holds, this would mark the 15th year of below-average flows on the Colorado River in the past 19 years. The surface of Lake Mead has fallen more than 130 feet over that period.

The current projections show Lake Powell shouldering most of the impact from the latest dry winter.

In December, the Bureau of Reclamation was projecting a roughly 14-foot drop by the end of 2018 in the reservoir on the border of Arizona and Utah. Now forecasters expect the surface of Lake Powell to finish the year 23 feet lower than it was on Jan. 1.

Miller said it already seems like a foregone conclusion: This is going to be a lousy year for the river that supplies water to some 30 million people across the West.

“There’s probably a less than 10 percent chance that we could get back to normal at this point,” he said. “That early season snowpack can play a significant role, and we just haven’t had it this year.”