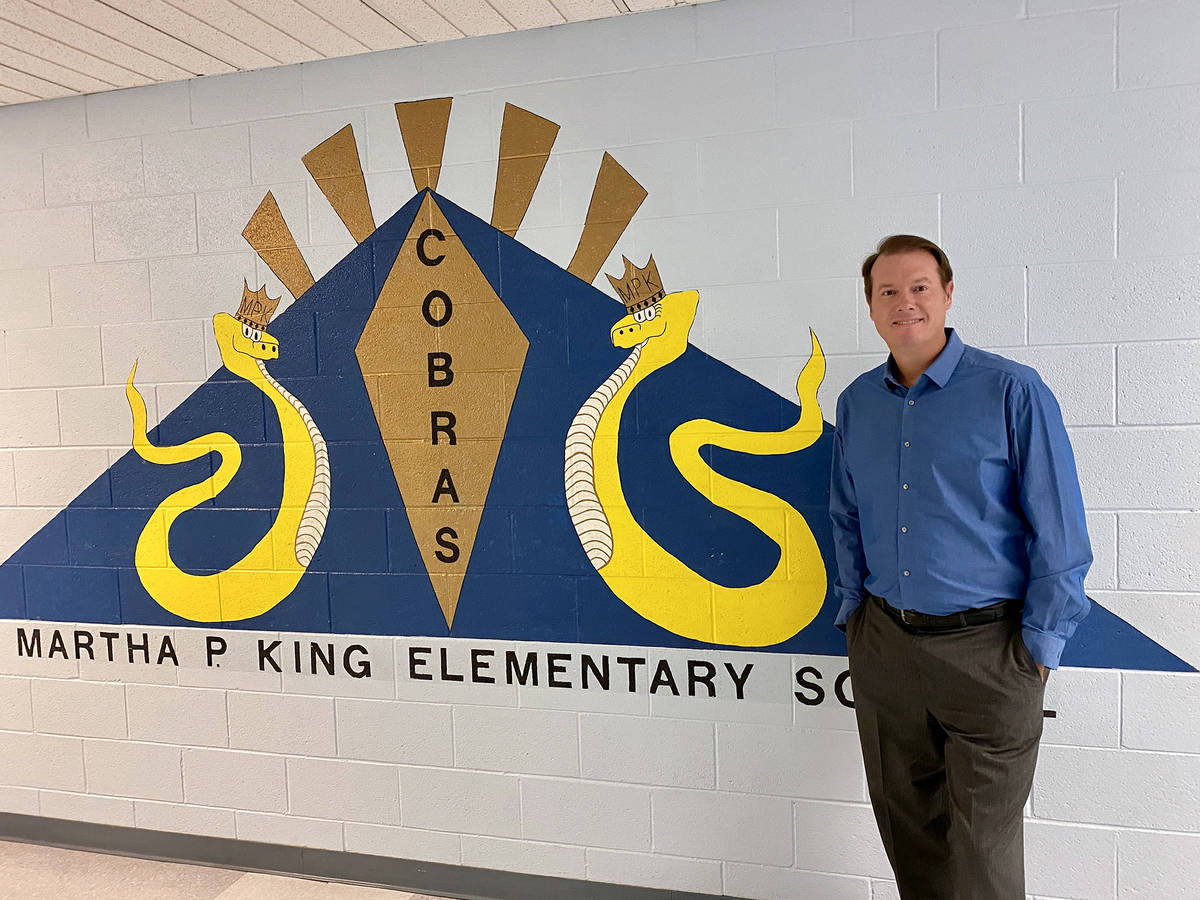 (Jason Schrock) King Elementary School's new principal, Jason Schrock, is excited to return the community where he grew up and his parents still live.

Jason Schrock was recently named the principal of King Elementary School. He is replacing Anthony Gelsone, who retired at the end of last school year.

Schrock moved to Boulder City with his family when he was 3 years old and attended all four public schools. He is a 1997 graduate of Boulder City High School and, while in college, did his student teaching at Mitchell Elementary School. After college, he moved to Las Vegas where he started working for the Clark County School District. His parents stayed in Boulder City and still live in his childhood home.

In January, Schrock, his wife Amber and their three children moved back to the area.

“We just love the community here,” he said. “It’s one of those places where family is important.”

When they moved to Boulder City, Schrock was working as the principal of Hayden Elementary School in North Las Vegas. He was there for four years before taking the position at King.

His oldest son, Bryce, will be a student at King.

“I love the idea of being back here and being the leader of the school where my kids will go,” he said.

Schrock also said he is looking forward to working with his neighbors and the teachers at the school.

“Not only will this move to King help serve our family, but it will also serve the community,” he said.

With the online start to the school year and the other challenges brought on by the COVID-19 pandemic, Schrock said he has been working on the school’s distance learning plan.

“I’m excited to share that with the staff and parents,” he said. “It’s going to look very different than what it looked like in the spring.”

He said he is also looking forward to partnering with the other schools in town and their principals.

“They’re genuinely nice people,” he said. “I’m excited to work with them.”

The other principals in town said they feel the same way.

“I’m excited about having Mr. Schrock join our community as the principal at King,” said Ben Day, principal at Mitchell. “He and I have already gotten together and have had multiple discussions on what we can do to work together in a way in which both schools will benefit. He will be a great asset to King Elementary and a great resource to me as his colleague.”

“Jason will be a great asset to the King Elementary School and the Boulder City community,” said Garrett Junior High School Principal Melanie Teemant. “I’ve already learned that he is very innovative and has a great vision for the school and staff, and is excited to be part of our Boulder City administrative team. I can’t wait to work with him as we collaborate and support our community during this unprecedented time.”

“I am excited to welcome Jason to the Boulder City family and have enjoyed working with him to promote the schools in Boulder City the last couple of weeks,” said Boulder City High School Principal Amy Wagner. “I feel he is an added asset to our community and it is a bonus that he is a BCHS graduate. Go Eagles!”

In his downtime, Schrock said he and his family enjoy riding their bikes, hanging out at Veterans’ Memorial Park and doing all sorts of outdoor activities. This year marks his 17th working for the Clark County School District. He taught for seven years and was an assistant principal for six before becoming principal at Hayden Elementary.