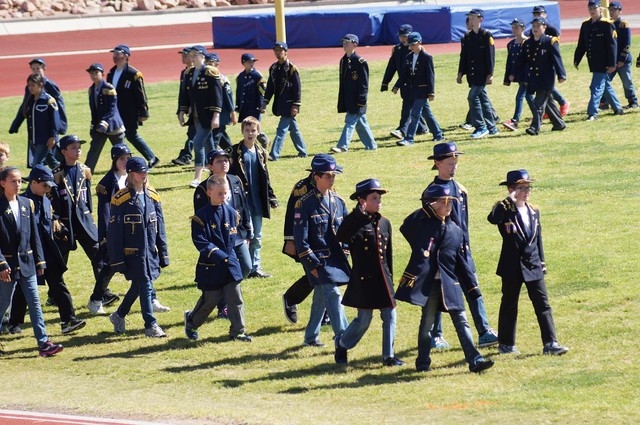 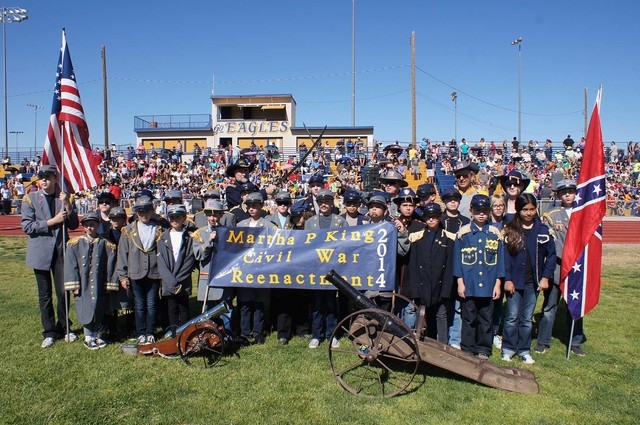 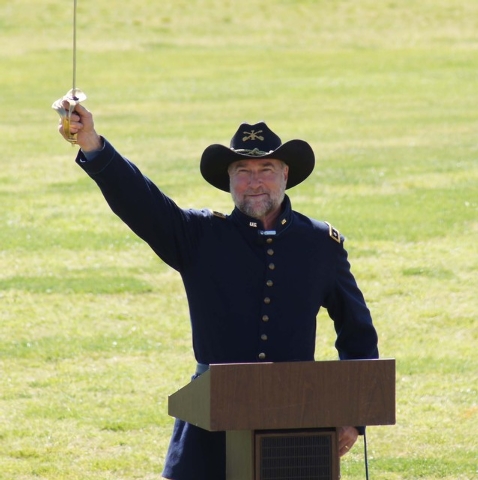 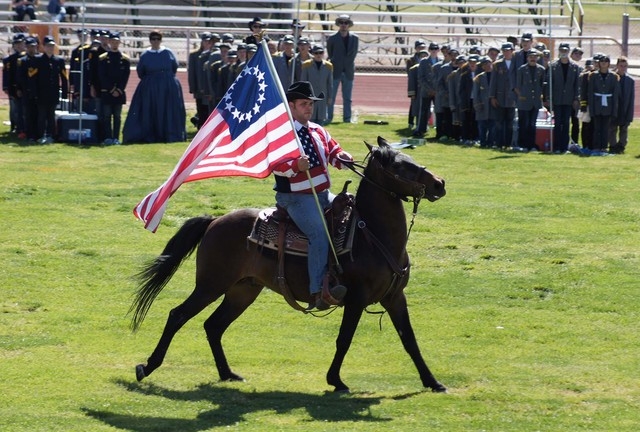 At the back of the double-file line, a girl played the drums in unison with the commands.

One by one, half of the them dressed in navy blue and the other half dressed in gray, with hats, drawn-on mustaches and beards, the fifth-graders from King Elementary marched to the Boulder City High School football field for the 28th annual Civil War re-enactment Friday morning.

From the authentic Confederate and American flags flying high, the presentation of military history and the four men on horseback to open the show, the Civil War re-enactment featured everything but the Gilded Age sideburns.

“This is a great day for war,” announced former Boulder City teacher Harold Coe to the hundreds of students sitting in the bleachers waiting for the battle to begin.

Like Coe, Tobler spent decades in the Clark County School District. He helped start the Civil War re-enactment nearly 30 years ago and has participated every year since. He described the event as “hands-on” learning, a useful tool to engage students in the history of the Civil War.

“They see the reasons for war, and why people fought for slaves,” Tobler said. “We try to point out that this war was to free people.”

As the fifth-graders awaited the battle to begin, the fourth-graders from King Elementary dressed as miners and cowboys made their way around the field behind Nevada’s state flag. With makeshift guns, shovels and axes in hand, they led the audience in the singing of “Home Means Nevada.”

Fourth-grader Travis Wood gave a brief history of the state and the importance of its statehood during the Civil War.

President Abraham Lincoln wanted Nevada statehood to help pass the 13th Amendment to the Constitution, which abolished slavery in the United States. Nevada, which had been a U.S. territory since 1861, achieved its statehood on Oct. 31, 1864. It was the only state to be admitted to the Union during the Civil War, helping it earn its nickname as “The Battle Born State.”

After the fourth-graders exited the field, two cannons were fired and the battles began.

Separated by about 15 yards, the fifth-graders hurled more than 1,000 water balloons at their opponents as they re-enacted the battles of Fort Sumter, Bull Run, Vicksburg, Monitor and Merrimack, and Gettysburg.

Before each battle, one student would tell a short history about that battle to the audience. Then, after Tobler blew his bugle to commence the start of each fight, the water balloons flew.

Principal Tony Gelson said he sees the re-enactment as a learning activity, but said there have been some parents in the past who haven’t liked the idea of re-enacting a war.

“It’s a learning activity for them,” Gelson said. “Usually I’ll get a complaint that we’re allowing the kids to simulate war, or that we’re glorifying war, but no complaints this year.”

After the battles were fought, the students then re-enacted the South’s surrender at the Appomattox courthouse on April 8, 1865. Shortly after, they re-enacted Lincoln’s assassination at Ford’s Theatre.

Jamison Kaboli, dressed as Lincoln, complete with a beard and top hat, clutched a bouquet of flowers as he lay in a red wagon to simulate Lincoln’s funeral train. In 1865, Lincoln’s funeral train traveled to seven states and more than 180 cities as it made its way from Washington, D.C., to Lincoln’s burial place in Springfield, Ill.

The adaptation was informative and entertaining for the future Civil War actors who saw got a firsthand glimpse of what they’ll experience once they hit the fifth grade.

Tobler said some fifth-graders had told him they had been waiting to participate in the Civil War re-enactment since they were in kindergarten. He’s hopeful they’ll use what he described as “live learning” as an opportunity to gain an appreciation for history and their fellow human beings.

It’s rewarding for him.

“I want them to appreciate life, appreciate their freedoms and appreciate what those people sacrificed,” he said.