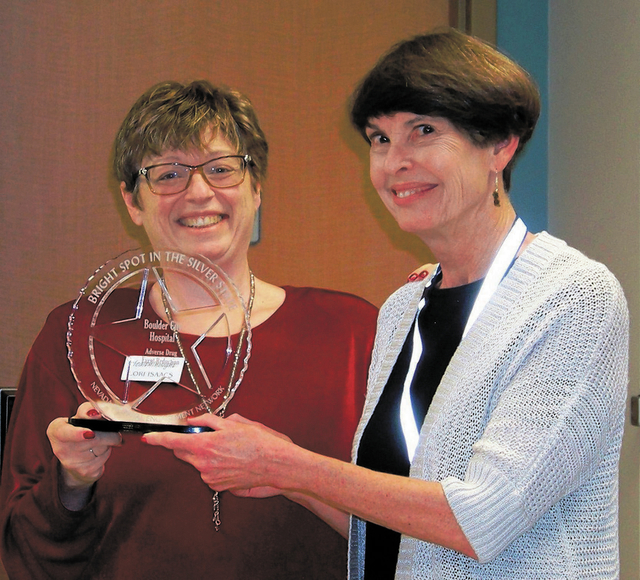 Boulder City Hospital received the Bright Spot in the Silver State Award Dec. 27 for its work in reducing adverse drug events in patients. The recognition was given by the Nevada Hospital Engagement Network, a partnership of the Nevada Hospital Association and HealthInsight.

The Nevada organization is one of 26 Hospital Engagement Networks nationwide. Together, the networks represent more than 3,700 hospitals supporting Partnership for Patients’ goals, according to its website and the website for the Centers for Medicare and Medicaid Services.

Reducing adverse drug events in the hospital is “one of the primary reasons for injuries throughout the United States in patients” and “readmissions … into the hospital,”said Lori L. Isaacs, project manager for the Hospital Engagement Network.

Isaacs presented the award to Nancy Tardy, pharmacy manager at the hospital, who, she said, “has worked very hard to reduce medication-related harm” to patients. Isaacs also gave everyone in the audience, including hospital board members, staff and patients, a handout describing the network’s objectives and the goals of Partnership for Patients, an “initiative sponsored by the Department of Health and Human Services to improve the quality, safety and affordability of health care for all Americans.”

Hospital statistics presented by Isaacs showed that the team of pharmacy, nurses and doctors have reduced adverse drugs events relating to blood sugar by 13 percent and those related to narcotics by 45 percent.

Isaacs also recognized Andre Pastian, the hospital’s chief nursing officer, for her efforts and the “outstanding job” she coordinated to reduce adverse drug events throughout the hospital.

“I don’t think there is any one person who can take credit for this (award). It’s a team. It’s our pharmacy. It’s our nursing staff. It’s our physicians that we work with. I think everyone needs to be recognized for what they have accomplished,” she said.

“If they (the patients) can leave here without having to be on a narcotic,” using an over-the-counter medication for pain is “the best goal in the world,” she added.

Pastian said that the statistics used to garner the award for the hospital were gathered from information collected beginning in 2010, the baseline for Boulder City Hospital’s reporting. She said “there is a whole bucket list” of statistical medication information that is reported on a monthly basis to the network.

Pastian said the numbers show that the hospital team “made some really significant improvements; it’s the start of many” in the reduction of adverse drug events in patients.

“Sometimes the best thing an administrator can do is get out of the way and let the people who know what they are doing do their jobs. I am very proud of this accomplishment,” said Tom Maher, the hospital’s CEO.

He thanked the entire hospital clinical team for the time and effort that went toward reducing adverse drug events.

After the award presentation, Isaacs spoke about the Boulder City Hospital team, which she described as being “very dedicated to the safety of their patients” and “dedicated to the community.” She felt that the closer you are to the patients, as is the case at Boulder City Hospital, the more this dedication is visible. She described this by saying that the hospital employees are taking care of their neighbors.

In discussing the larger community wellness issue, Isaacs said “small community hospitals like this (Boulder City Hospital) can sell the product of total wellness better than just hospital care” and show the patients they can come to the hospital to be “more responsible for their own health” and “do the right thing” when it comes to living a healthy lifestyle.