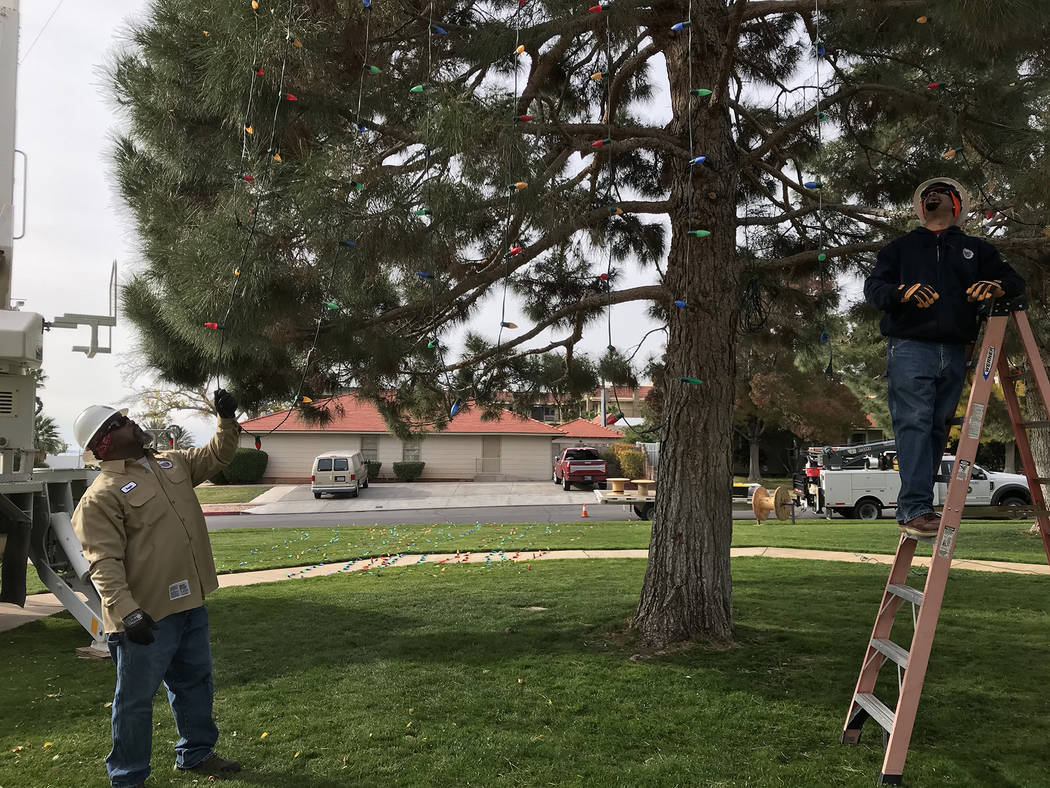 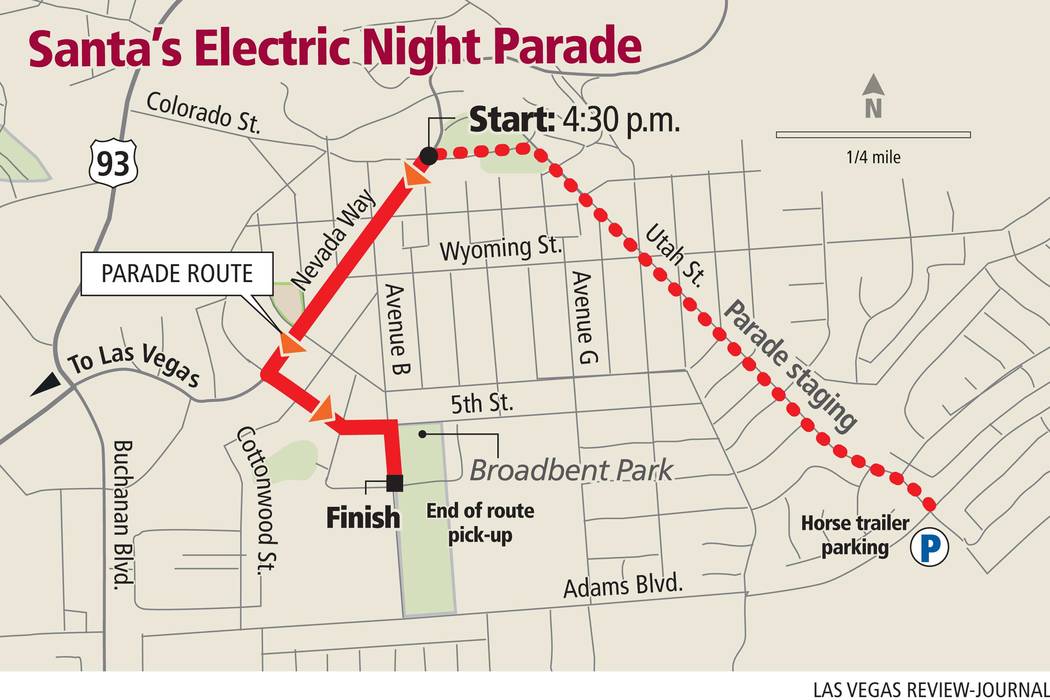 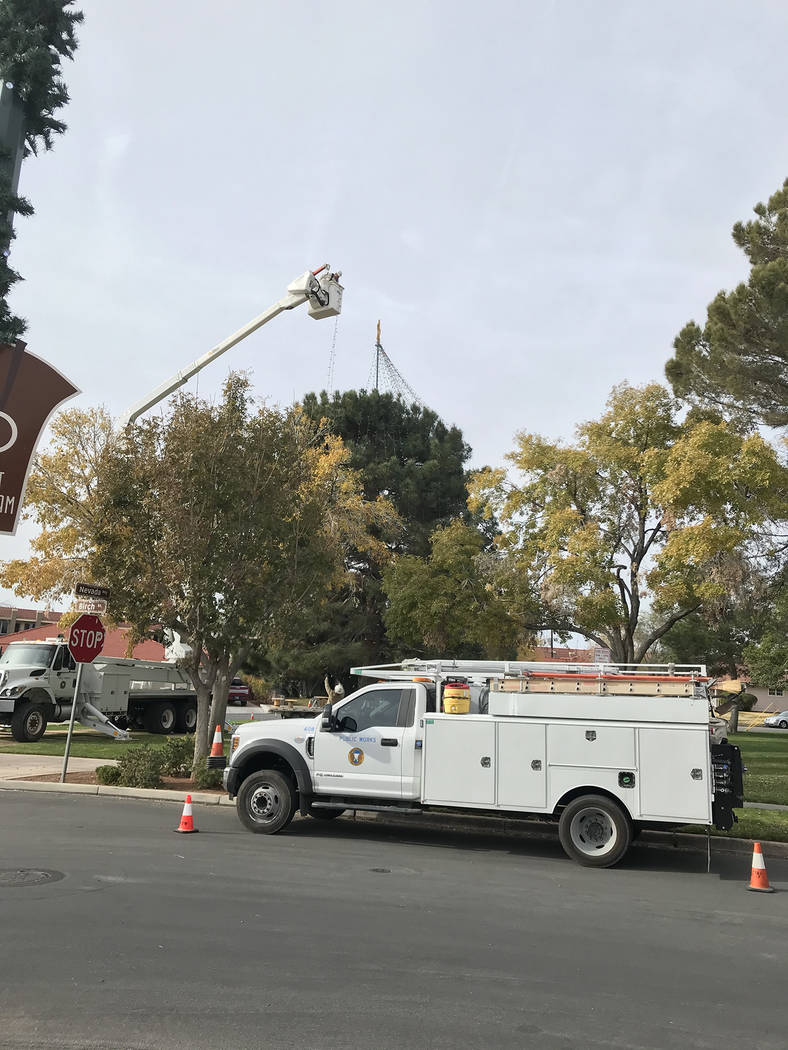 (Hali Bernstein Saylor/Boulder City Review) Frank Apaceche from the city’s electrical department was perched in a bucket to reach the top of the tree in Frank Crowe Park on Tuesday, Dec. 3, in preparation for Friday’s Christmas Tree lighting celebration.

The holiday season officially starts today in Boulder City, and with it come several long-standing traditions throughout the weekend.

The Luminaria and Los Posadas is at 6 tonight, Dec. 5, at the Boulder City Parks and Recreation Center, 900 Arizona St. This free event features a processional, live nativity, music and a singalong. Hot chocolate will be served afterward.

On Friday, Dec. 6, for the 16th consecutive year, Dale Ryan and Dyanah Musgrave will transform their home at 1525 Fifth St. into a winter wonderland with a ski lift, merry-go-round, Ferris wheel, trains, snowmen and other holiday accents.

“It’s a real labor of love,” said Musgrave. “We love the community. That’s what makes it so special.”

Musgrave said Dance Etc. will be at the home this year performing before the lights are lit. Santa Claus, Mrs. Claus and Jingle Cat also will be there to join the festivities.

She said there are usually hundreds of people at the lighting ceremony, so those who want to attend should get there at 5 p.m. The lights will be turned on at 5:30 p.m.

“We encourage people to bring their families and their pets,” she said. “Last year, we had 500 dogs go through.”

The lights will be on every day from 5-9 p.m. as long as there is no rain or high winds. On Christmas Day and New Year’s Day, the lights will stay on until midnight.

After the house is lit, Santa Claus, Mrs. Claus and Jingle Cat will head to Frank Crowe Park, 537 Cherry St., to light the Boulder City Christmas tree at 6 p.m. Locals will provide entertainment before they arrive, and hot cocoa will be served.

On Saturday, Dec. 7, the festivities start early with the 45th annual Doodlebug Craft Bazaar at the Boulder City Parks and Recreation Center from 9 a.m. to 4 p.m.

It is put on by the Boulder City Community Club. President Cokie Booth said the craft fair will be the same as in past years, with all the crafts having to be handmade, but they are introducing a new Doodlebug mascot. Booth said the show’s signage will reflect the change.

One of the biggest events of the holiday weekend is Santa’s Electric Night Parade on Saturday, Dec. 7; it starts at 4:30 p.m.

“It is the 48th year and we will follow in the same format with the fire department leading the way at 4:30 p.m.,” said Jill Rowland-Lagan, CEO of Boulder City Chamber of Commerce. “We will have Little Mister, Asher Stewart, riding in the fire truck with his grandpa, interim chief Steve Walton, and then Little Miss, Kinsley Irwin, will be bringing up the tail end with the super guest, Santa Claus. … We have some new features at each of the announcers’ stations with new blow-up décor that will help add to the fun and let those sitting near them take pictures.”

There will be almost 100 entries in this year’s parade, and Rowland-Lagan said she estimates it will last 70 minutes.

“We have had a lot of fun conversations with some of the entrants on how they will decorate,” she said. “Some of the floats are getting pretty elaborate. One of them will be leaving our parade and head down to the Parade of Lights at the lake to enter there, too.”

The National Weather Service is forecasting the weather to be cloudy with a slight chance of rain in the evening. Rowland-Lagan said there isn’t an alternate date for the parade because rescheduling it would be near impossible with all the entries.

“We will have to see how bad it is and make a call at the time. We have had it sprinkling one year, and we just went with it,” she said.

The Lake Mead Boating Association’s annual Christmas Parade of Lights starts at 6:30 p.m. at Lake Mead National Recreation Area. It features boats decorated in lights and other Christmas decorations. The parade can be viewed from Boulder Beach.

For a complete list of holiday activities in Boulder City in December, see the event listing on our website.