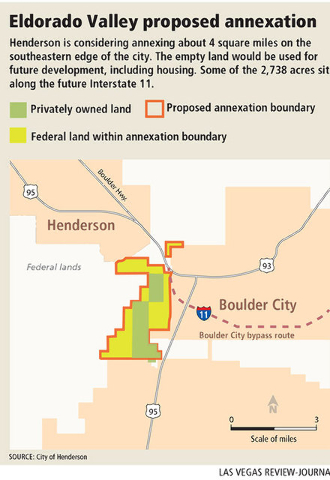 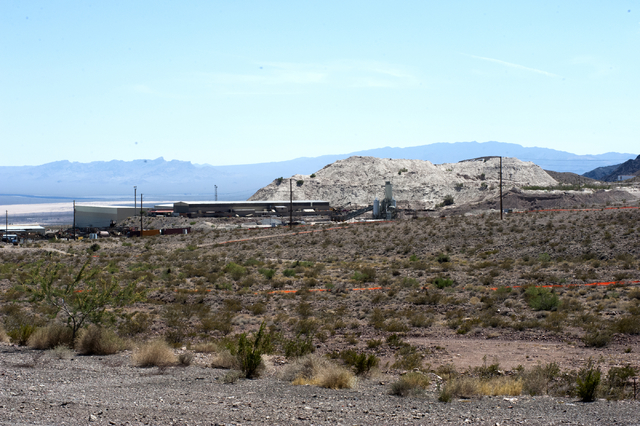 The Henderson City Council voted Tuesday to consider annexing more than 4 square miles of largely empty land in the Eldorado Valley, which could be the site of new homes and businesses.

Some of the land lies along the future route of Interstate 11. Developers and property owners have been talking to city officials about annexation for more than a year.

Still, Tuesday’s unanimous vote directing staff to move forward with planning was far from a final decision. The city still plans months of talks with developers and property owners as it seeks an agreement. Annexation would only happen after at least two more council reviews, as well as a public hearing.

Henderson is looking to add 2,738 acres, mostly south of its current boundaries and west of U.S. Highway 95. Boulder City has bought and annexed much of the rest of the land in the Eldorado Valley to limit development and conserve open land. As a result, it’s 208 square miles — despite having only 15,000 people.

A portion of that land has been designated for solar projects in the Eldorado Valley’s energy zone.

But the boundaries of the annexed area could change, in part because Henderson still hasn’t figured out how it will pump wastewater back into the Las Vegas Valley so the city can get credit for returning it to Lake Mead.

After the Las Vegas Review-Journal reported on the issue Sunday, three residents wrote the council to oppose annexation, with one citing asbestos in the area and two saying more development is unwise given what one called Nevada’s “water crisis.”

Before the vote, council members said they support the idea of annexation but have concerns. Henderson Councilwoman Gerri Schroder said she wants to make sure there are nearby police and fire stations so residents are protected.

Armantrout noted that Boulder City would be hamstrung if Henderson doesn’t incorporate its own services as part of the annexation.

“There’s no way we could ramp up personnel services with our budget,” he said.

Armantrout said Henderson initially inquired about annexation about a decade ago, but decided to look elsewhere once it learned of Boulder City’s limited growth ordinance. Though the bulk of the land is under Clark Clark jurisdiction, a portion of it is privately owned with the intent of building more houses, he said.

Tobler said he would be concerned if a lot of new homes were built in the Eldorado Valley, though some housing would be fine.

Officials from the two cities recently met to discuss how to work together on wastewater issues that could be caused by new development.

“We knew something would happen out there eventually,” Tobler said. “Henderson is being a good neighbor by including us in the process.”

Henderson Councilwoman Debra March called the area “an important gateway into the city of Henderson,” but said there are planning and environmental concerns.

City officials say a fire station, schools and parks, among other public facilities, could be built in the area.

Recalling former mayor James Gibson, Hafen said, “Quite frankly, if he had his way, he’d annex all the way to the California border.”

Armantrout said Boulder City would request that Henderson build new schools as part of the development since Boulder City’s schools would not be able to accommodate many more students.

“We will participate in their report and submit what our comments and concerns are,” he said. “We’ll work them through the process. Boulder City and Henderson have a great relationship.”