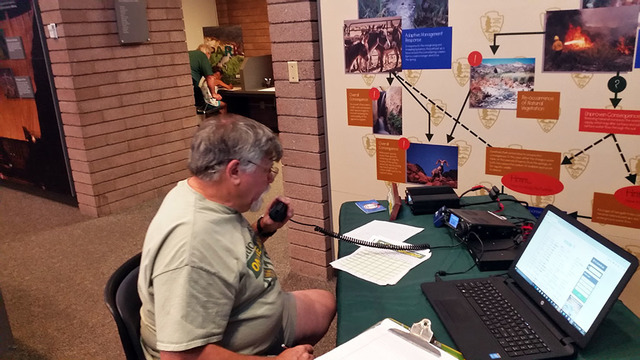 Bob Murray of Virginia Beach, Virginia, makes contact with a park ranger in Arizona on his ham radio while visiting Lake Mead National Recreation Area on Tuesday, July 5, 2016. Murray likes to go to national parks across the country and make contact with other radio operators. Max Lancaster/Boulder City Review

While Bob Murray was taking the long drive from Virginia Beach, Virginia, where he lives to Las Vegas to see a Garth Brooks concert he drove by Lake Mead National Recreation Area and saw an opportunity to participate in one of his favorite hobbies: ham radio.

Ham radio, also know as amateur radio, is a hobby in which people around the world contact each other using only radio equipment. Ham radio requires no internet connection or cellphone and works by bouncing radio signals off the atmosphere.

Murray is not your typical ham radio hobbyist. He is part of a group of radio operators who set up shop in national parks to make contact with each other across the country in a yearlong event called National Parks On The Air. When Murray drove by Lake Mead he knew he had to set up his ham radio and make contact with the 57 other national parks in America. It was so simple to set up shop here, Murray said. I just asked some of the rangers if I could set up my ham radio here and they were thrilled I asked.

Lake Mead is the eighth national park Murray has activated this year for National Parks On The Air.

When Murray sat down at his portable radio station at the Lake Mead Visitor Center on Tuesday, he immediately tried to make contact with parks around the country.

This is K4YOU at RC13, Murray said referring to his radio tag and the parks destination code.

As soon as Murrays voice blared through the radio microphone another voice responded.

Hello this is KOBJ in the park, a park ranger radioing in from Kansas said. I have been to Lake Mead many times and I always have a pleasant time. Thanks for getting with National Parks On The Air.

After each point of contact Murray would write down the location of the radio transmission. Ham radio operators from across the country made contact with Murray at Lake Mead. Calls from Washington, California, Arizona, Illinois and other states all went through the airwaves.

Murray said there are two types of radio operators who participate in National Parks On The Air: activators and chasers.

Activators are people like me who are setting up radios in the park and trying to officially record radio activity and activate the park, Murray said. The other group are chasers who just like to make contact and have conversations with other ham radio operators.

It takes 10 radio contacts to officially activate a park, according to the National Park Service. Murray surpassed that number within the first 30 minutes. Murray said he doesnt use ham radio for any reason other than his own enjoyment.

I am a hobbyist so ham radio is just a fun thing to do, Murray said. I dont have any other reason for doing this except that I like it.

Throughout the day Murray sat in a corner and made contact with other radio operators. People coming to visit the lake looked at him with a sense of curiosity, but no one asked what he was doing or asked to use the radio, a request that Murray would have obliged. Park Ranger Sky McClain tried her hand at ham radio and made contact with a few operators in different states. McClain said it was a great experience, though it was a bit confusing because she did not know the words and codes operators use.

Murray said his experience at Lake Mead was one of the best he has ever had at a national park.

I just really want to thank all the rangers here, Murray said. They really went out of there way to make me comfortable and I appreciate that.

Information for National Parks On The Air can be found at npota.arrl.org