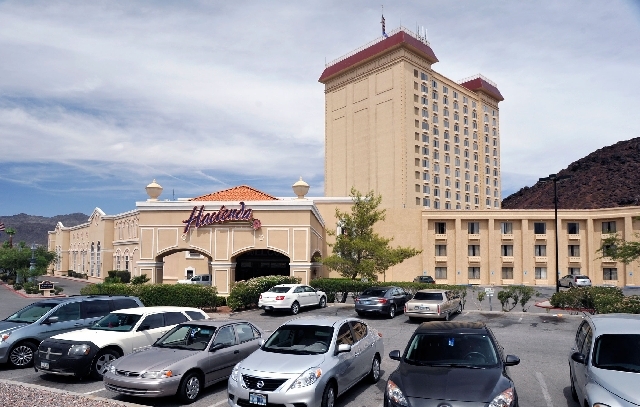 The Hacienda and 21 acres across the highway are being sold to tavern operator Dotty’s.

The announcement was made to Hacienda employees last Thursday. Lakeview Co., the current owner of the Hacienda, and Nevada Restaurant Services Inc., owner of Dotty’s, confirmed the pending sale Tuesday in a joint news release.

“I am thrilled to have this opportunity,” Dotty’s owner R. Craig Estey said. “The Hacienda is a historical jewel that attracts travelers and locals alike. Its proximity to Hoover Dam, along with boating on Lake Mead, and hiking the surrounding federal park lands, provide entertainment that we hope to include in our guest offerings.”

A sale price was not disclosed

Estey, through various holdings, has 58 Dotty’s taverns in Southern Nevada, 28 in Northern Nevada, and a slot machine route in 13 Food 4 Less grocery stores and 10 locations inside Kmarts. Estey also has machines at taverns in Montana.

The Hacienda, which is 3½ miles from Hoover Dam on U.S. Highway 93, would be Dotty’s largest casino and the first tied to a hotel when the deal closes, which is expected later this year.

Dotty’s is acquiring the operations of the Hacienda’s 19,000-square-foot casino; the 370-room, 17-story hotel tower; restaurants; meeting space; gift shop; and the Lakeview Cinemas space, as well as 21 acres on the south side of U.S. Highway 93.

The sports book has been operated by William Hill Race and Sports Book since June 2012.

The employees were told they would have to reapply for their positions, but the property would remain open during renovations, and construction of a convenience store across the street. The resort is a popular stopping area for tractor-trailers.

“It is our intention to keep the hotel and casino open while we modernize and renovate the building and grounds, including the development of a new gas station and convenience store,” Estey said. “Although it is a project that will take time, we have an extraordinary team at Dotty’s that is excited for the challenge.”

The three men had been involved with casino operations in Nevada that were sold to the Mandalay Resort Group, including the Railroad Pass hotel-casino. Those properties have since been merged into MGM Resorts International.

The owners first talked of selling the Hacienda in 2003, but no buyer materialized. The Bureau of Land Management tried to acquire the property in 2004, but the owners refused to sell over concerns about their employees’ jobs.

The former Gold Strike was renamed the Hacienda after a fire in June 1998 destroyed the casino, but not the hotel. The renamed property opened in November 1999.

The casino sits nearly 2½ miles south of Boulder City, which does not allow gaming within city limits. However, many of its nearly 275 employees live there.

The 32 combined acres are bordered by federal land, including Lake Mead National Recreation Area. The federal government has tried to acquire the property for seven decades.

The area is also where the proposed Interstate 11 loop will connect.

Dotty’s expansion into a hotel-casino comes after the company’s business model came under fire from rival tavern operators and the Nevada Resort Association in late 2010. Opponents said the operations were nothing more than a glorified slot machine parlor, offering snack food and minimal alcohol while focusing solely on gaming.

Estey created Dotty’s business model in Oregon and brought the concept to Nevada in 1995.

According to the Las Vegas Review-Journal, the company also was accused of skirting state law by offering mostly slot machine wagering without the usual trappings of a tavern.

Opponents argued the lack of a full kitchen allowed Dotty’s to avoid regulations governed by a voter-enacted smoking prohibition, which banned tobacco use where food is served.

Dotty’s officials said the business model addressed an audience that didn’t frequent the typical tavern. Dotty’s, they said, also took over tavern locations that had gone out of business.

In 2011, the Gaming Commission amended regulations governing taverns, requiring Dotty’s and similar small businesses with gaming to have a nine-seat bar, 2,000 square feet of public space and a kitchen operating at least half the time the business was open.

Clark County enacted changes in tavern laws to ensure that gaming was an incidental part of the business model, as opposed to being the key source of revenue.

Dotty’s sued Clark County in federal court over the changes, but a federal judge tossed out the lawsuit in 2012. Also, state lawmakers changed anti-smoking regulations to allow the activity in places where food is served.

Since the change in regulations Dotty’s has continued to expand its operations in the state by opening stand-alone facilities with other amenities.