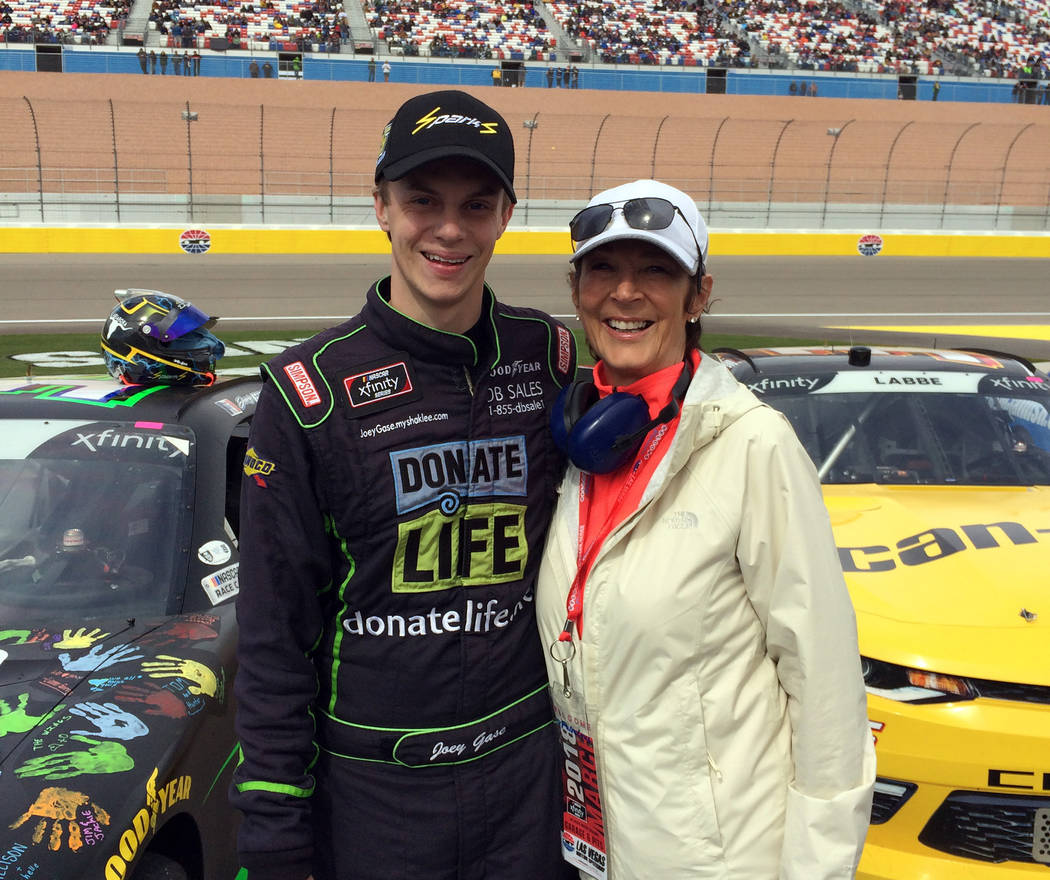 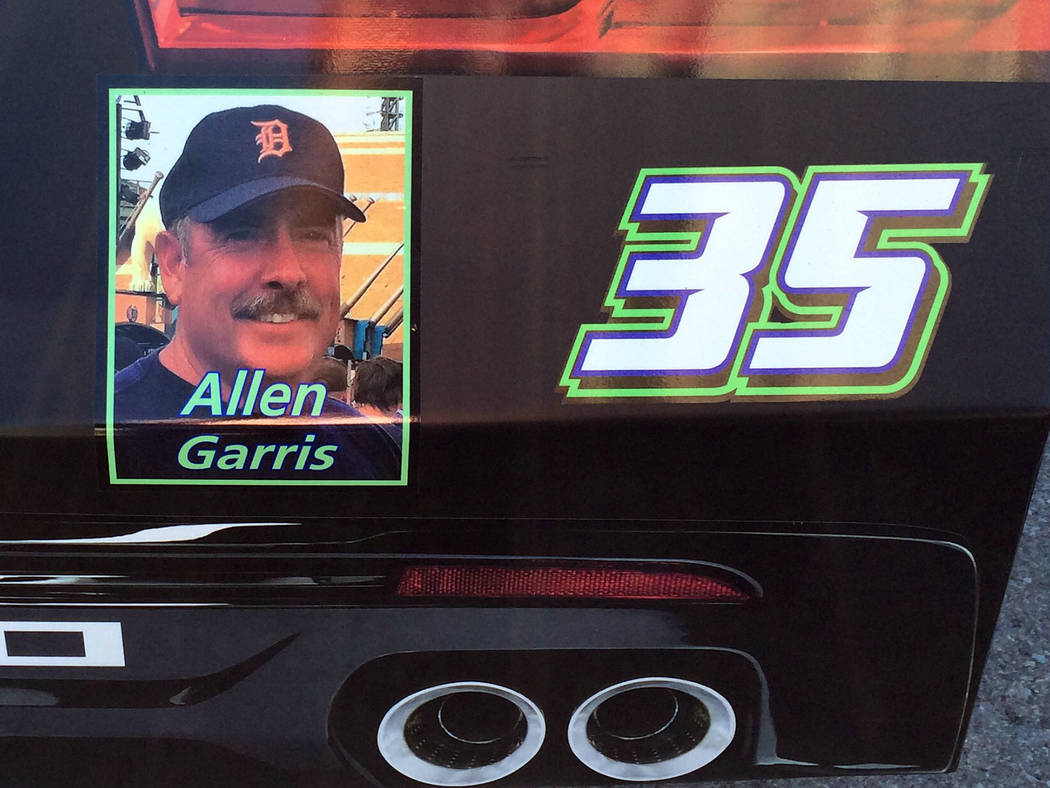 Barbara Garris NASCAR Xfinity Series driver Joey Gase honored the late Allen Garris on his car for Saturday's race at the Las Vegas Motor Speedway. Garris' tissues and organs were donated to 72 people after his death. 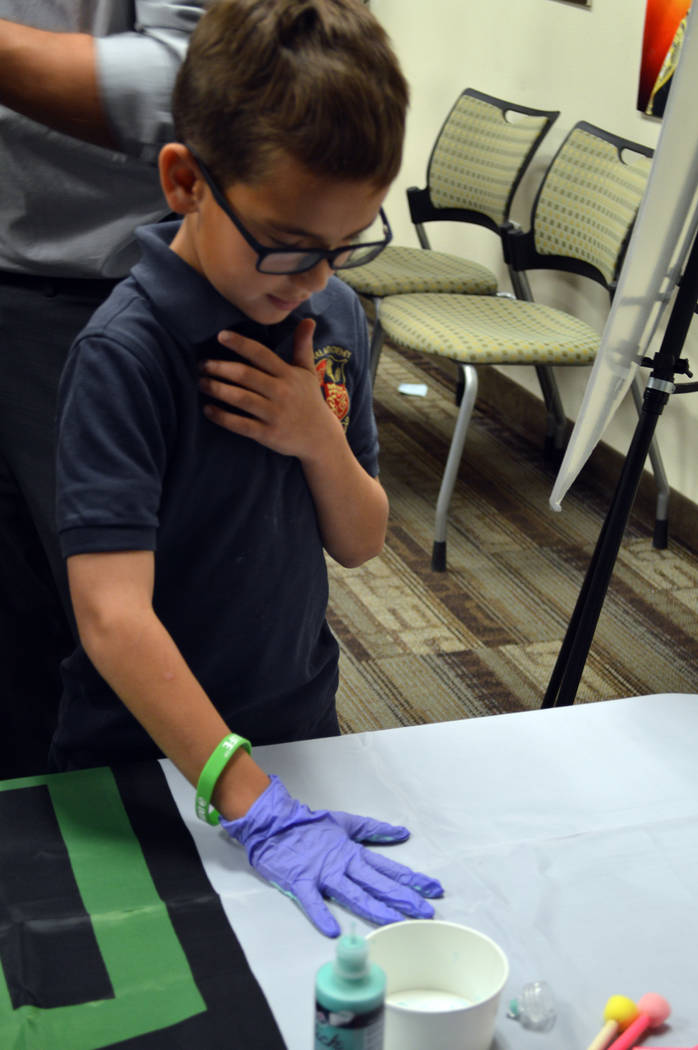 Celia Shortt Goodyear/Boulder City Review Gavin Garris puts a handprint on the organ donation flag in honor of his late grandfather Allen Garris. Garris' organs were donated after his death, and NASCAR Xfinity Series driver Joey Gase flew the flag at his pit for Saturday's race at the Las Vegas Motor Speedway. 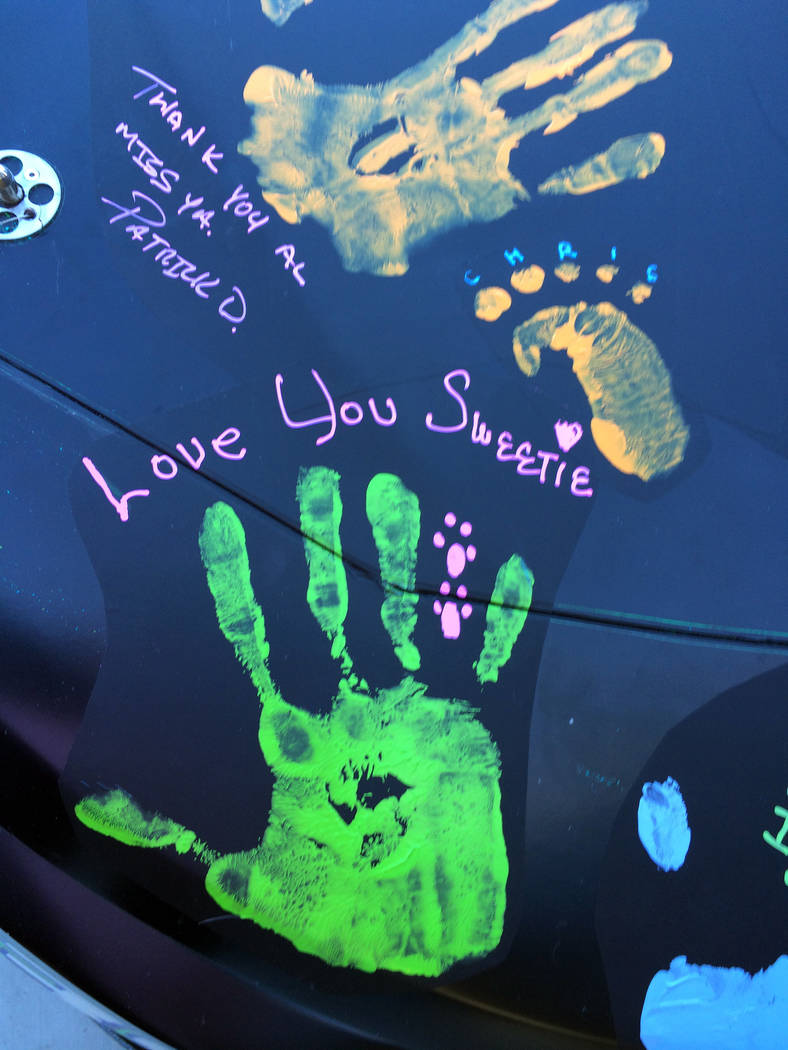 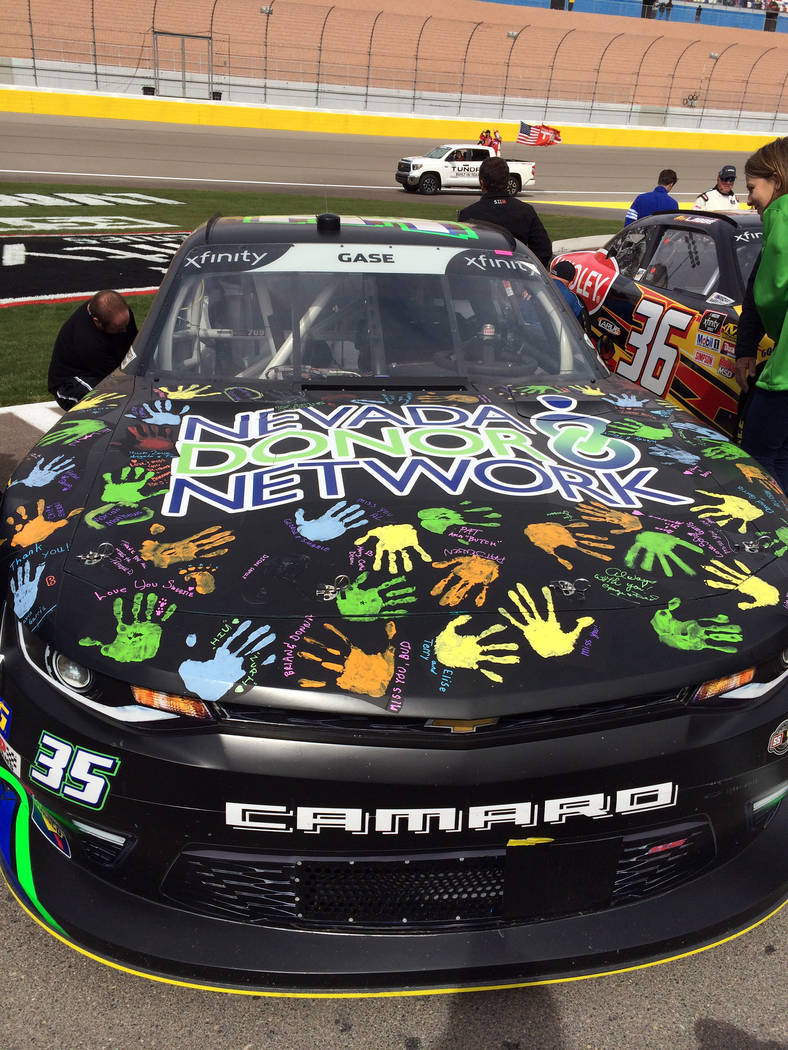 Barbara Garris NASCAR Xfinity Series driver Joey Gase covered his car for Saturday's race at the Las Vegas Motor Speedway with handprints from the friends and family of the late Allen Garris. 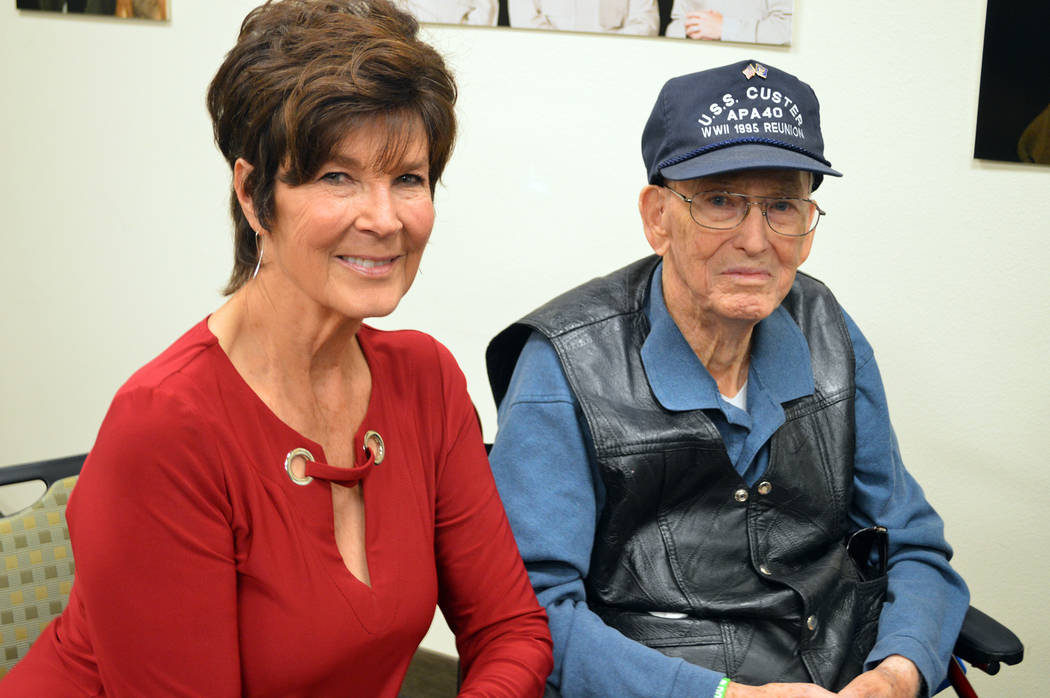 Celia Shortt Goodyear/Boulder City Review Barbara Garris and LeRoy Garris attend the Handprints of Hope Ceremony on March 1 at Metropolitan Police Department headquarters. It honored Barbara's late husband and LeRoy's son, Allen, who died in 2014 and whose organs and tissues were donated to 72 people.

A hero to many families, including his own, during his life, a Boulder City resident became a hero to 72 more through his death.

After a brain aneurysm claimed the life of Metropolitan Police Department officer Allen Garris on Nov. 16, 2014, his family chose to have his organs and tissue donated, which, to date, have helped 72 people, making him one of the largest single donors in Nevada history.

“Everything he did, he rose to glory, and that’s just Al,” said his widow, Barbara Garris.

“He was everybody’s hero,” said George Garris, his brother.

Barbara said that as far as she knows all the recipients are doing well, and their bodies have not rejected the donations.

“While not the single largest (donor), the gift is in the fact that he donated all he could to save and heal lives,” said Christina Hernandez of the Nevada Donor Network. “So far, Allen’s gifts of organs, tissues and corneas have healed more than 70 lives. Since donated gifts of tissue can be preserved for several years before transplanting, the number of lives saved and healed could continue to grow.”

Garris’ story was brought to the attention of NASCAR Xfinity Series driver Joey Gase, whose mom, Mary, died approximately seven years ago, also of a brain aneurysm, when he was 18 years old. Gase and his family chose to have her organs and tissue donated, which helped 66 people.

“Ever since then I want to honor organ donation and those it affects,” Gase said.

One way he honors them is by recognizing a local organ donor at each of his races and putting a photo of the donor on the bumper of his car. He also holds a Handprints of Hope Ceremony where people sign their names on vinyl handprints that are put on his car for the race.

With NASCAR at the Las Vegas Motor Speedway last week, Gase chose to honor Garris for his race Saturday, March 3, where he finished in 20th place.

“I can’t think of a better person to honor,” he said at the Handprints of Hope Ceremony on March 1 at Metro headquarters. “It’s pretty crazy to hear the similarities he had with my mom. … I want to honor Allen and his whole family because it’s not easy for any of them.”

Allen’s family and friends were at the handprint ceremony and were honored with the recognition for their loved one.

“It’s an honor to know how many people he helped,” said son Grant Garris.

“It’s nice to see my dad honored in this way. … It means even more that it’s at Metro,” said son Robert Garris. “We worked together (here) at the headquarters.”

Allen Garris spent more than 30 years as a police officer, starting in Ohio and moving to the Los Angeles Police Department in 1985 before joining Metro in 1992. While with the Las Vegas police, he was honored with the Meritorious Service Award in 1999 and 2006 and the Medal of Valor in 2003. His last position at Metro was senior robbery detective.

He and Barbara moved to Boulder City five years ago.

Barbara and other family members attended Saturday’s race and saw the car in action.

Barbara said deciding to donate a loved one’s organs is difficult because people want to keep their “loved one whole,” but it’s worth it knowing just one organ can save a life and affect an entire family.

Gase said he hopes his efforts not only recognize organ donors but also encourage people to talk about the subject and learn family members’ wishes about it.

“My mom was one, but we didn’t know,” he said. “We would have been able to make the decision sooner if we had known.”

Gase said he and his family only realized his mom was an organ donor when they found her driver’s license at home.