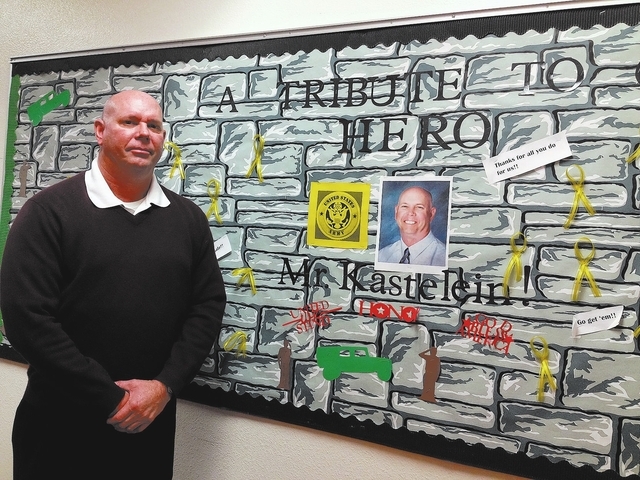 Just like the students at Garrett Junior High School, Vice Principal Ron Kastelein is looking forward to his two-week winter break. But unlike the students who will head back to campus when their vacations are over, Kastelein will be heading to Fort Dix in New Jersey.

Kastelein, a member of the U.S. Army Reserve, will spend 25 days training at Fort Dix before another short two-week break, additional training and an almost yearlong deployment to Afghanistan.

A battalion commander, Kastelein will lead a deployment and distribution support battalion of about 75 troops to retrieve assorted equipment that has been used in Afghanistan during the past 13 years.

“I’m not sure where in Afghanistan. It depends on what needs to be done,” he said. “That’s part of the adventure. It’s just like here. You think you know what you are going to do when you get here in the morning, but there may be a student or parent that you have to deal with. That’s one of the things I enjoy about my job. It’s never the same.”

This will be his fourth deployment with the Army Reserve and his second trip to Afghanistan.

Kastelein has been in the military, both active duty and reserves, for 32 years and plans to retire after marking his 35th anniversary.

“I never had anything go so bad that I wanted to get out,” he said, adding “My original intent was to only go in for three years. I was in my early 20s and I had the idea of a different career.”

A conversation with a Reserve Officers’ Training Corps commander changed the course of his career. After eight years as an enlisted soldier, he went to officers training school. Immediately after completing officers training, he was deployed as part of Operation Desert Storm during the Gulf War.

In September he was promoted to colonel, which he will receive when he returns.

“I had already met my goals in the military. The last promotion was just icing on the cake,” he said.

Kastelein said being in the military has afforded him with many opportunities, including travel and learning how to deal with people and unexpected situations.

“I’ve had great support from the school and Ms. (Jamey) Hood. It made this easy to do,” he said.

Kastelein also praised the Clark County School District for its proactive stance toward military service, filling out the proper paperwork and helping smooth the transition between his military and civilian careers.

He believes his military background sets him apart from other candidates for positions within the district.

He has been at Garrett for almost two years, having served as a dean at Basic High School for six months after returning from his previous deployment. He said has enjoyed working in Boulder City, learning all the roles of an assistant principal, and would be happy to return if he can.

“I had a lot of support from the community. It made my job as an assistant principal simple,” he said adding he is especially grateful for the support he received from parents.

Serving in the military is a family affair for Kastelein.

His father and brother served as Navy aviators, so there were a few friendly conflicts during the annual Army-Navy football games, he said with a smile.

When Kastelein returns to Nevada, he will remain with the school district, but he doesn’t know exactly what school he will be working at or in what capacity.