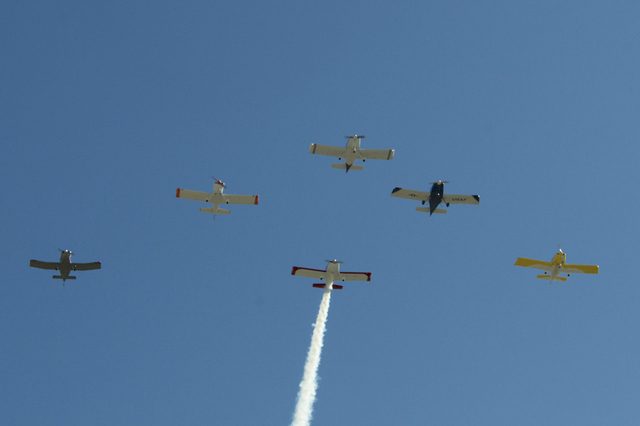 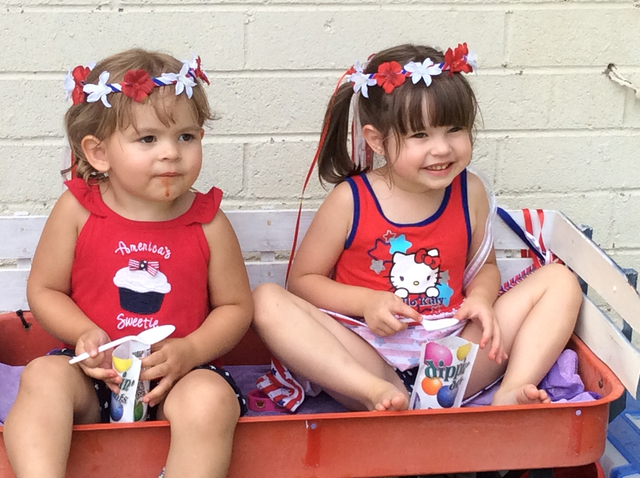 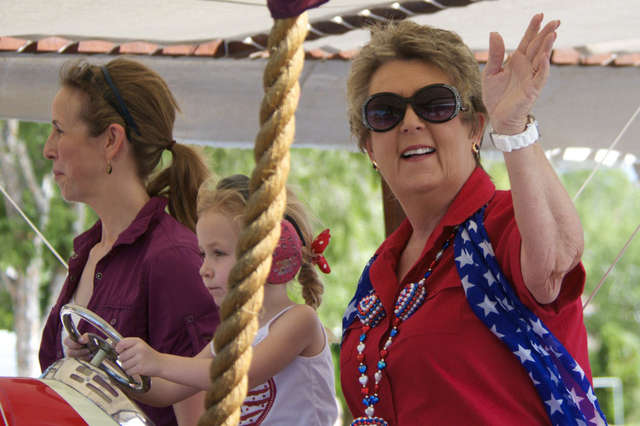 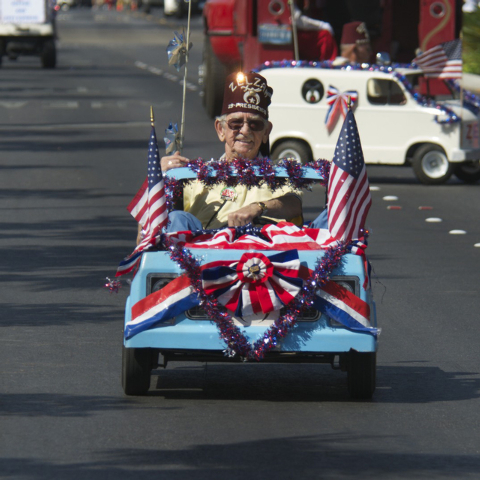 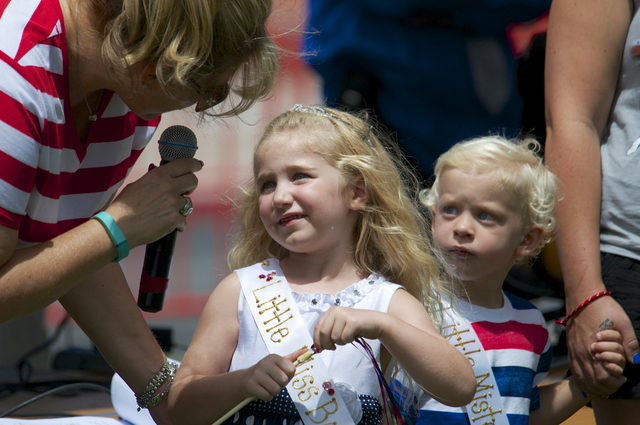 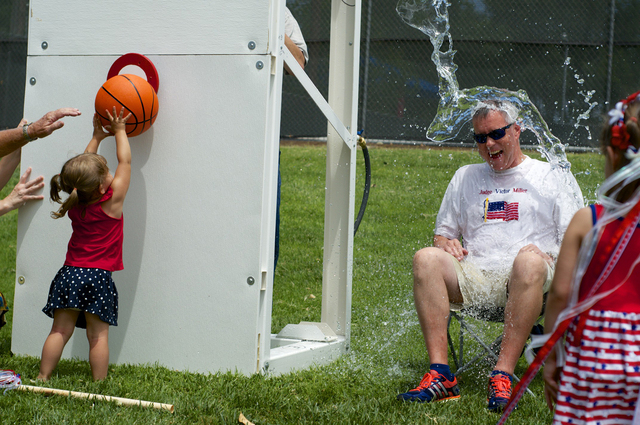 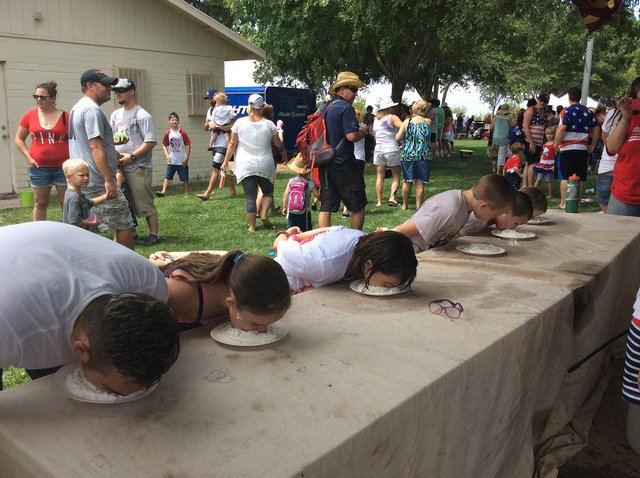 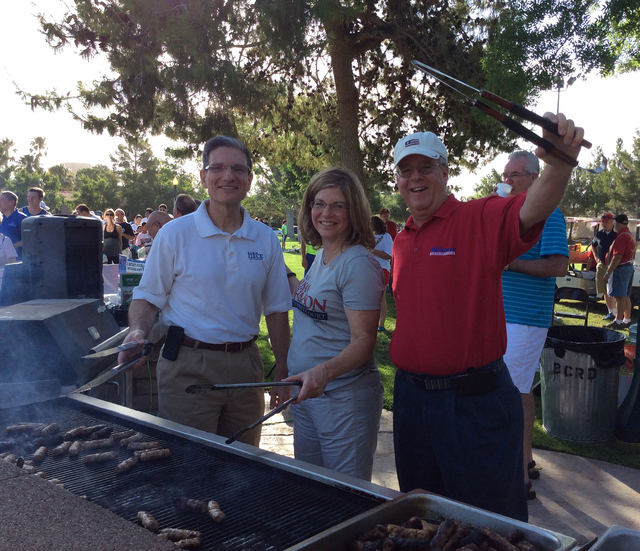 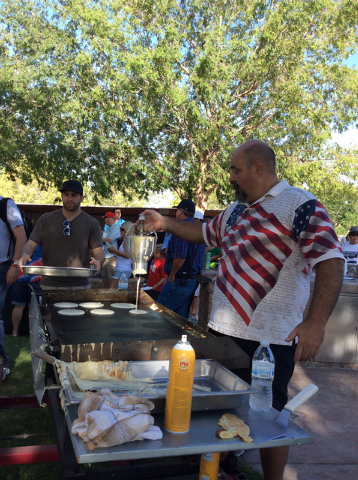 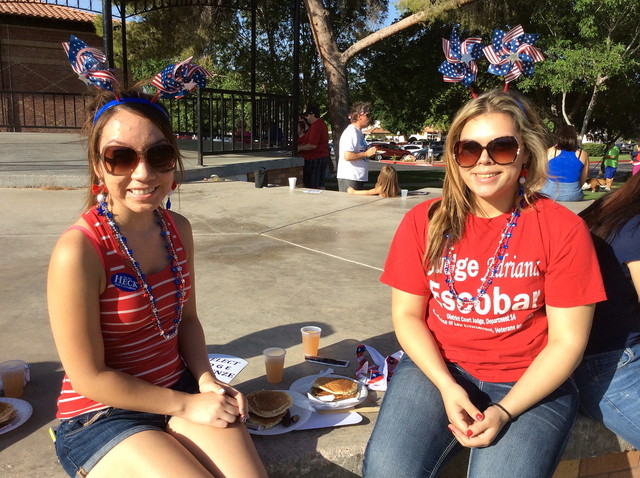 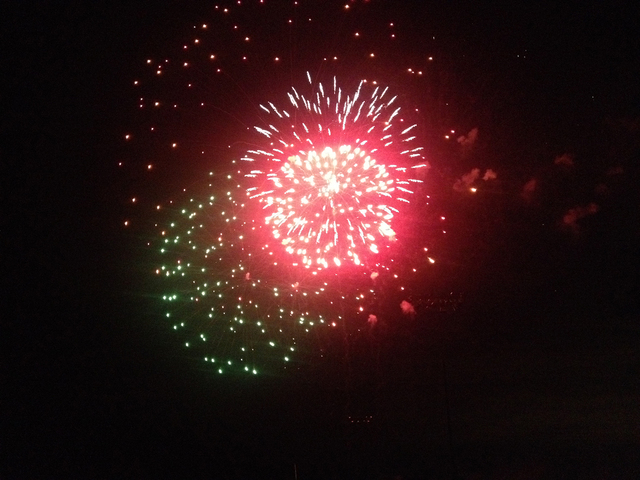 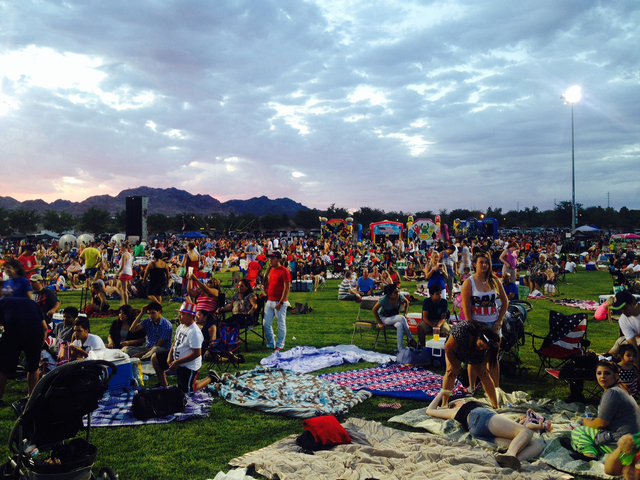 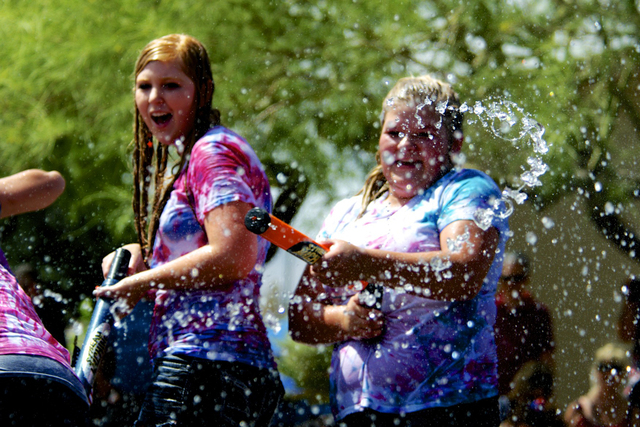 Pancakes, a parade, parties in the parks and pyrotechnics.

Dr. George Rosenbaum, event chairman, said the club usually serves around 600 people, who swing by Bicentennial Park before lining the parade route. The complimentary breakfast, served as a community service project by the club, included pancakes, sausage and juice or coffee.

Club members have been flipping the flapjacks in the park since the 1940s, Rosenbaum said.

At 9 a.m., the skies overhead began to rumble as the Boulder City Veterans Flying Group kicked off the parade with a flyover — actually a triple flyover as they made the trip down Nevada Way three times.

At the end of parade route, family and friends gathered in the park for an old-fashioned Fourth of July celebration. It was as if the hands of time had been turned back a hundred years as people enjoyed musical entertainment, food and the chance to visit.

Alumni from the classes of 2004, 1989 and 1984 Boulder City High School met in the park after participating in the parade.

Broadbent Park also was the site of sack races, pie eating contests, a tug of war and dunk booth.

The party didn’t stop at Broadbent Park, however, as thousands of people from all over the valley and beyond spilled over to Veterans’ Memorial Park for a nightcap of barbecue, relaxation and fireworks.

By 6 p.m., myriad cars littered the dirt parking lot, while hundreds more filed in on both sides of Veterans Memorial Drive. Once they finally made it into the park, visitors waited nearly 20 minutes for funnel cakes and other delicacies as the night wore on.

And as the bright sky began to fade away and the 7 p.m. sun began its descent to the peak of the mountains, the party carried on with music, dancing and other outdoor activities.

Footballs were tossed, hot dogs were grilled and, with the World Cup in full swing, the occasional soccer ball was kicked as nearly every patch of the park’s forest green grass was used.

Brooke Fritz and her family have been coming to Boulder City’s Damboree for the past four years, and, according to her, it’s not something you can get in the city. Her sister, Paige Brown, lives in San Clemente, Calif., but decided to come with the rest of her family to Boulder City to celebrate the Fourth of July.

Fritz donned a red, white and blue shirt, like most of the family she brought with her. They also brought blankets, folding chairs and a football as they enjoyed the summer sun at the park.

Las Vegas resident Jon Funderburk experienced the Damboree for the first time Friday night. Dressed in a black polo with an American flag draped across the front and a pair of shorts with stripes on his left leg and stars on his right, Funderburk got to Veteran’s Memorial Park about 3 p.m. It was packed when he got there, he said.

And as the sun turned from a bright yellow to a pale tint of orange at approximately 8 p.m., Meybol Segovia sat in her lawn chair surrounded by other families watching the sun go down.

A native of Lima, Peru, Segovia has lived in Henderson for the past 10 years. After experiencing her first Damboree two years, Segovia knew she’d be back.

“I was really impressed the first time I came here because everything was really authentic,” she said. “The fireworks are amazing. In my country we make amazing fireworks, but I’ve never seen nothing like here.”

In Peru, according to Segovia, the excess of drinking during their holiday celebrations takes the fun out of the experience. It’s one of the reasons she enjoys celebrating the Fourth of July in Boulder City.

“Here, the police are around, everything is really organized, and you guys don’t drink like crazy. I love that,” she said.

The throngs of people at the park suffered a minor scare when droplets of rain fell from the sky about 8:30 p.m., 30 minutes before the fireworks were scheduled to start. The rain came down with stronger force about five minutes later, but the gray skies began to clear out as night fell upon the city.

Not a single pair of eyes could be seen looking down as the fireworks began at 9 p.m., minutes after the final rain drops sprinkled the crisp, damp grass.

For 20 minutes, both the fireworks and the occasional bolt of lightning lit up the warm, night sky as Boulder City rang in the United States’ 238th birthday.

When asked if he would be back for next year’s Damboree, Funderburk was blunt with his words.

“Oh, hell yeah I’ll come back next year,” he said.