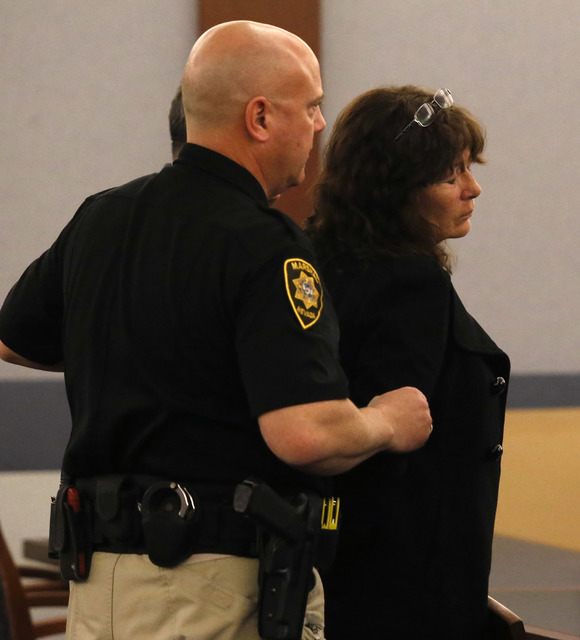 Christian K. Lee/Las Vegas Review-Journal Mary Jo Frazier, the former head of the Boulder City animal shelter, is placed in handcuffs after receiving her sentence Tuesday in Las Vegas. Frazier was sentenced to 90 days in jail for needlessly euthanizing her own dog. 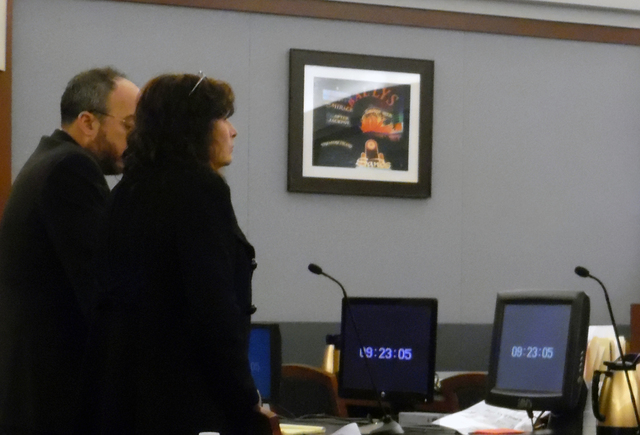 Hunter Terry/Boulder City Review Mary Jo Frazier, the former supervisor of the Boulder City Animal Control, was sentenced to 90 days in Clark County Detention Center and 16-40 months, which will be deferred while she is placed on four years of probation. Frazier pleaded guilty to one count of animal cruelty in October of last year.

Frazier was taken into custody immediately after the hearing.

Frazier was sentenced to 16 to 40 months, but the time was deferred pending her probation. Once she is released from the detention center, the terms of Frazier’s probation stipulate that she is not allowed to own or interact with any animals and she is prohibited from using alcohol or marijuana. She was also ordered to complete a substance abuse evaluation and an animal cruelty counseling class.

Though the city had originally sought to have Frazier charged with 37 counts of animal cruelty, after years of allegedly, needlessly euthanizing animals, only two counts were filed against her in September by the Clark County district attorney’s office. A month later she plead guilty to the single count stemming from illegally euthanizing her own dachshund, Oscar.

According to Chief Deputy District Attorney Amy Ferreira, Frazier took no responsibility for her behavior, showed no remorse and repeatedly defended her decision to euthanize the 8-year-old Oscar by explaining that the dog urinated in the house multiple times and ruined the furniture.

Frazier’s defense attorney, Adam Solinger, argued that Frazier loved Oscar but that she couldn’t take him with her when she moved out of state after her divorce and that she feared what would happen to him because of his behavior issue.

Solinger denied that the euthanization of Oscar had anything to do with revenge against Frazier’s ex-husband in the midst of their painful divorce and said that she was only concerned that a dog with such problems might be put down if returned to a shelter or abusively punished by future owners if adopted.

“Oftentimes when animals have behavioral issues, people respond poorly,” Solinger said. “So if you have a dog that is peeing everywhere, you don’t want an owner to be beating the dog, using negative reinforcement. So she had to make a difficult choice.”

In her own defense, Frazier said that most shelters would not try and readopt a dog with such behavioral problems.

“To put him in a cage for the entire rest of his life, in my eyes would be cruel,” Frazier said. “I never meant to inflict any pain or anguish on my little dog. My heart’s broken over all of this, it has been the worst year of my entire life.”

Because of the fact that she was in a position of trust, Judge Susan Johnson determined that the 90 days Frazier is to serve in the detention center would be flat time, meaning that she would serve the full time and not be eligible for early release because of good behavior or anything else. She was credited for one day already served.

Frazier began volunteering for the shelter in 1996 and remained until she was forced to resign in 2015.

Former Boulder City Police Chief Bill Conger had been notified of Frazier’s actions by Detective Dave Olson and animal control officer Ann Inabnitt, who has replaced Frazier as the supervisor.

Conger himself resigned in disgrace after it was discovered he directed Olson to stop the investigation into Frazier’s activities as well as cash and drugs that were missing from the shelter.

Instead, according to Olson, Conger decided to offer her a chance to “bow out.” Olson said that Conger had told him he knew about some the accusations beforehand and it was “going to look bad if it (got) out.”