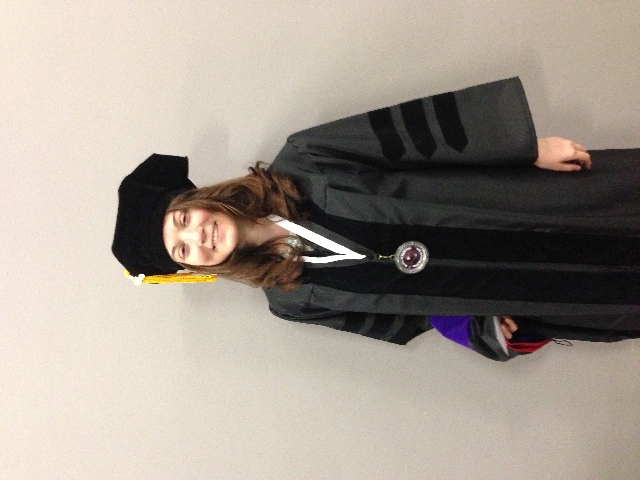 When the Boulder City Review’s founding editor Laura Ludwick left this newspaper to attend law school in 2010, she was confident that her journalism experience would help her with her new career. And it has.

Ludwick, now using her maiden name Laura Tucker, graduated May 19 from the Boyd School of Law at University of Nevada, Las Vegas, and is voraciously studying for the state bar exam later this summer.

“I’m happy to be done with law school but I still have the bar exam so it’s not even a tenth of the way done now,” said Tucker, who was editor of the Boulder City Review from November 2009 to July 2010. “If you don’t pass the bar exam you’re not an attorney.”

Tucker has been getting plenty of real-world experience since November 2011 by working as a legal clerk with Las Vegas and Miami-based firm Randazza Legal Group, which specializes in First Amendment, intellectual property and Internet law.

“I have a lot cooler job than most of my classmates do,” she said. “Almost every case we get is interesting.”

Tucker said she initially applied to a job posting seeking someone to write about First Amendment issues on the firm’s blog.

However, she said, “When they found out I was here (in Las Vegas) and I was someone who had journalism experience they decided to hire me as a law clerk instead.”

Tucker’s journalism experience not only helped her land a job, she said, but it has helped her with her work, which is primarily the research and drafting of motions.

“(Journalism) definitely helped me as far as legal writing,” she said. “Even though you may not be able to tell by reading court opinions, one of the goals is to be concise and get to the point quickly.

“I’m used to getting an assignment and turning it around on a short deadline and doing a good job. It’s the same with legal work.”

According to Randazza Legal Group managing partner Marc Randazza, Tucker has been “a great asset to the firm.” Randazza even plans to hire her once she passes the bar, Tucker said.

Leaving journalism was a difficult decision, said Tucker, who also worked as editor-in-chief at UNLV’s Rebel Yell newspaper while earning her undergraduate degree, and as a reporter and copy editor at View Neighborhood Newspapers.

Tucker also said she misses the thrill of breaking news.

“I definitely miss the thrill of, ‘There’s a car on fire in the desert and the police are going out to investigate it,’ and you get the thrill of driving out and finding out what the fire is,” she said.

Now, Tucker said most of her work is done from behind a computer, and there is only the occasional thrill of having to quickly respond to a court briefing.

But by working in the legal field, something Tucker had considered since high school, she is getting a new sense of fulfillment.

“I wanted to do something where I felt like I could make a difference, even more than in journalism … where I wasn’t just writing about it but I could be one of the people facilitating it,” she said. “And so far I feel like I’ve already helped make a difference for our clients.”

Tucker doesn’t rule out the idea of ever returning to journalism, and plans to keep her chops up by writing for a legal publication or freelancing about legal issues.

“Defamation, free speech … it’s a fundamental thing and I think every journalist dreams of being the next Bob Woodward or Carl Bernstein, and it’s almost like I’m achieving that but doing it from the attorney, legal standpoint instead of doing it from the journalism standpoint,” she said. “I’m part of the law firm that’s defending the Bob Woodwards and Carl Bernsteins so they can do what they need to do.”