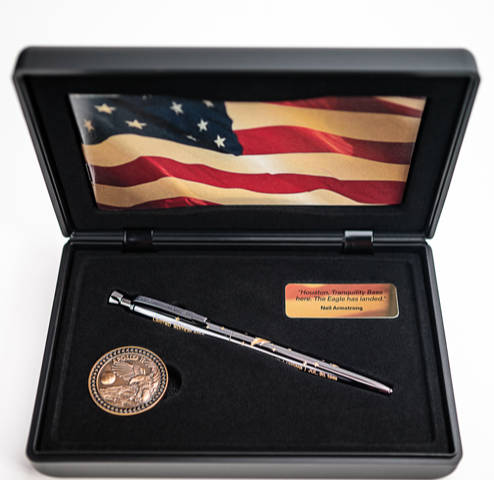 A longtime Boulder City business and community partner recently received a federal grant to help sell its products to more countries throughout the world.

Fisher Space Pen, 711 Yucca St., was awarded $5,000 from the Nevada Governor’s Office of Economic Development, part of Gov. Steve Sisolak’s plan to help small businesses in Nevada thrive by providing them with tools and information needed to succeed in export-related expansion.

Matt Fisher, vice president of sales, said the grant money will be used to visit prospective distributors in new countries.

“This will help us better understand the market and their business platform,” he said. “We will also use it to gain a better understanding … while offering sound advice on selling our products. We currently have distributors in 52 countries around the globe.”

The money was provided through the Small Business Administration’s competitive State Trade Expansion Program, which has $125,000 in federal funding to give to small businesses.

Fisher said the company applied for the grant and is thankful to receive it.

Fisher Space Pen has been in Boulder City since 1976. Its pens write in the harshest of conditions including zero gravity, over grease, at any angle and underwater. In 1968, one of its pens was used on the Apollo 7 mission, and since then a space pen has flown on every manned space flight.

To recognize the coming 50th anniversary of NASA’s Apollo 11 July 1969 spaceflight, during which astronauts Neil Armstrong and lunar module pilot Buzz Aldrin landed on the moon, the company released a commemorative pen and coin set. That set and a Fisher Space Pen display were unveiled at the Kennedy Space Center’s Saturn V Center in Florida earlier this year.

“A lot of work has been put into it over the past two years, so we are very happy and grateful to see it finally come to fruition,” Fisher said.