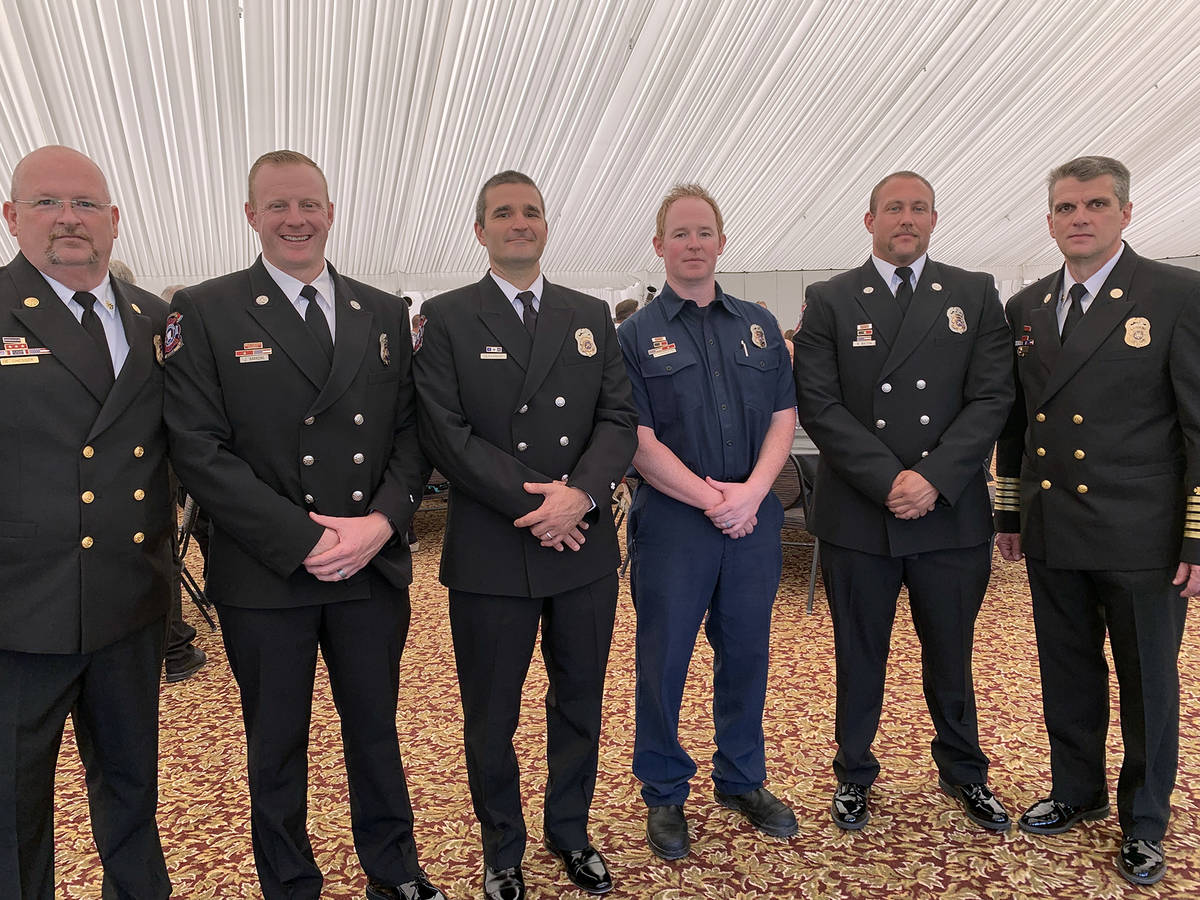 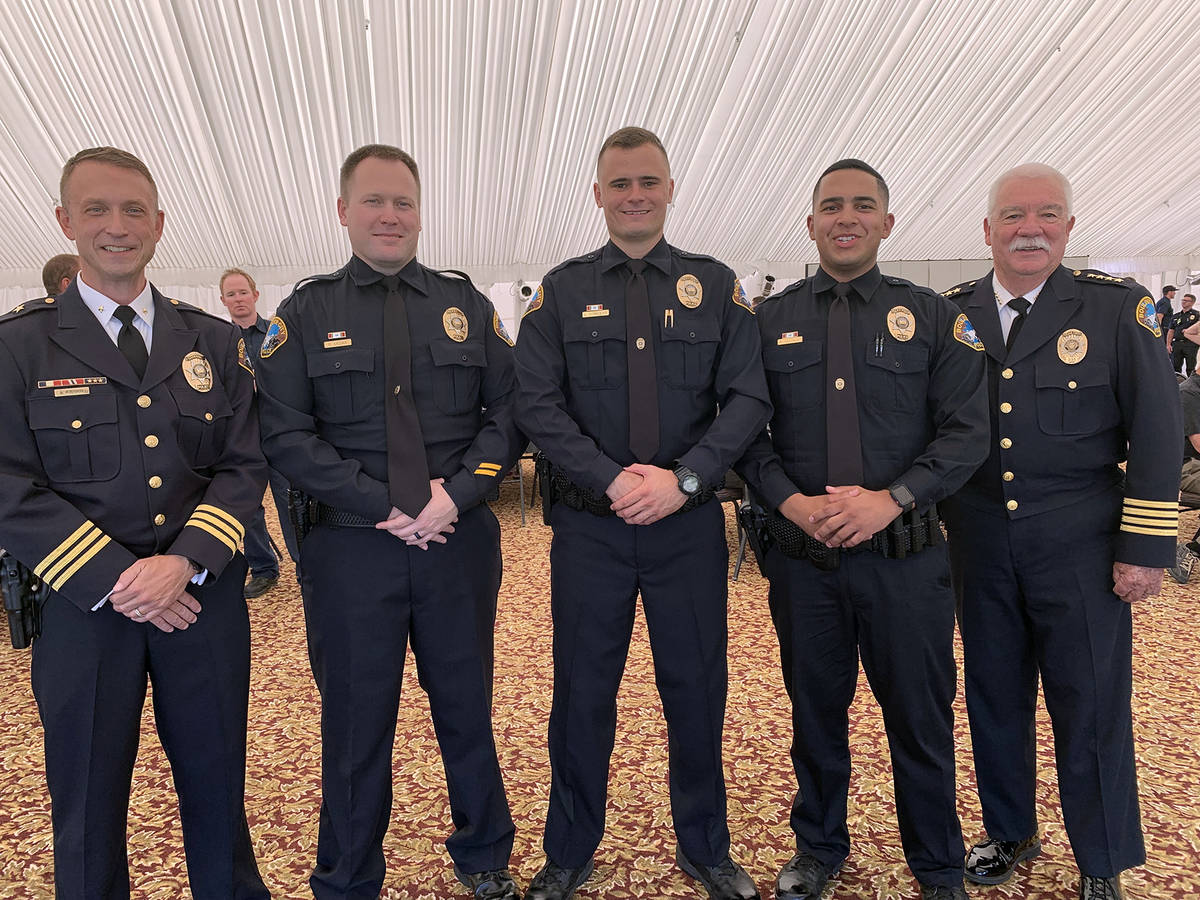 (Hali Bernstein Saylor/Boulder City Review) Boulder City Police officers Guy Liedkie, second from left, Giovanni Torcaso, center, and Kenny Calzada, second from right, were presented with a Meritorious Service Award on Friday, June 25, for their work that resulted in the felony arrests of more than a dozen people and seizure of illegal drugs and weapons. They were congratulated by Cmdr. Aaron Johnson, left, and Chief Tim Shea. 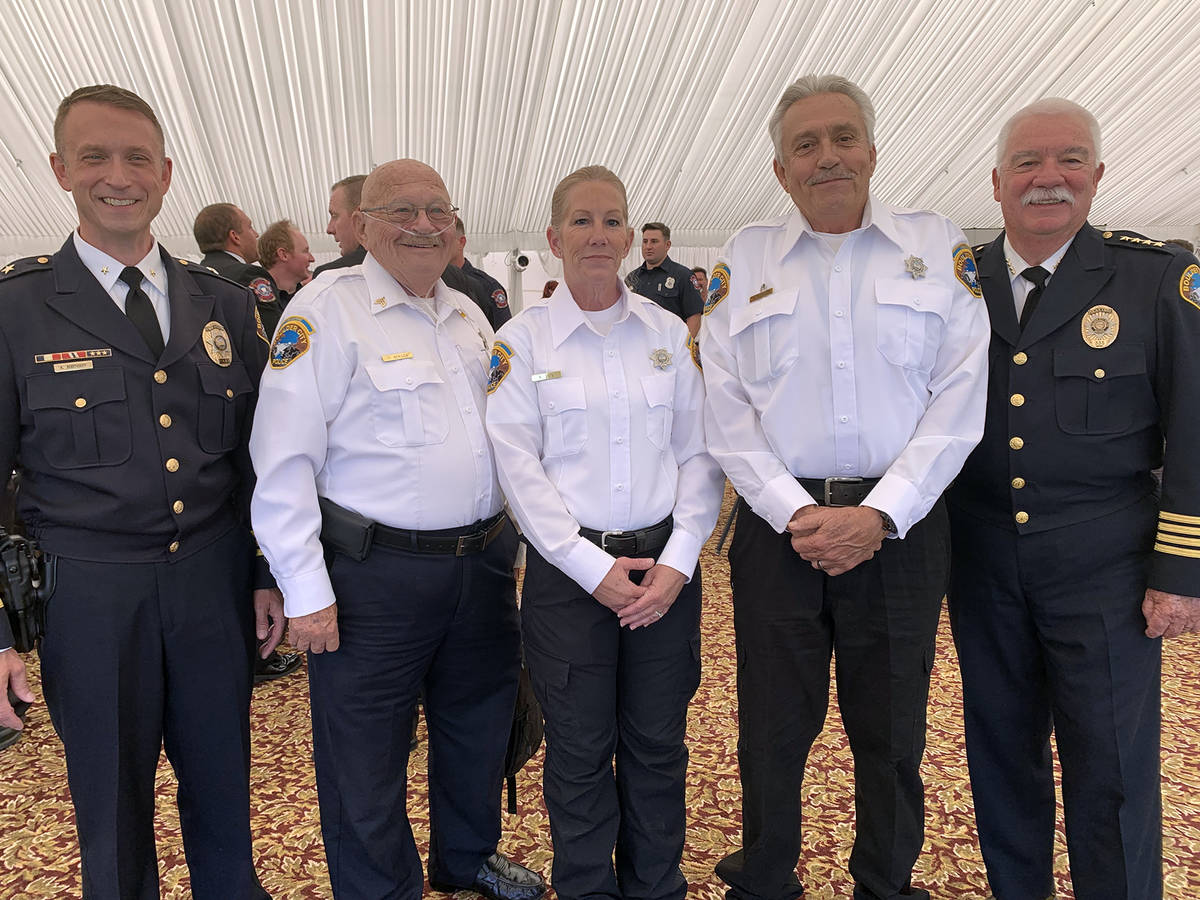 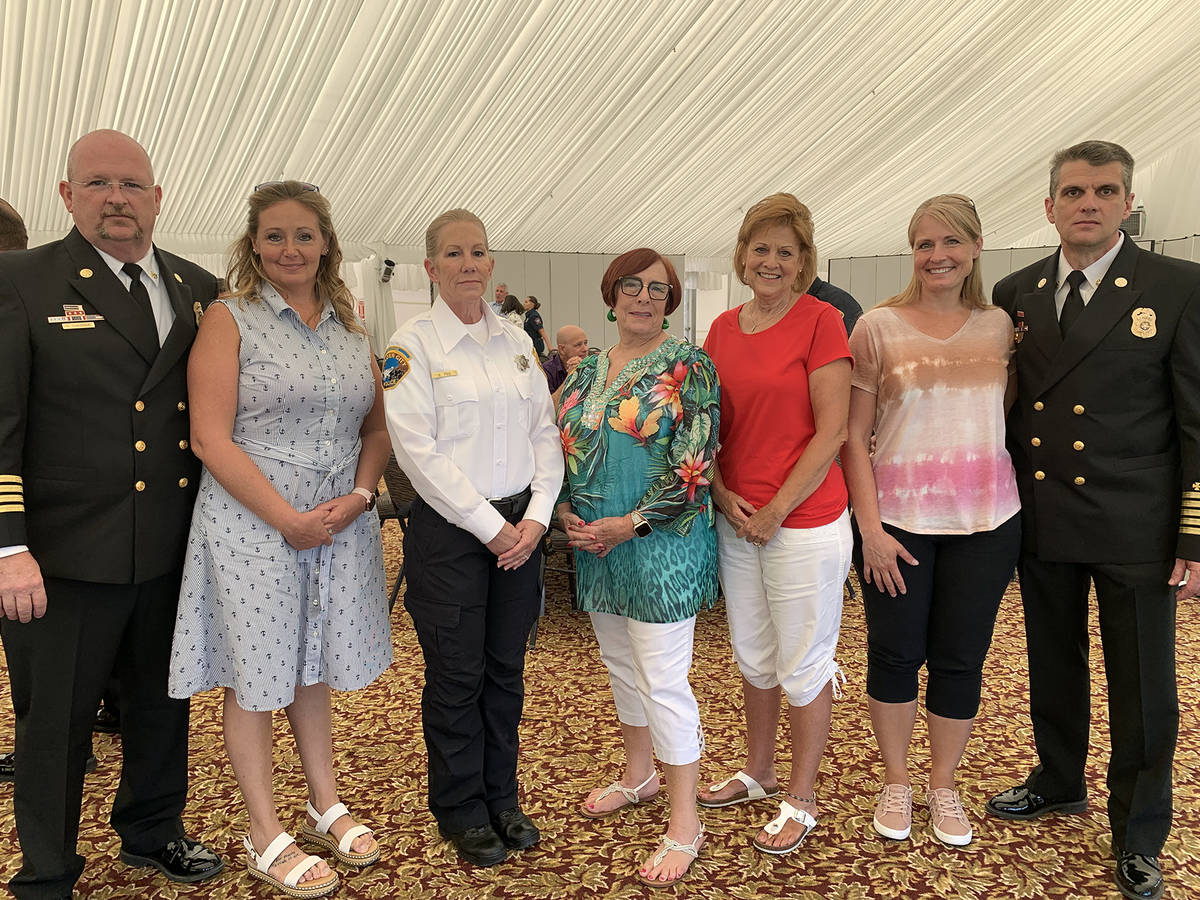 Deputy Fire Chief Greg Chesser, who served as co-emcee along with Police Cmdr. Aaron Johnson, said fire and police personnel and volunteers rose to the challenge to help the community, especially as it dealt with the effects of COVID-19.

“To say it was a good year during a global pandemic would probably raise an eyebrow or two; however, in terms of outstanding service to our beautiful city, it was a great year,” Chesser said.

Firefighters/paramedics Nigel Walton and James Whitworth were jointly named the Firefighter of the Year recognizing their accomplishments, devotion to the job, service to the public and positive reflection on the department. The two also received the Fire Chief’s Award for their efforts to overhaul the city’s fire cadet academy program and assistance in developing a training program for staff.

Firefighter and paramedic Jason Dardano was presented with the Lifesaving Award for his work in November when he arrived on scene and found a person unresponsive and in respiratory arrest. Through swift action, he was able to save the person’s life.

A Medal of Merit was presented to firefighter/paramedic Josh Barrone for his work as the city’s COVID-19 vaccine coordinator. The program saw more than 6,500 residents vaccinated against the coronavirus and Barrone was responsible for ensuring there were staff and volunteers on site to administer the vaccine along with coordinating efforts with Boulder City Hospital, Boulder City Parks and Recreation Department and the Southern Nevada Health District.

A Medal of Merit was presented to Fire Chief Will Gray for “flawlessly leading the city” through the COVID-19 pandemic, which hit shortly after he was hired. Since March, he has headed the Emergency Operations Center and has overseen the administration of more than 7,000 tests and 6,500 vaccines for COVID-19.

Paramedic/firefighter Harold Hadley, who was unable to attend, was awarded a Medal of Merit for his work as the city’s COVID-19 testing program coordinator. He ensured that there were qualified personnel to administer the tests and worked with state officials to help establish a federal testing lab for rapid testing.

Chesser was given a special commendation award for spearheading the transition and training for a new records management system, leading the department’s training program, implementation of the risk prevention program, and overhaul of the incident response process that ensured quicker department response times to emergencies.

Fire department volunteers were presented with civilian Awards of Merit for their service, recognizing the number of hours served working with the city’s COVID-19 testing and vaccination programs. Those honored were Dee Zambetti, more than 55 hours; Shannon Gray, more than 60 hours; Kelly Fox, more than 100 hours; and Shellie Chesser, more than 140 hours.

Volunteers Alan Goya and Mary Ellen Britt, who were unable to attend, volunteered more than 90 and 185 hours, respectively.

Gray said the volunteers were invaluable to the department this past year because there was not enough staff to provide the extra work necessary as a result of the pandemic.

The police department’s Meritorious Service Award was shared by Kenny Calzada, Guy Liedkie and Giovanni Torcaso, who were part of a year-long investigation that resulted in the felony arrests of more than a dozen people and the seizure of illegal drugs and stolen weapons.

Fox was named the department’s volunteer of the year. She serves as a squad leader, trains new volunteers and is the “go-to” person whenever assistance is needed.

Gary Berger was given a special commendation for serving as the “face” of the department’s volunteer program as well as training and mentoring fellow volunteers. He volunteers more than 100 hours a month to the department.

Also honored was volunteer Lonnie Munson, who was given a letter of commendation for his work as a squad leader and training new volunteers.

Police Chief Tim Shea said the awards and recognition were “long overdue.” He said police officers and firefighters don’t “wave flags” to highlight their accomplishments; they just do what is needed to serve the city and its residents.

“I am so happy to see both departments doing this,” said Mayor Kiernan McManus. “To say this has been a hard year doesn’t cover it.”

McManus said he is especially grateful to the efforts of those who worked on testing for the coronavirus and administering vaccines against COVID-19.

“Thank you all for keeping us safe in this pandemic,” he said.

Food for the luncheon was donated by Friends of the Boulder City Police Department and Fox Smokehouse BBQ.

Chesser and Johnson said they anticipate the awards ceremony will become an annual event.

The luncheon also served as an opportunity for a formal badge-pinning ceremony for firefighters who joined the department during the past year.