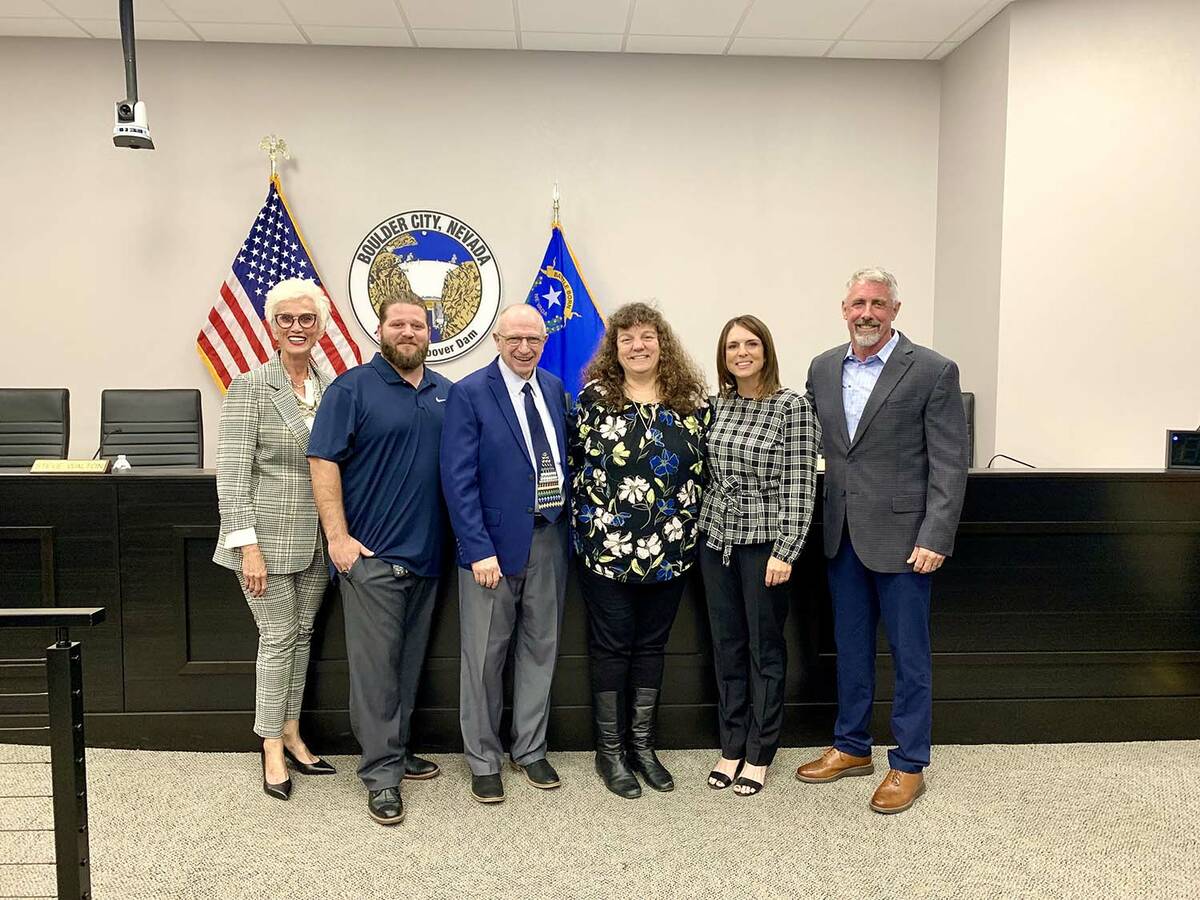 (Anisa Buttar/Boulder City Review) Barbara Agostini, fourth from the left, was presented with the 23rd annual Bill Andrews Award by City Council members, from left, Cokie Booth, Matt Fox, Mayor Joe Hardy, Sherri Jorgensen and Steve Walton, during their meeting Tuesday, Dec. 13, 2022. Agostini was recognized for her many contributions to the community.

“To move forward with the project requires an amendment to the city’s master plan as well as the zoning for this two-acre parcel,” he said.

In July, the city approved using funds from the American Rescue Plan Act to pay for the project.

Fire Chief Will Gray spoke about the response time study he conducted, which led to choosing the location.

“Response time is established for cardiac arrest survival and flashover in a fire,” he said. “As the doctor will be able to tell you, in cardiac arrest you have about four to six, six to eight minutes from when the heart stops to get it started again or you’re going to have permanent brain death.”

For flashovers, Gray explained that house fires become “almost untenable” after six to 10 minutes. “We are trying to get there fast so we can make an intervention,” he said.

Gray said selection of the Quartzite site was intentional because it was the one location where firefighters could serve the most people and the most vulnerable demographic of seniors.

Two residents from the area voiced their opposition to the substation citing loud noise and their property values decreasing.

“You’re talking about property value over saving someone’s life,” she said. “This is so unempathetic of people; they are blessed to have the firefighters in their neighborhood.”

Councilman Steve Walton cited his 25 years of experience working in fire stations predominantly located in residential areas. “It’s very rare when a fire station isn’t near the population they protect,” he said.

Walton described his experiences as a caregiver and educator at the fire station. “There’s a certain amount of community health that happens in fire stations, ” he said.

Addressing concerns of loud sirens, Walton said, “Hearing loss is a real and long-term affect for firefighters so we try to keep the sirens off as much as we can.”

Councilwoman Cokie Booth, who had opposed the fire substation in the past, voiced her support.

“I’m president of the homeowner’s association at Tuscany Retreat and we have sent out emails to everyone about the station coming in,” she said. “I am compelled to approve this as I don’t see anyone here and they haven’t written or called.”

At Garrett Junior High School, 60 percent of students are in accelerated classes compared to 20 percent last year. Advanced algebra and geometry classes are moving on campus so students will no longer need to travel to the high school for those advanced classes, she said.

“At Boulder City High School, 64 percent of sophomores who took the PSAT have been identified as having potential in advanced placement courses,” Jaskolski said. “(Principal) Mrs. (Amy) Wagner and her administrative team have worked with students and families who may not have thought they had the wherewithal to participate in AP courses, but with this data we want to really work with the individual student and provide rigorous coursework.”

At the start of the meeting, council members awarded Barbara Agostini with the Bill Andrews Award, which was established 23 years ago to recognize individuals who make a difference in the community.

“Barbara has been a pillar of the community for a long time,” Mayor Joe Hardy said. “I’d call her a mobile pillar because she moves wherever it’s needed.”

Council members commented on how Agostini strongly supports high school sports and volunteers her time and talents to the community.

“I think you’re one of the people that makes Boulder City this amazing place we all love to live in,” Booth said. “Thank you for what you do for the community and the kids.”

Agostini is the registrar and counseling secretary at Boulder City High School. She organizes and maintains the Eagles Closet, which provides clothing, supplies and gift cards to students in need.

Additionally, she is involved with most of the major events in the community, including parades, the Damboree, National Night Out, Spring Jam and Würst Festival.