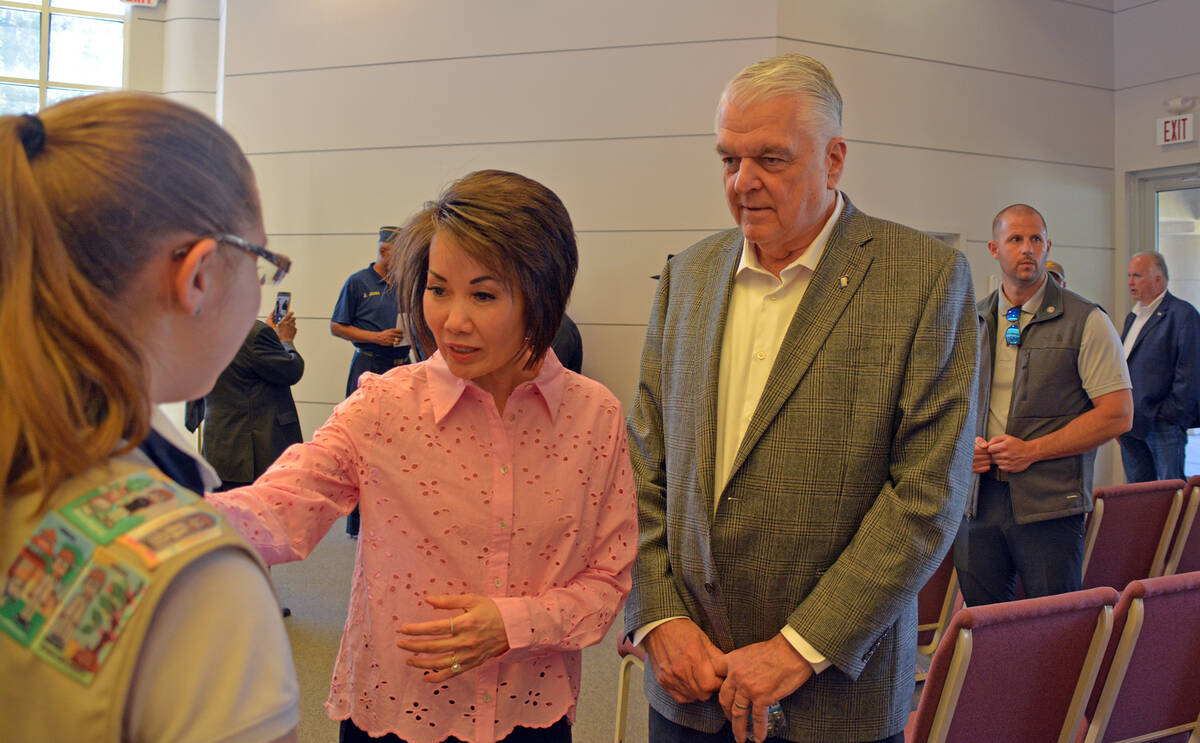 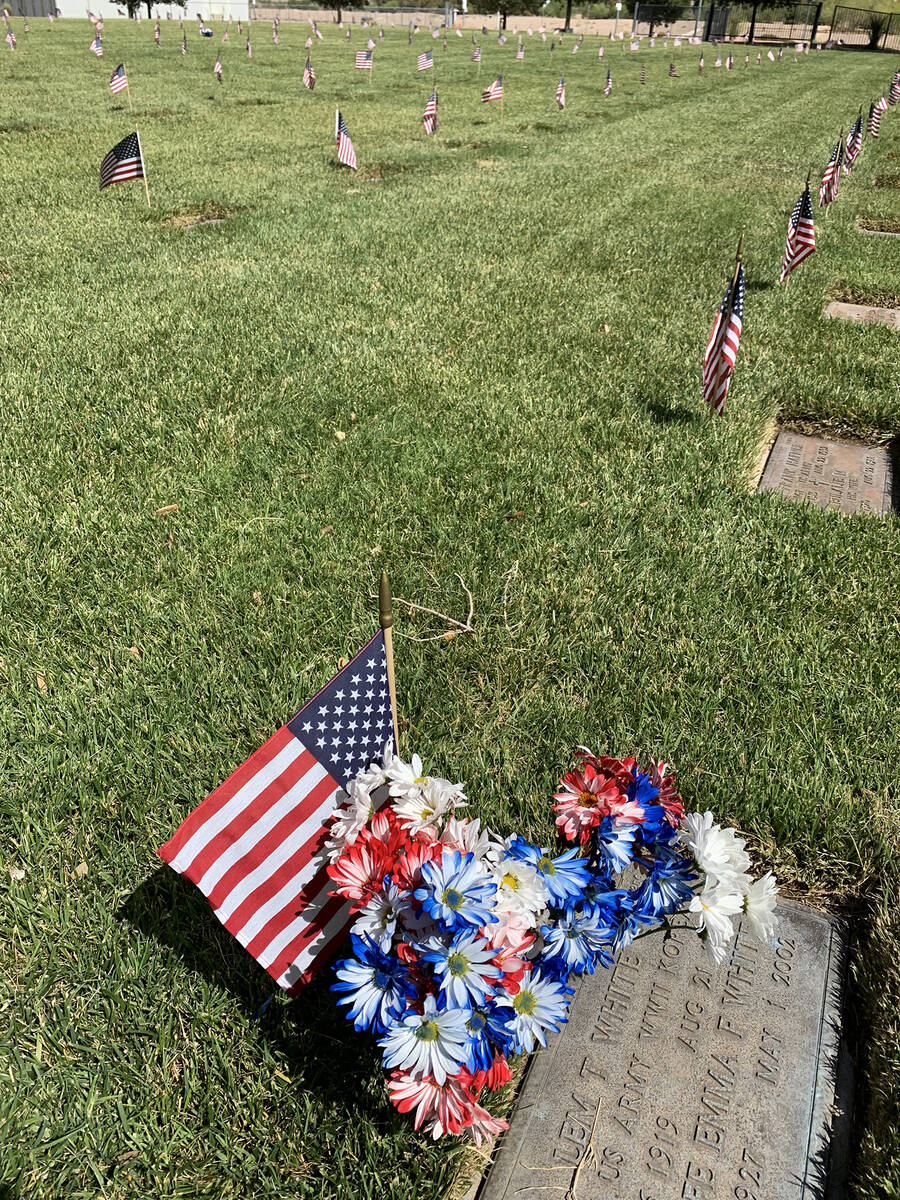 (Hali Bernstein Saylor/Boulder City Review) Flags, as seen on Sunday, May 29, 2022, were placed at every gravesite at the Southern Nevada Veterans Memorial Cemetery in Boulder City in observance of Memorial Day. 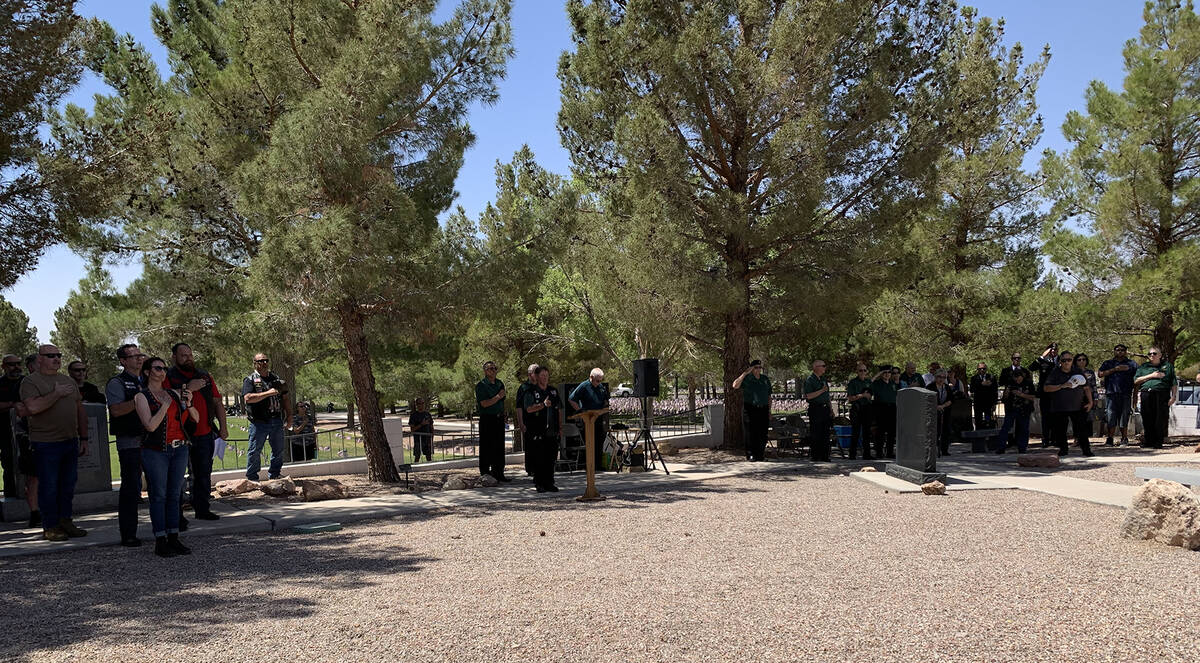 (Hali Bernstein Saylor/Boulder City Review) Motorcyclists and members of the Las Vegas Chapter 51, Special Forces Association, gathered Sunday, May 29, at the Southern Nevada Veterans Memorial Cemetery to pay tribute to those who gave their lives in service to the country. 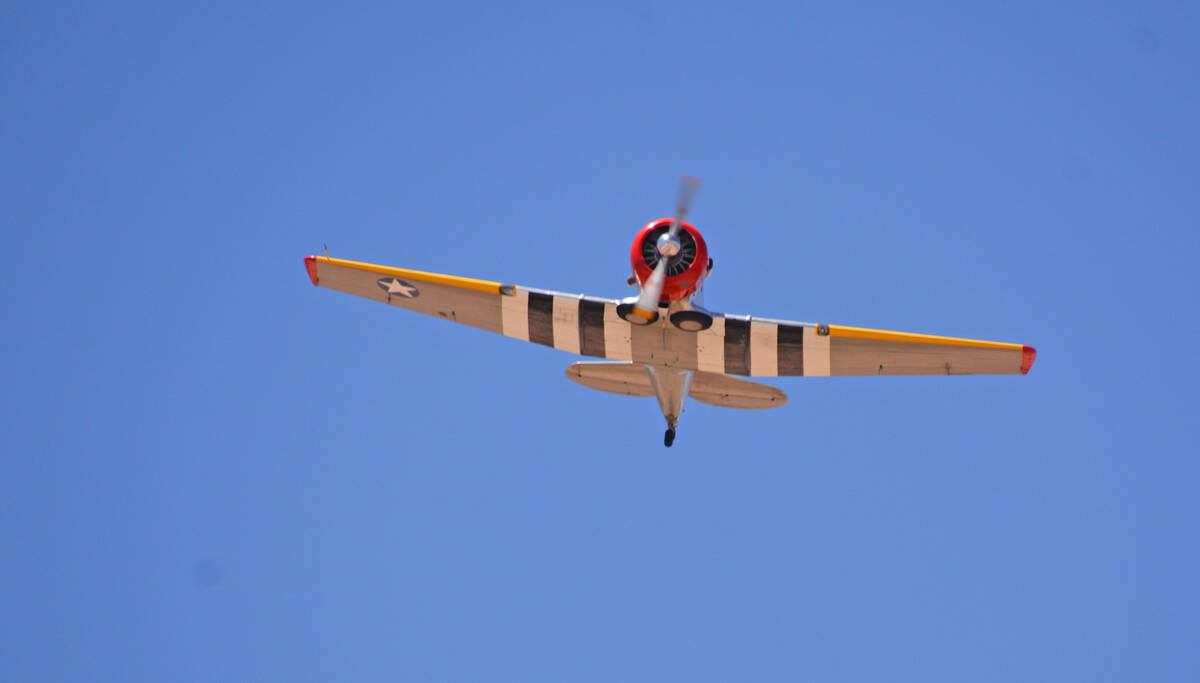 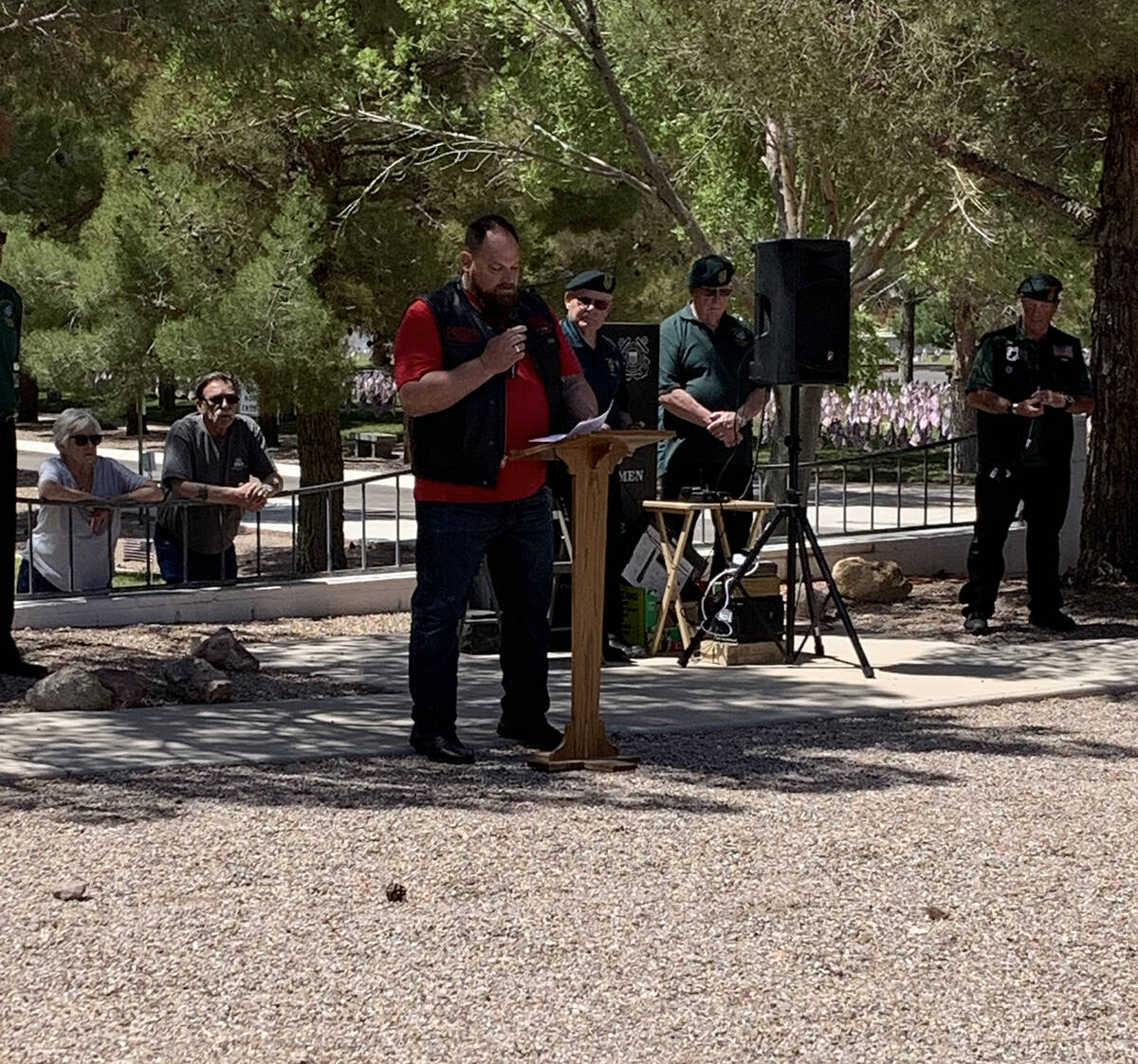 (Hali Bernstein Saylor/Boulder City Review) Arrow, president of the Vietnam Vets Legacy Vets Motorcycle Club, speaks during a Memorial Day ceremony Sunday, May 29, after the Fly Your Flags Over Hoover Dam Run. The motorcycle club has been holding the run for 28 years to honor the nation’s fallen soldiers. 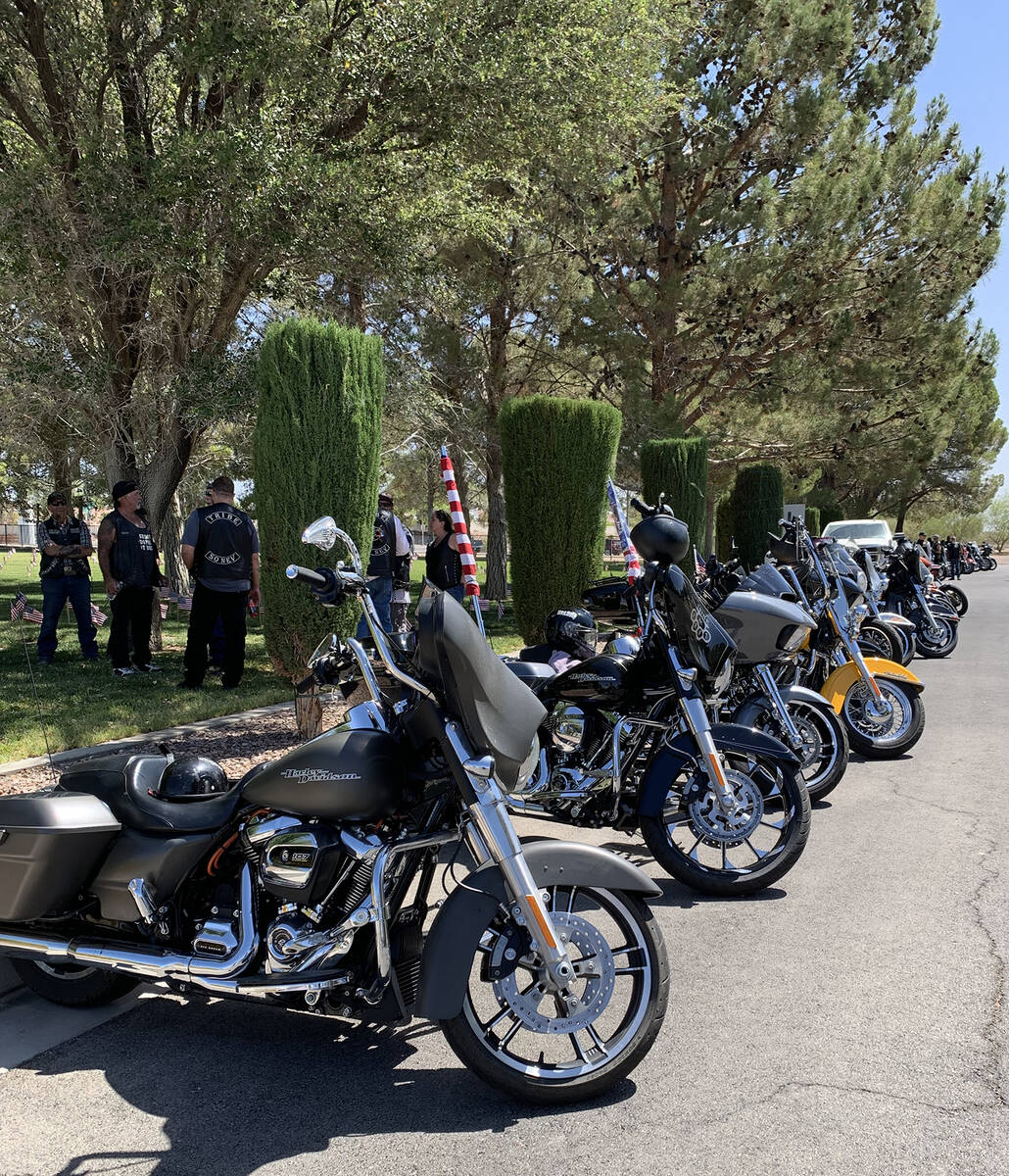 (Hali Bernstein Saylor/Boulder City Review) Hundreds of motorcyclists participated in the 28th Fly Your Flags Over Hoover Dam Run on Sunday, May 29. The ride ended at the Southern Nevada Veterans Memorial Cemetery in Boulder City, where a short Memorial Day ceremony was conducted. 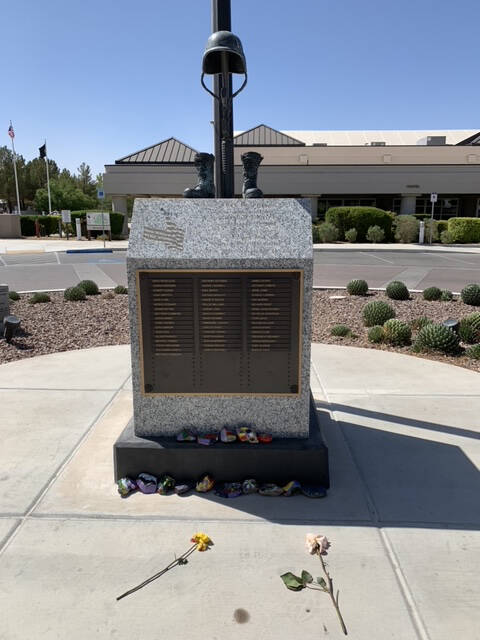 A hallowed spirit filled Boulder City this past weekend as visitors and residents gathered to remember those who gave their lives serving the country.

“The passage of time will never dull, nor diminish the service, courage and bravery of Nevadans who put on a military uniform and give everything to our country,” said Gov. Steve Sisolak during the Memorial Day ceremony Monday, May 30, at the Southern Nevada Veterans Memorial Cemetery in Boulder City. “May we remember our fallen heroes with pride as we reflect upon their legacy and sacrifice.”

Sisolak was the keynote speaker at the ceremony and talked about Nevadans who had paid the ultimate sacrifice in defending the United States. He also encouraged everyone to thank those who died and their families for the liberty and independence that we enjoy because of their sacrifice.

The Nevada Department of Veterans Services hosted the ceremony and invited Boulder City Mayor Kiernan McManus to lead the Pledge of Allegiance.

“Both my father and grandfather were World War II U.S. Navy veterans and both of them came home after the war,” he said after the ceremony. “I know people who have died and today is the day to remember them.”

He also said it’s an “honor” for Boulder City to have the Southern Nevada Veterans Memorial Cemetery located in town.

On Sunday, May 29, the Las Vegas Chapter 51 of the Special Forces Association joined with the Vietnam Vets Legacy Vets Motorcycle Club for a ceremony at the cemetery.

The ceremony followed the 28th annual Fly Your Flags Over Hoover Dam Run, which featured hundreds of motorcyclists driving from Hoover Dam, past the Southern Nevada State Veterans Home to the cemetery.

Whether a soldier died in combat or not, they need to be remembered for their service and what that means to the country, said Kent Helland, president of the Las Vegas Chapter of the Special Forces Association.

“It’s too easy to forget,” he said. “We have got to get out to honor those who have fallen.”

“I am grateful to all who made it possible to be here,” said Arrow, president of the motorcycle club who served in the Navy on a nuclear submarine from 1991 to 2000.

He said service means sacrifice and when a soldier loses their life the cost ripples through that person’s family and community.

Arrow ended his remarks by encouraging those attending to “be an American worth fighting for.”

He said they are a very patriotic organization and wanted to show their support for veterans and active military members.

Brandon “Cholo” Burgess, the group’s road captain, echoed the sentiment, saying he participated in the annual run because of what it stands for.

“There’s nothing like it,” said motorcyclist Rich Cavano, who participated in the run for the second time this year.

Cavano said it’s important to honor the nation’s veterans. In addition to riding from the dam to the cemetery, he helped place flags on the veterans’ gravesites Saturday, May 28, morning with fellow members of the carpenters union.