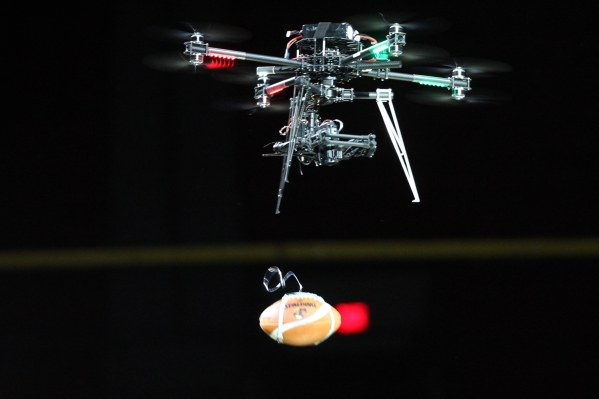 The Federal Aviation Administration’s efforts to draft regulations for small unmanned aerial vehicles — those that are 55 pounds or lighter — have put the agency’s work with large drones on the back burner.

But for now, that’s all right with the Governor’s Office of Economic Development, which is heading the state’s efforts to be the nation’s leading test site for drones.

Tom Wilzcek, aerospace and defense specialist with the governor’s office, said Nevada and the five other states selected by the FAA to test drones, have received a new broad-area operating certificate that enables the state’s unmanned aerial system partners to fly large data collection flights under 200 feet high anywhere in the country if it advances a public purpose.

Wilzcek explained that means Nevada partners will be able to fly their aircraft under the new certificate to collect data for projects such as agriculture production, wildlife management and for research projects undertaken by UNLV and the University of Nevada, Reno.

Wilzcek explained the use of the certificate during a public meeting Sept. 17 on drone operations at Nevada test sites, which sponsored by the governor’s office and the FAA.

One of the biggest complaints the drone industry has had about expanding its potential is the pace at which the FAA has moved to integrate drones into the nation’s airspace.

Even Nevada’s contracted drone management leaders, the Nevada Institute of Autonomous Systems, have been frustrated with the slow pace of progress. The FAA is unapologetic about the pace, insisting that its top priority is safety and that establishing a safe system is taking longer than anticipated.

The FAA is in the midst of establishing small drone regulations that will oversee the vast majority of aircraft and pilots in the unmanned aerial system industry. Public comment on the proposed regulations has ended, and the agency will now process and respond to more than 4,500 comments before approving and publishing the regulations early next year.

In addition, the FAA has developed an exemption process that enables companies the ability to fly their aircraft if they get permission from the FAA.

Bill Crozier, acting manager of the FAA’s unmanned aerial systems integration office, said the agency has received more than 3,000 exemption requests and has granted 1,500, including 21 with operations based in Nevada.

In the meantime, the state will continue to work with its partners under the programs it already has established at the test sites and through the new operating certificate.

Nevada is the only drone test state to have a designated airworthiness representative that can certify an unmanned aircraft in addition to the FAA.