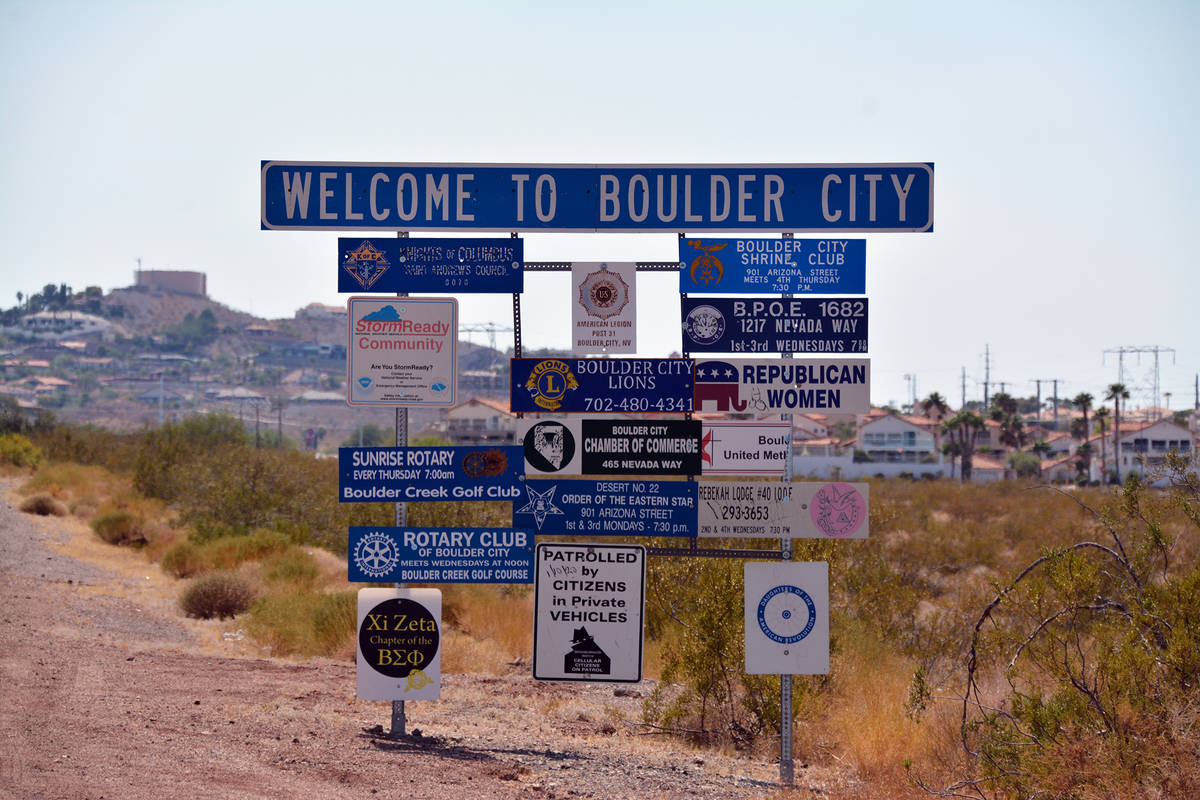 (Celia Shortt Goodyear/Boulder City Review) Some of Boulder City's leaders want to explore other industries besides tourism to grow the local economy. 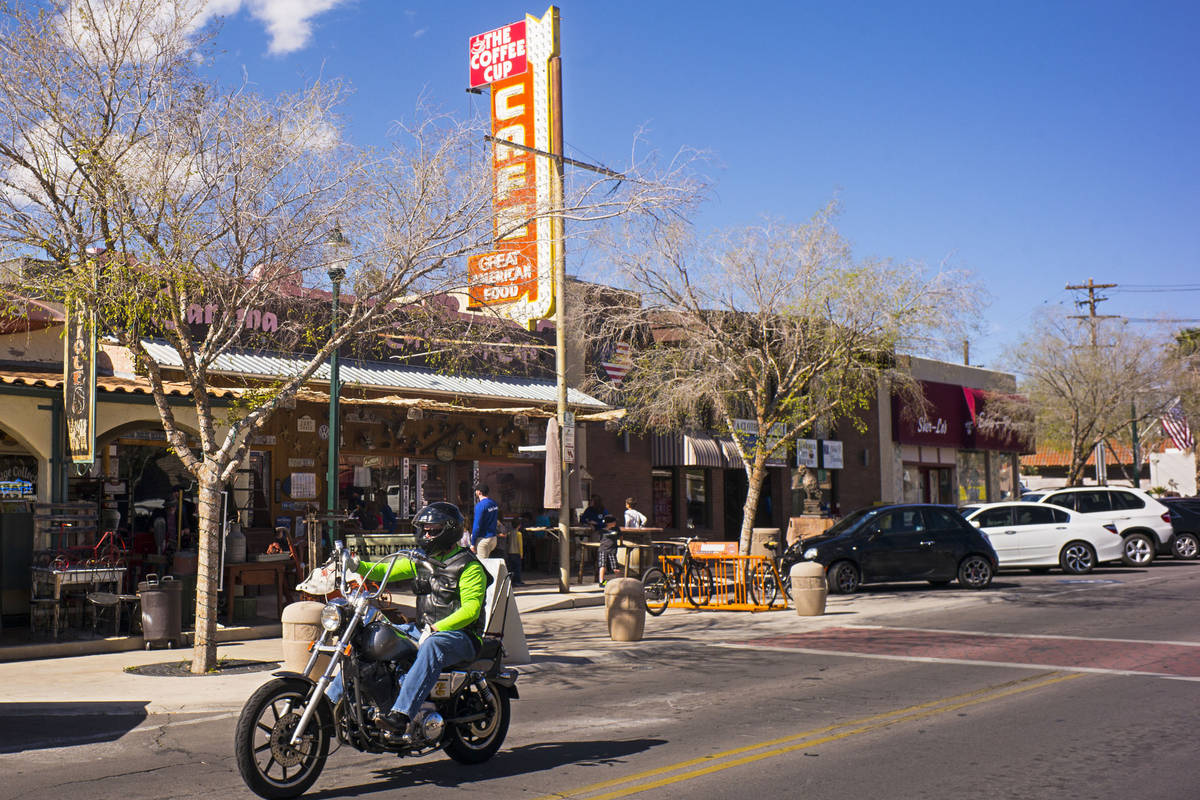 (Chase Stevens/Las Vegas Review-Journal) Nearly half of the customers dining at the World Famous Coffee Cup Cafe on Nevada Way are tourists, many on their way to visit Hoover Dam or the Grand Canyon.

The volatile nature of tourism, which plays a significant role in Boulder City’s economy, has led some of the town’s leadership to explore the idea of attracting other industry opportunities to the community.

During the Community Development Department’s annual report at the Aug. 25 City Council meeting, director Michael Mays said tourism was down 40 percent in March due to the COVID-19 pandemic.

After the presentation, Mayor Kiernan McManus said they needed to remember that they had been “talked into” the idea that Boulder City’s only business is tourism. He said tourism is “a very poor choice to base an economy on” and he wanted to see more emphasis on other types of businesses that would provide “stable employment.”

“The focus is not to limit tourism but to promote a diversified economy that will not be as susceptible to economic downturns as tourism has proven to be in the past,” he said after the meeting. “Boulder City is fortunate … that our economy is anchored by federal agencies that provide stable, well-paying employment. We have seen a manufacturing company like Fisher (Space) Pen have strong success in our community. This company has provided a welcome level of stability for many years. Information technology companies often rely on small firms to take on software engineering projects.”

Councilwoman Judy Hoskins said in terms of economic development, she’d like to see boat building or repair, an IT development company and trade schools.

Both she and McManus said they would like it if a second grocery store was added to the local economy.

“A second grocery store is a priority of mine and is mentioned frequently as needed by residents,” McManus said. “While I have discussed these types of projects with the city manager and the chamber of commerce CEO, I have not received much support.”

The town has been without a second grocery store since Haggen closed in 2015. Currently, that building at 1031 Boulder City Parkway is home to Medolac Laboratories. The company processes human milk for babies.

Even with the up and down of tourism, it is still a large part of Boulder City’s economy and affects local businesses.

“We collect data from VisaVue Travel, which represents a portion of all business credit card transactions that occur within the community. … In the fourth quarter of 2019 … 55 percent of VisaVue business transaction dollars came from credit card holders with ZIP codes outside of Boulder City,” Mays said.

He said that number is only a sample of all local transactions and it does not include those from other credit cards or cash.

“This is similar to the data collected in … (the fourth quarter of 2018),” he added. “Due to the city’s agreement with VisaVue, dollar amounts cannot be provided. Staff is continuing to look for ways to capture tourism dollar impact on the local economy.”

For the World Famous Coffee Cup Cafe, tourists driving to and through Boulder City make up a large part of its business.

“I would say it’s about 49 percent of our business, people coming to visit Hoover Dam and Grand Canyon,” said Terry Stevens, co-owner.

Stevens said the people who fly into Las Vegas to visit those two places and others will drive through town and stop by the restaurant. He also has customers who come on their way to and from Lake Mead National Recreation Area.

Since the number of tourists has dropped because of the pandemic, he said business has dropped during the week.

In March, the National Park Service reported that Lake Mead was the sixth most visited recreation site, with 7,578,958 in 2019. In 2018, visitors to Lake Mead brought in about $336 million to Boulder City and the surrounding communities.

Stevens also said the visitors who come in for different events in town make up another large chunk of their business.

“Art in the Park is our biggest weekend,” he said.

Victoria George, director of marketing and community engagement for Boulder City Hospital, said the foundation provides approximately $500,000 in raised funds to the facility. It is used to purchase medical equipment and supplies.

“Tourism is essential to the greater Las Vegas Valley, and the impacts of the COVID-19 pandemic continue to have an effect on area businesses and the overall economy. … Boulder City Hospital is a nonprofit hospital and the only critical access hospital in Nevada that is not supported by taxes … (it) relies on the fundraising efforts of the foundation to support our mission serving the health and well-being of the residents of Boulder City and the surrounding valley as well as visitors to our area,” she said.

Another element of the local tourism economy is hotels.

Archie Patel, owner of the Sands Motel, said tourists make up 90 percent of their business.

“Tourists are very important,” she said.

Patel purchased the property about a year ago and said many of the tourists who stayed there are from out of the country and headed to the Grand Canyon. Since there are fewer tourists now, Patel said they have started to doing more weekly and short-term rentals to survive.

“I get a lot of boat traffic and a lot of lake traffic,” he said.

Parker, who purchased the property in June 2018, said March and April were his toughest months, but business picked up after Memorial Day as more people started going to Lake Mead and because of the motel’s loyal customers.

“Coming out of the winter, the pandemic really crushed us,” he said.

He also said he’s been having more guests come from Las Vegas or Henderson and book a room to just get out for a little while.

Boulder City Chamber of Commerce CEO Jill Rowland-Lagan said the town has become a destination for many people because of its “historic charm, quaint nature and expansive and inviting outdoor recreation.”

“We offer something for everyone and every age,” she said. “It is the chamber’s mission to continue to stay the course of helping new and seasoned entrepreneurs see their ultimate potential and success. When they soar, we all soar. By working together with community pride, we all continue to keep building BC as the amazing destination it has been since the building of Hoover Dam.”