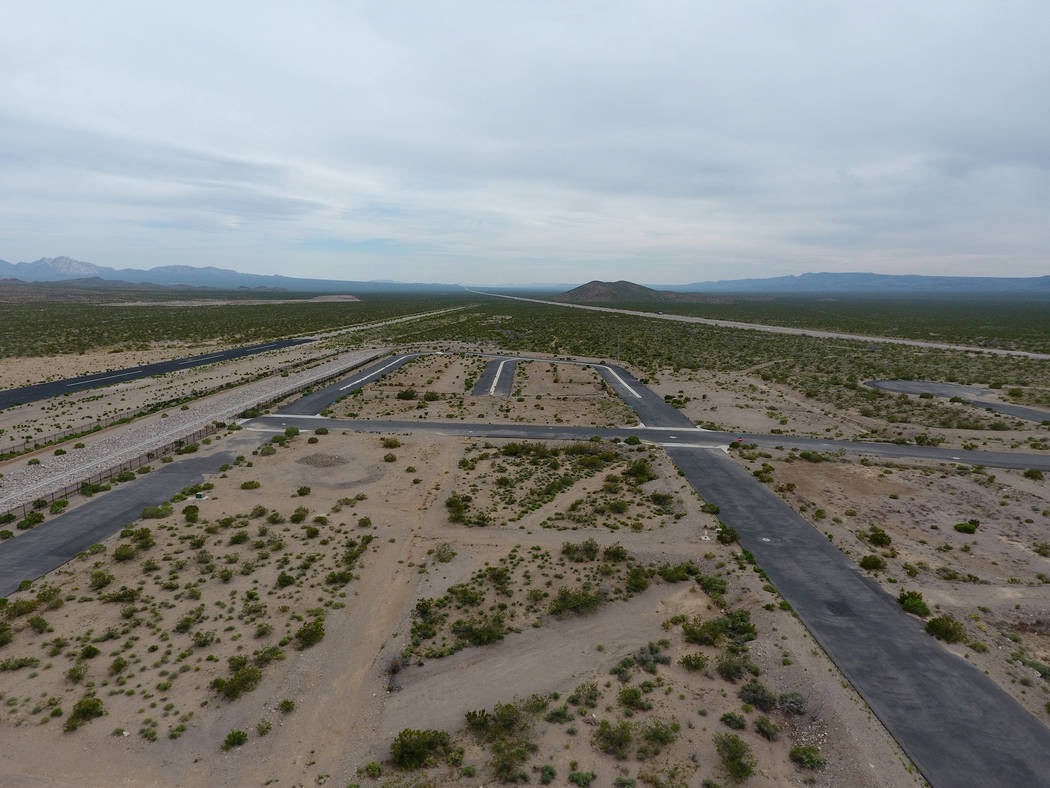 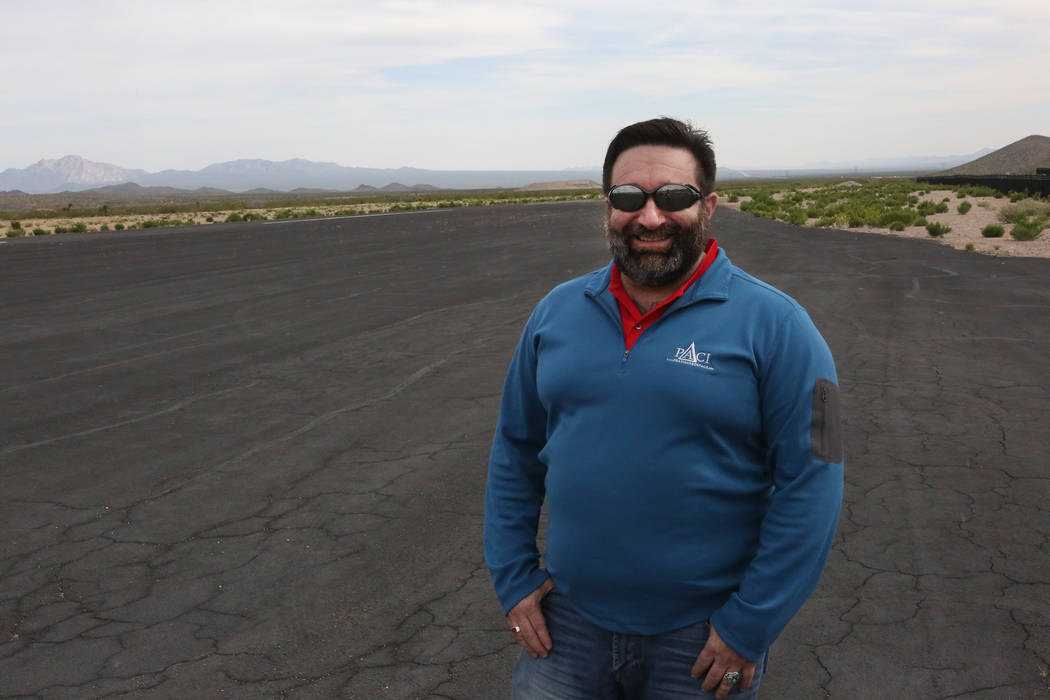 SEARCHLIGHT — The once-abandoned subdivision off the side of U.S. Highway 95 is tucked out of view, but there isn’t much to see anyway — just some houseless streets next to a mile-long airstrip.

But in time, if Jonathan Daniels has his way, the property will be buzzing with drones.

Daniels, founder of Henderson-based Praxis Aerospace Concepts International, recently leased about an acre of land at the Searchlight Airpark for his drone-testing business.

He plans to start working from temporary trailers — the site has water and power hook-ups — by mid-May and eventually build a permanent facility. As part of his agreement with the property owner, Daniels also will manage the towerless airport.

At first glance, Searchlight seems an unlikely place for aviation technology. It’s a pint-sized town about 40 miles south of Boulder City with abandoned mines and mobile homes and rarely gets new bursts of commerce.

But the area has open airspace for drone testing, Daniels said, unlike the more-restricted Las Vegas Valley, as well as a paved airstrip next to paved streets with utility service. His goal is to make the airpark a launch point to fly back and forth from the Eldorado droneport in Boulder City — test flights that could open drones to a range of commercial uses, he said.

Government officials and industry executives are trying to make Nevada a major hub of drone development and testing. It’s too early to say whether Daniels’ arrival in Searchlight will spark a big inflow of other unmanned-aircraft businesses, but he would at least bring some life to a boom-era real estate project that crashed with the economy and looks like a ghost town.

“If I could have designed a turnkey, instant airport for unmanned aircraft, it would look just like that,” he said.

Daniels, a 45-year-old former Army helicopter pilot and infantryman, founded Praxis in 2011. The company mostly provides testing, training and other services for owners and operators of drones and other robotics.

He also is part of the group that plans to develop and operate the Eldorado Droneport, a 50-acre property designed to include a 15,000-square-foot terminal and 860,000 square feet of warehouse, hangar, training, office and research and development space.

His goal is to have people flying drones from Searchlight to Eldorado and back, a roughly 35-mile trip each way.

Drone operators typically can fly only within their line of sight, but Daniels said he wants authorization to let people fly back and forth without needing to drive alongside the aircraft.

He said he stumbled across the Searchlight Airpark when his group was looking for places to expand beyond Boulder City. As Daniels sees it, being able to link the two is “a sheer serendipitous event.”

If drone operators can show the Federal Aviation Administration that they can fly longer distances without visual line of sight, he figures it could help them secure approvals for such commercial uses as parcel delivery or inspections of pipelines, railroads, power plants, farms and forest fires.

“The golden ticket to get there is being able to prove the technology to the FAA,” he said.

Daniels contacted airpark owner Bill Turnbull of Seattle and pitched him on the proposed use. Turnbull, whose company RC Aerodyne sells remote-controlled helicopters and airplanes, said he hasn’t determined what to do with the rest of his roughly 40-acre spread.

Located at the south edge of Searchlight, the airpark was designed to have dozens of houses and aircraft hangars, a community where people could fly in and out as they pleased, similar to the tiny town of Cal-Nev-Ari about 10 miles south.

The developers, who teamed up in 2004 during the housing bubble, built roads and installed street signs, power boxes and fire hydrants. But by 2010, after the economy crashed, one partner had sued the other, and by 2011 the airstrip was “in disrepair and deteriorating” because the developers had defaulted on their loan, county documents say.

Lenders foreclosed on the project site in 2011. Turnbull and his wife, Joan, bought it in 2015 for $400,000. Their holdings include a portion of the airstrip, the rest of which is owned by the federal government.

Asked what he would do if he could design the airpark to his liking, Daniels said he would want traditional airport facilities such as hangars, flight training and fuel service, with a cluster of companies that work in small-aircraft aviation.

“That’s important for an airport,” he said. “Otherwise, it’s just a chunk of dirt.”

Jonathan Daniels at a glance