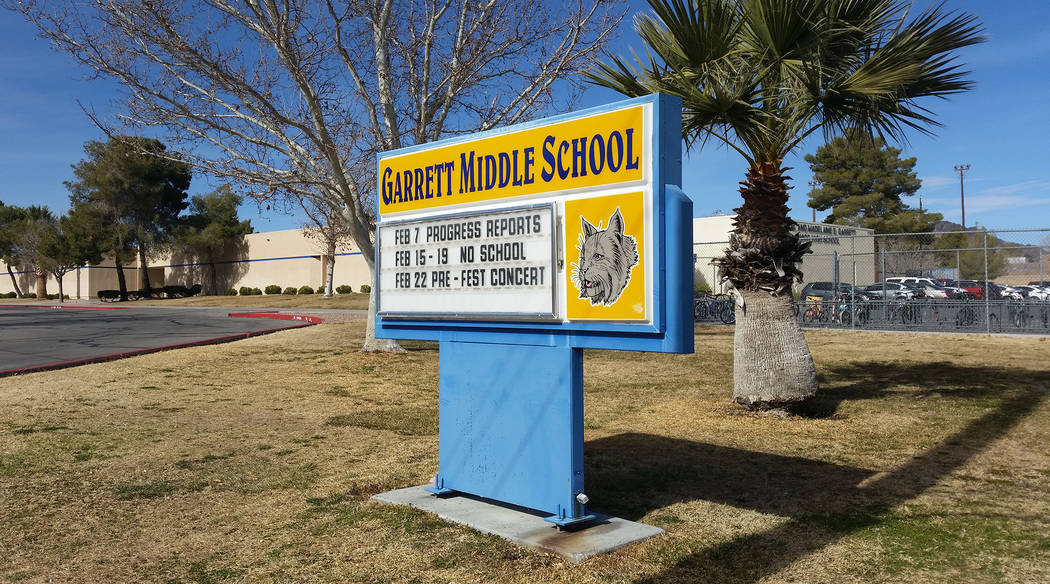 Garrett Junior High School should not be affected by the Clark County School District's recent decision to eliminate all the 170 dean positions at middle and high schools.

The Clark County School District will eliminate all 170 dean positions at middle and high schools to close a roughly $17 million deficit projected for the upcoming school year.

Garrett Junior High School in Boulder City should not be affected.

“We don’t have a dean at Garrett so at this time, it doesn’t affect us. … Unfortunately, any school that has a dean or deans will be greatly affected with student safety, discipline and overall campus responsibilities,” Garrett Principal Jamey Hood said. “Schools will be greatly impacted by this move, sad to say.”

Boulder City High School has one dean position, and Principal Amy Wagner said it is a “vital position and will be missed greatly.”

The school district said the deans could fill vacant teaching positions, but that will not work at the high school.

“At this time, Boulder City High School is fully staffed, and we have no openings in the classroom,” Wagner said. “I am still trying to digest this unexpected news and how it will affect our campus and all secondary schools in Clark County. I am hopeful that another solution will be found and these essential people be kept in their positions.”

The announcement in a video from Superintendent Jesus Jara on Monday came after a legislative session that — despite providing additional funding to education — did not leave the district with the estimated $166.9 million it needed to balance its budget for the next school year. The district also faces another $17 million deficit for 2020-21.

“I want to be very clear — this decision was not made lightly,” Jara said in the video. “And I believe all the advocates for education and those elected leaders who are fighting for change would like to avoid this from occurring.”

The district expects the cuts to erase the roughly $17 million deficit it was facing this upcoming school year. About $4.5 million of those savings will roll over to next year, reducing next year’s deficit to about $17 million.

As part of an administrative team, deans handle matters including discipline, attendance and teacher evaluations. The elimination of their positions comes as the district grapples with a rising tide of school violence and an increase in the number of guns on campuses. This school year, the district adopted random school searches with handheld metal detectors and brought four new K-9 officers to sniff out weapons.

Stephen Augspurger, executive director of the Clark County Association of School Administrators and Professional-Technical Employees, said he was stunned that there was no prior communication about the cuts until the video was released.

The lack of communication was “unconscionable behavior” on the superintendent’s part, Augspurger said, and shows a complete disregard for the men and women in such positions.

Augspurger also argued that the move goes against Jara’s previous comments about keeping budget cuts far away from schools. The cuts will further tax administrative teams in schools that are already overworked, he said.

“They are already on overload right now, and to lose another person or two people — or maybe in high schools, three people — that work has to be picked up by somebody,” he said.

The teachers union, which has been threatening to strike at the start of next school year if there are any cuts to classrooms, said it is reviewing the cuts that Jara has proposed.

“Our position has remained the same: There can be no cuts to the classroom,” said Clark County Education Association spokesman Keenan Korth in a statement. “Once we have completed our review, we will be issuing a statement.”

The cuts came at the end of a Legislative session that pumped more money into education. Clark County got an additional $53 million in funding over the biennium after legislators passed an extension of the payroll tax. The Legislature also freed up $26 million in previously restricted funds that the district can now use on general operations.

Educators also are expected to receive a 3 percent raise — a move that Gov. Steve Sisolak outlined in his proposed budget.

Jara still thanked legislators in his announcement for making “huge strides” in much-needed updates, including in the state’s 52-year-old education funding formula. His comments looked to the future for change.

“I am committed, though, during the next two years to fight for continued change and making bigger strides for the long-term gain which benefits Nevada students,” he said.