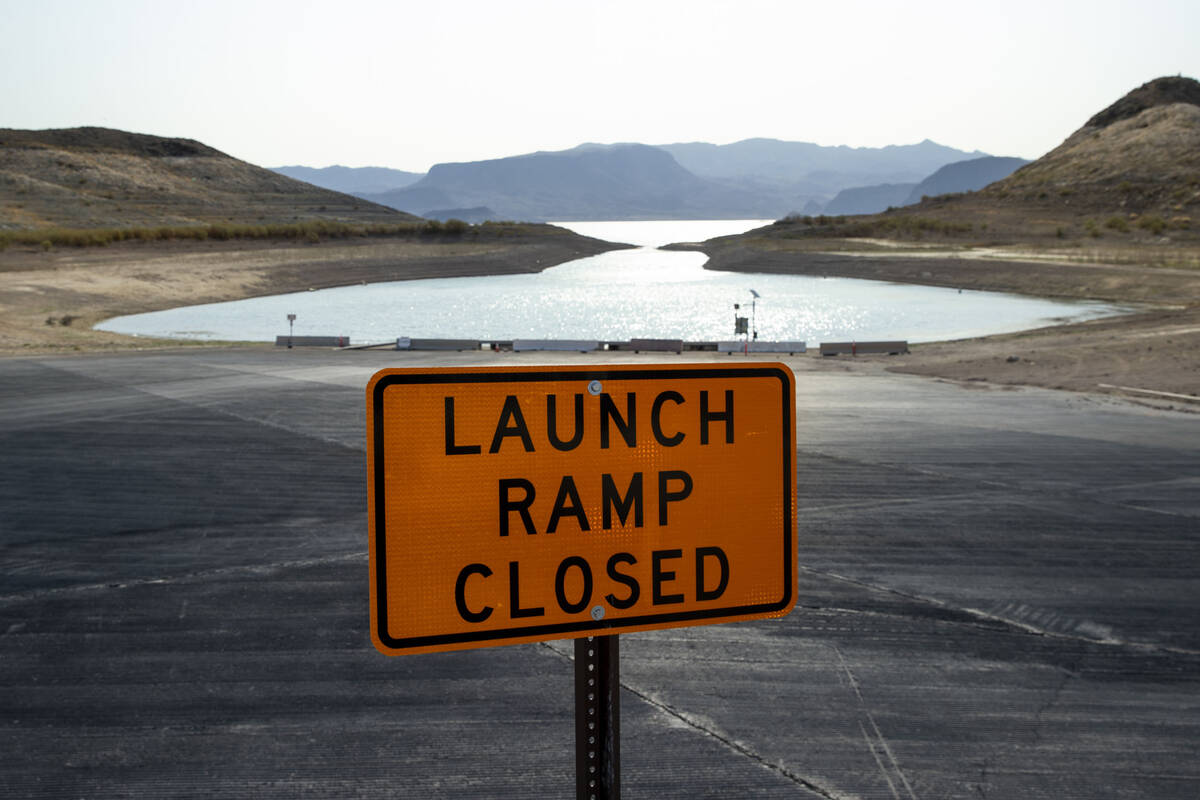 (L.E. Baskow/Special to the Boulder City Review) The boat launch at Boulder Harbor is now closed, as are others at the Lake Mead National Recreation Area. The reservoir hit its lowest water levels in history this summer and federal officials have declared a shortage in the reservoir. 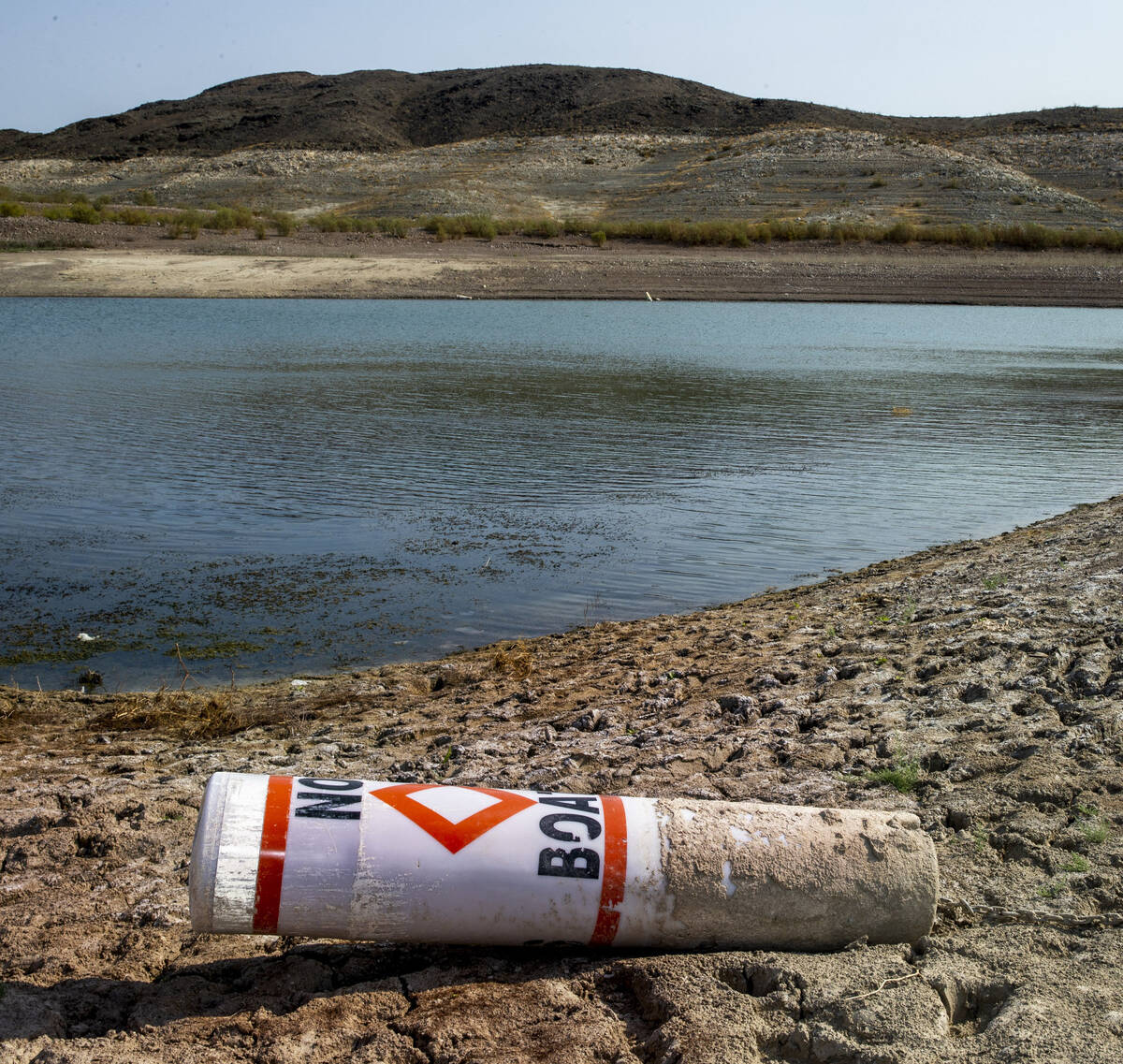 (L.E. Baskow/Special to the Boulder City Review) A buoy sits on the shore from low water near Boulder Harbor at Lake Mead National Recreation Area on Aug. 17. The reservoir hit its lowest water levels in history this summer and federal officials are projecting continued drops.

Projections released Sept. 22 by the U.S. Bureau of Reclamation show Lake Mead has a 22 percent chance of dipping below an elevation of 1,025 feet in 2023. The reservoir has a 66 percent chance of falling below that level in 2025, according to the bureau.

The projections paint a grim picture for the future of the Colorado River, which has been plagued by drought for two decades.

“These updated projections further demonstrate the seriousness of the drought and climate change conditions,” Southern Nevada Water Authority General Manager John Entsminger said in a statement. “This reaffirms the importance of continued water conservation and the investments made over the past 20 years to prepare our community for a warmer, drier future, including developing the Low Lake Level Pumping Station at Lake Mead, acquiring water rights on the Virgin and Muddy rivers, partnering on large-scale water recycling programs and storing eight years of water in reserve for our future use. We are seriously evaluating the next steps our community needs to take to ensure that our water supplies remain reliable.”

Last month, the government declared the first water shortage for Lake Mead, which will result in Nevada having its allocation of water slashed next year.

Mandatory cuts from the government are tied to various lake elevations and are determined by water level projections that are released every August. If an August projection shows the lake level below an elevation of 1,025 feet at the beginning of the following year, then Nevada will enter the third tier of federally mandated cuts.

The shortage declaration made last month will force Nevada to experience the first tier of federal cuts next year.

As of Monday, the water level at Lake Mead was at 1,067 feet. The next tier of federal cuts will come when an August projection shows the level at the beginning of the following year below 1,050 feet.

Lake level is measured in elevation, not depth. An elevation of 1,025 feet means the water level is that many feet above sea level.

The projections released Sept. 22 provide a five-year outlook and are used by the federal government and water users in the Colorado River Basin for water management planning.

They also show a dire outlook for the upper basin.

According to the projections, Lake Powell faces a 3 percent chance next year of declining to a point where the Glen Canyon Dam stops generating power.

The chance that the lake falls below that critical level shoots up to 34 percent the following year, according to the bureau.

“The latest outlook for Lake Powell is troubling,” Wayne Pullan, the bureau’s regional director for the upper basin, said in a statement. “This highlights the importance of continuing to work collaboratively with the basin states, tribes and other partners toward solutions.”

In an effort to protect the lake from approaching that critical level, the federal government began releasing water from upstream reservoirs in July to prop up the water levels. Those supplemental releases are scheduled to continue flowing into Lake Powell through the end of the year.

“The thinking that one big winter is going to save us is foolish,” he said.

The five-year projections released Sept. 22 are based on average flows calculated over the period of 1988 to 2019.

That period contains too many wet years and overestimates how much water will actually be flowing into the reservoirs in the future, Roerink said.

“What the bureau is telling us is that there is going to be more water in the future,” he said. “Who believes that?”

Warren Turkett, natural resource analyst for the Colorado River Commission of Nevada, said using the 30-year average for modeling the projections is a significant improvement over using the average flow since 1906, as has been done in the past.