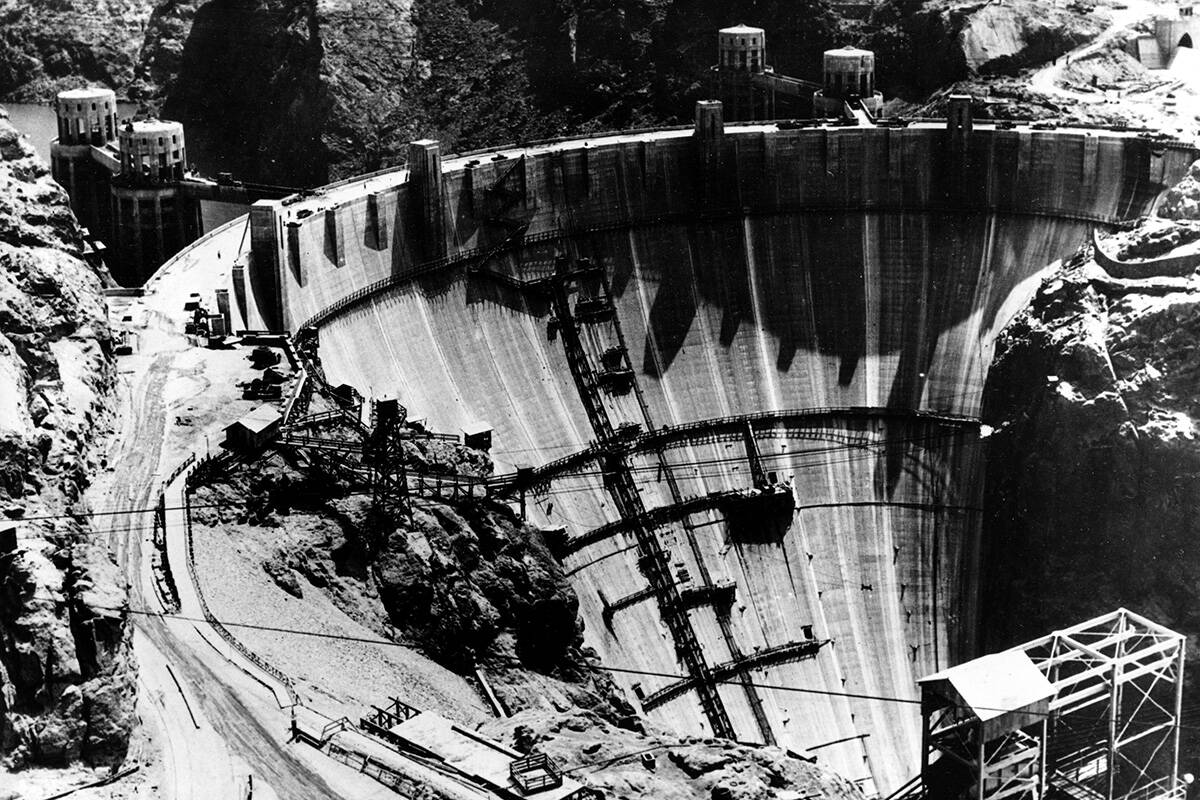 (AP Photo) This aerial view shows a crest of the Hoover Dam, aka Boulder Dam, showing the highway leading across it on July 16, 1935. The road, soon to be opened to the public, provides an easy route between Las Vegas and Kingman, Arizona. The intake towers jut up on the other side of the dam in Boulder City. 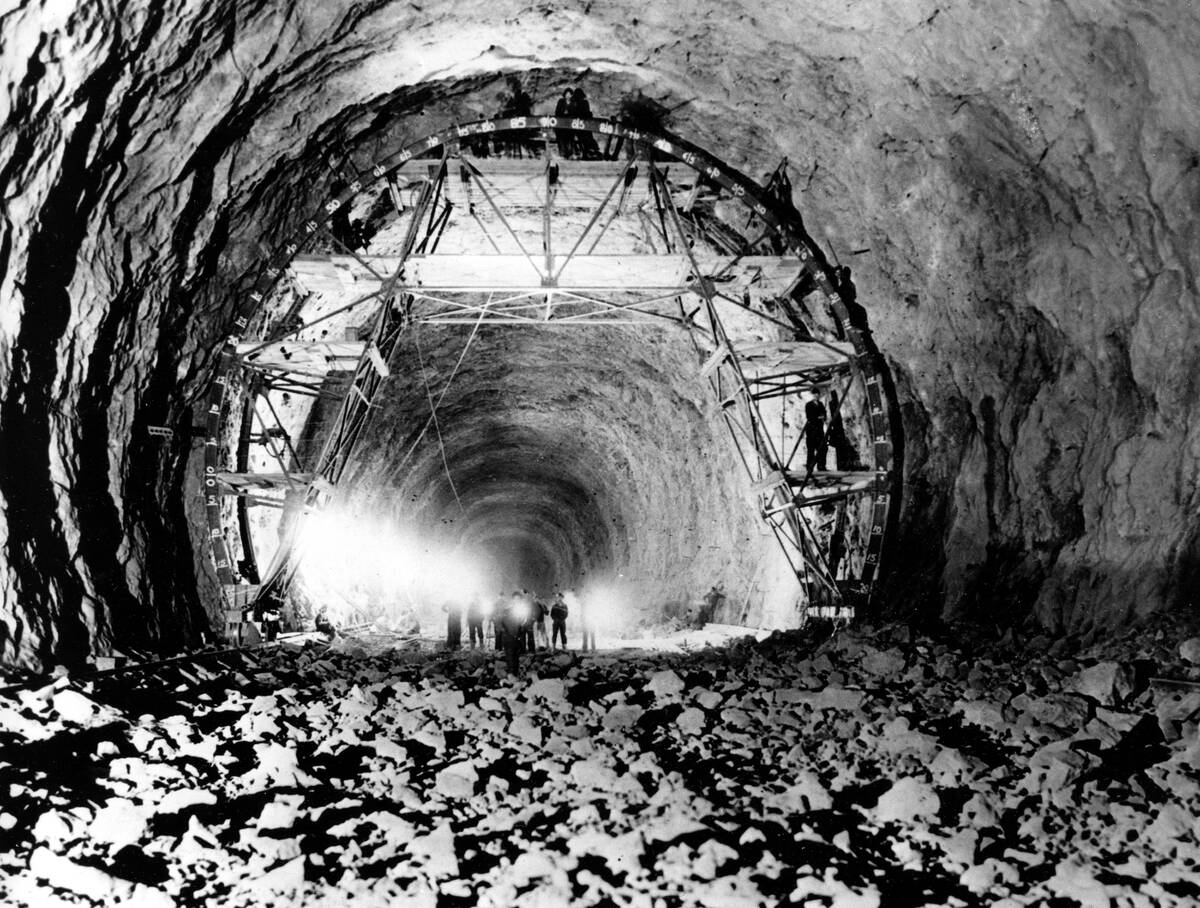 (AP Photo) This view from April 18, 1932, shows the interior of one of the tunnels through which the Colorado River will be diverted around the Hoover Dam site. The project was in the early stages of construction. 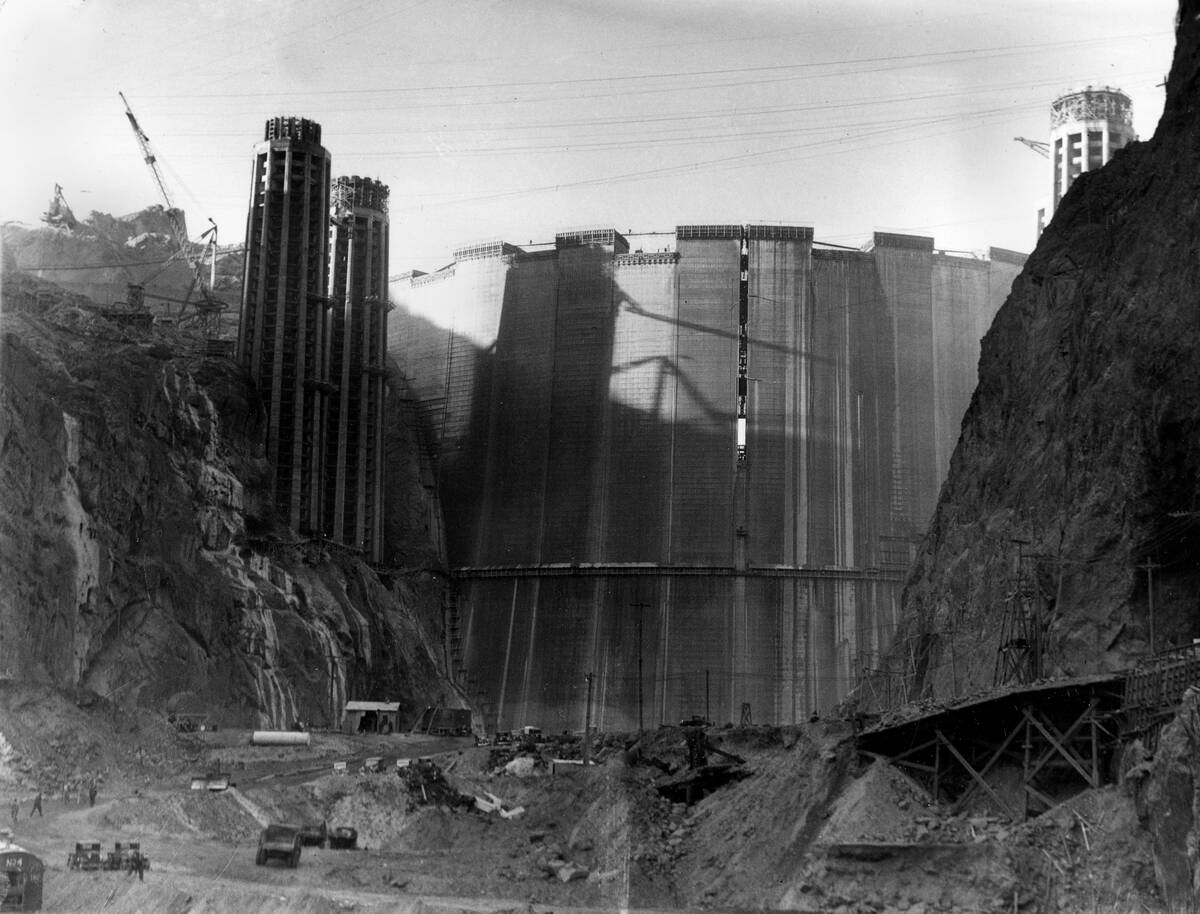 (AP Photo) This is a view of the Hoover Dam from upstream as construction continues near Boulder City, on Feb. 1, 1935. The crack in the upper center of the dam was a space left open for cooling and settling of the concrete and was filled as work progressed. 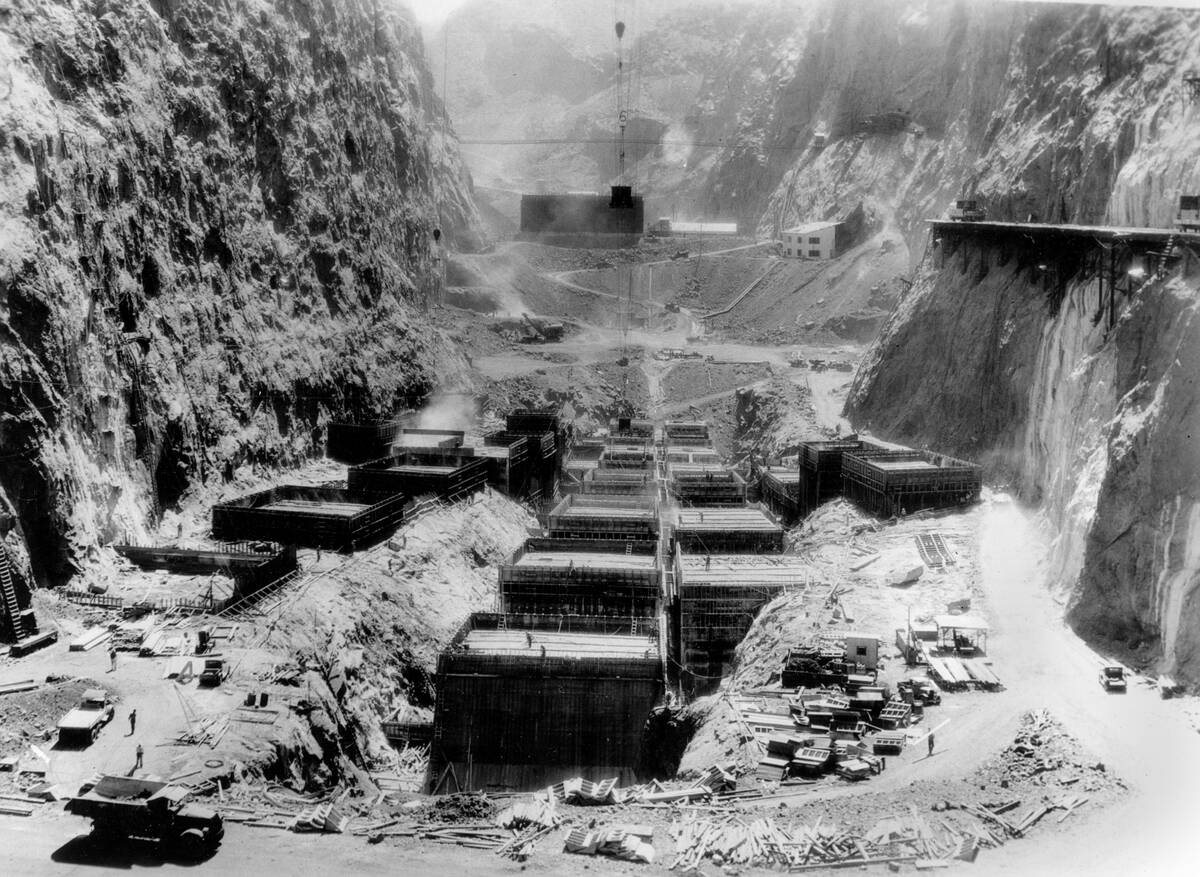 (AP Photo) This is a downstream view of the Hoover Dam taken Aug. 12, 1933, showing the immense concrete blocks rising from the bedrock of Black Canyon's floor, which will be the core of the dam. Concrete was poured into the forms at the rate of about 6,000 cubic yards daily. 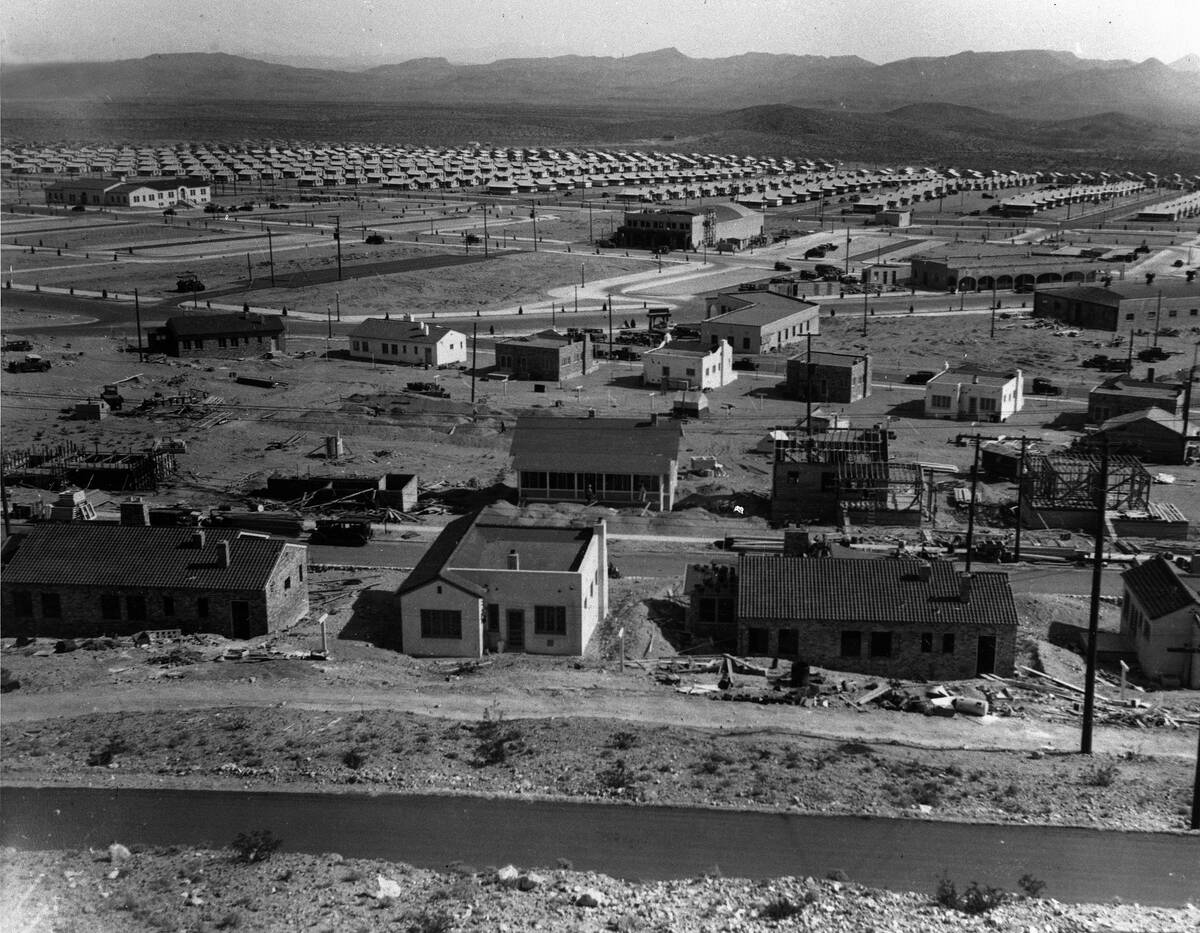 (AP Photo) Boulder City, as seen April 1, 1932, was built about 8 miles from the site of Hoover Dam to house the employees working there. Thirty-five hundred men and their families lived in the city and were transported to the dam site by bus. 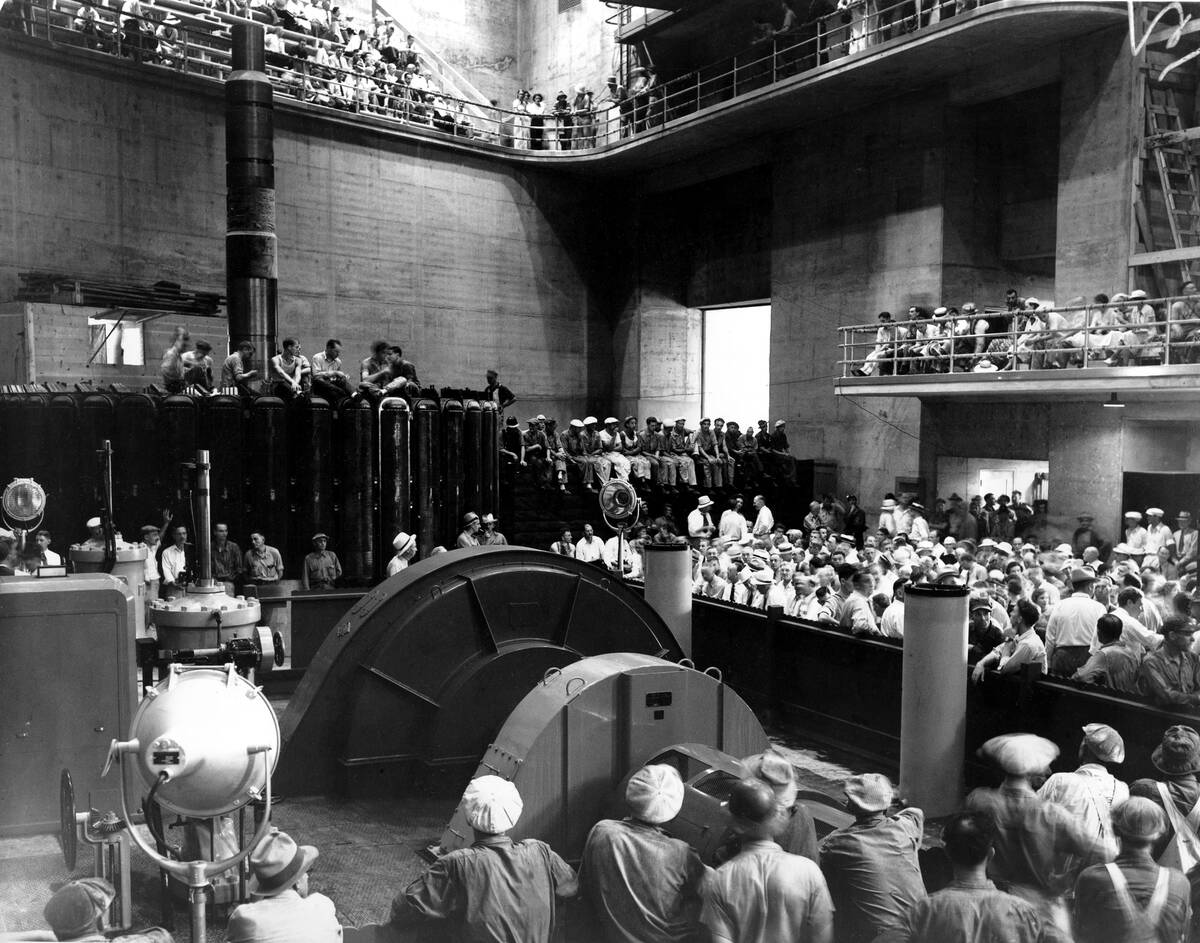 (AP Photo) A crowd assembled in the power house of the Hoover Dam during ceremonies in which U.S. President Franklin Roosevelt pressed a button in Washington, D.C., starting the 3,500 horsepower generator in the foreground, creating the first power from the dam in Boulder City on Sept. 11, 1936. 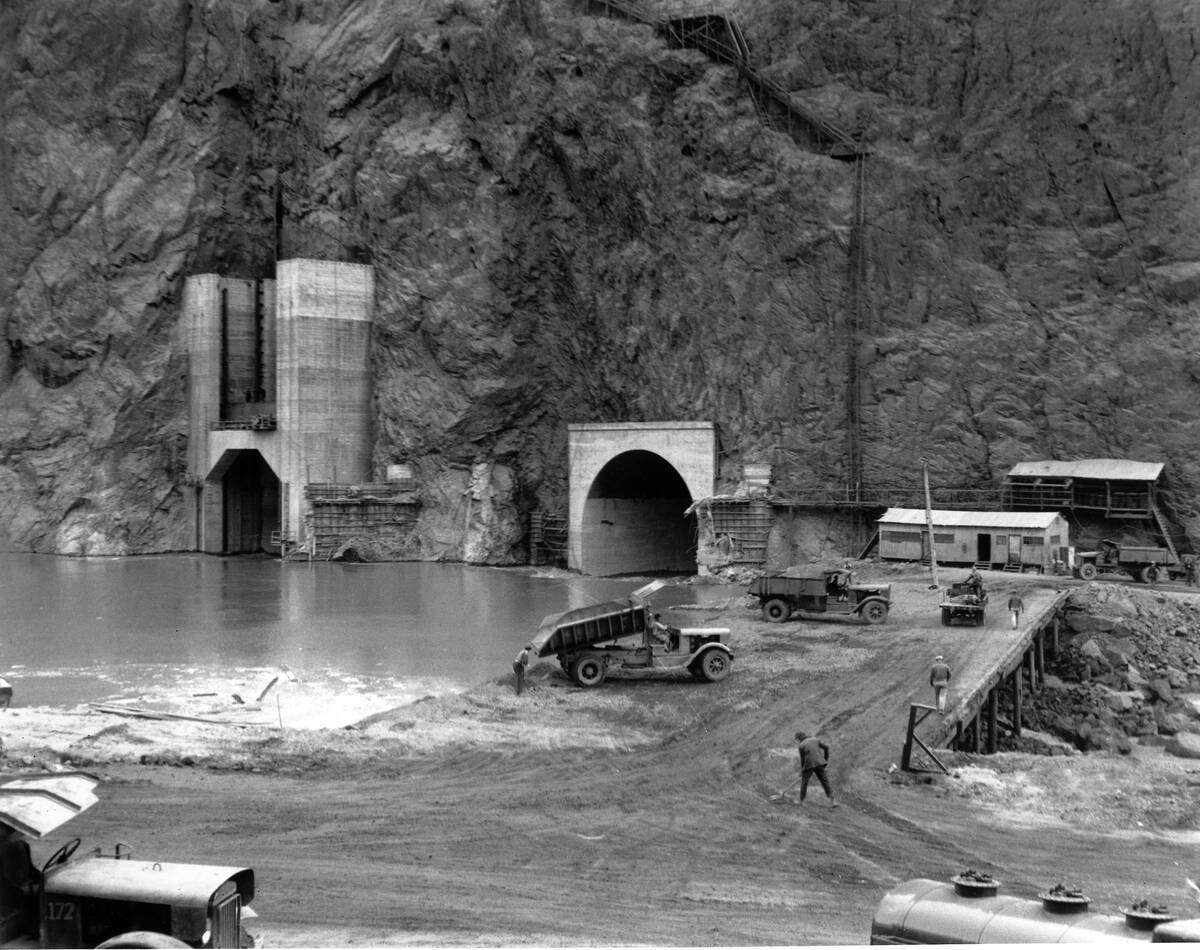 (AP Photo) This photo from Nov. 15, 1932, shows construction of the Hoover Dam, featuring a constant stream of large trucks dumping 50 tons of soil a minute, to build an earth fill dam across the Colorado River, forcing its turbulent waters into two 50-foot diversion tunnels on the Arizona canyon wall. 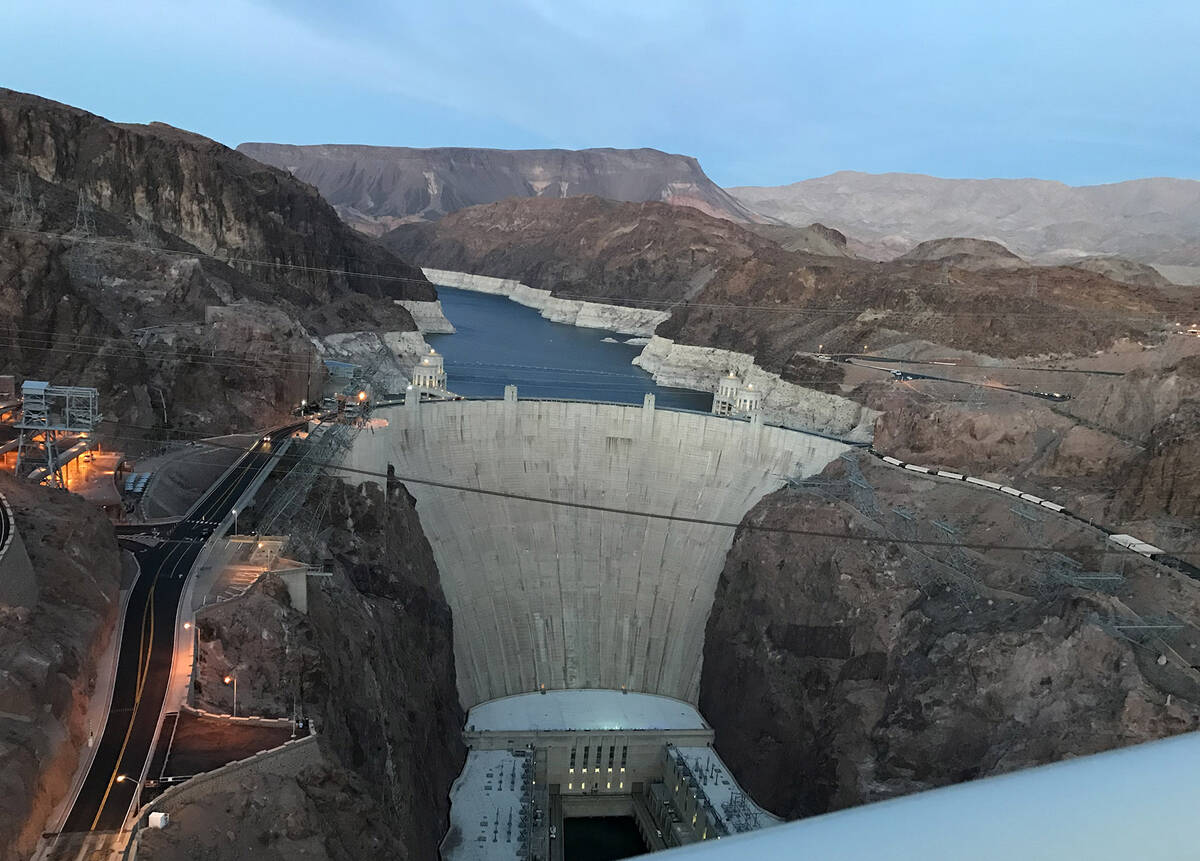 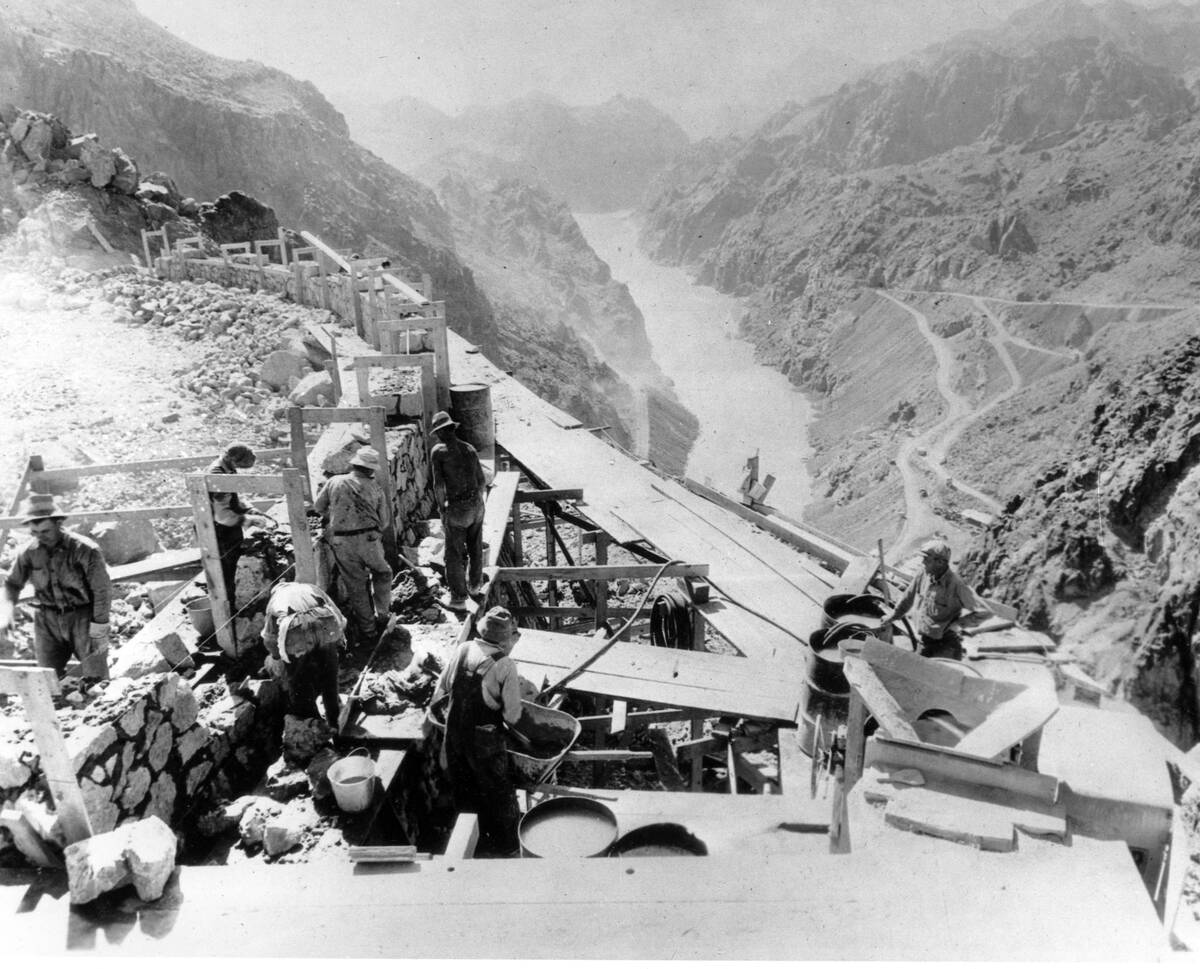 (AP Photo) Construction continues Jan. 9, 1932, as workers build the retaining wall that gives support to the road leading over the top of Hoover Dam. Labor troubles were experienced during the huge engineering project on the Colorado River. 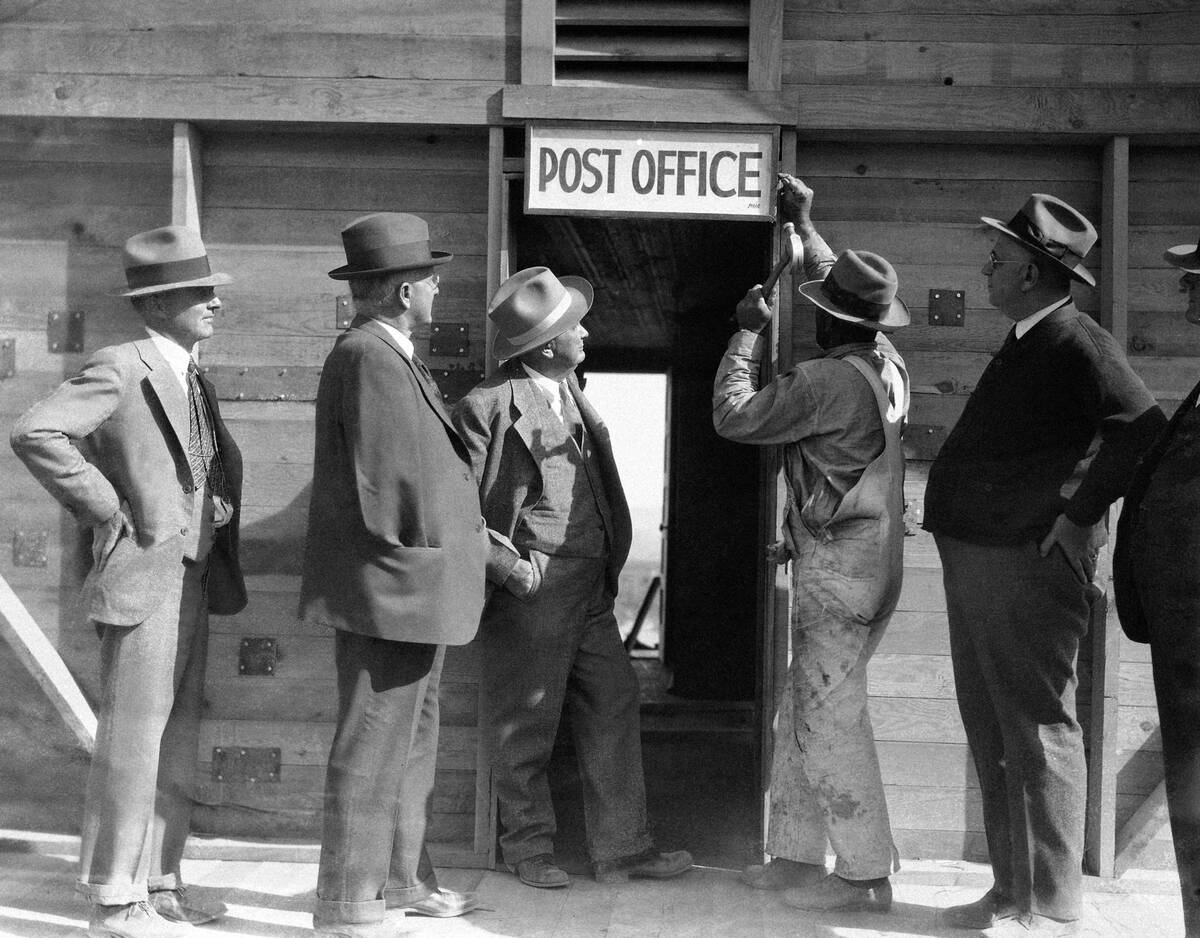 (AP Photo) On the eve of the opening of the post office of Boulder City, the new town springing up as work starts on the gigantic Hoover Dam of the Boulder Canyon Project, Reclamation Bureau officials called to extend best wishes to Postmaster J.L. Finney on April 15, 1931. Featured in the photo are, from left, W.R. Armstrong, general superintendent of the United Pacific; R.F. Walter, chief engineer of the Reclamation Bureau; a carpenter for the Six Company Inc.; Postmaster Finney, Dr. Elwood Mead, commissioner of Reclamation, and P.W. Dent, assistant to Mead. 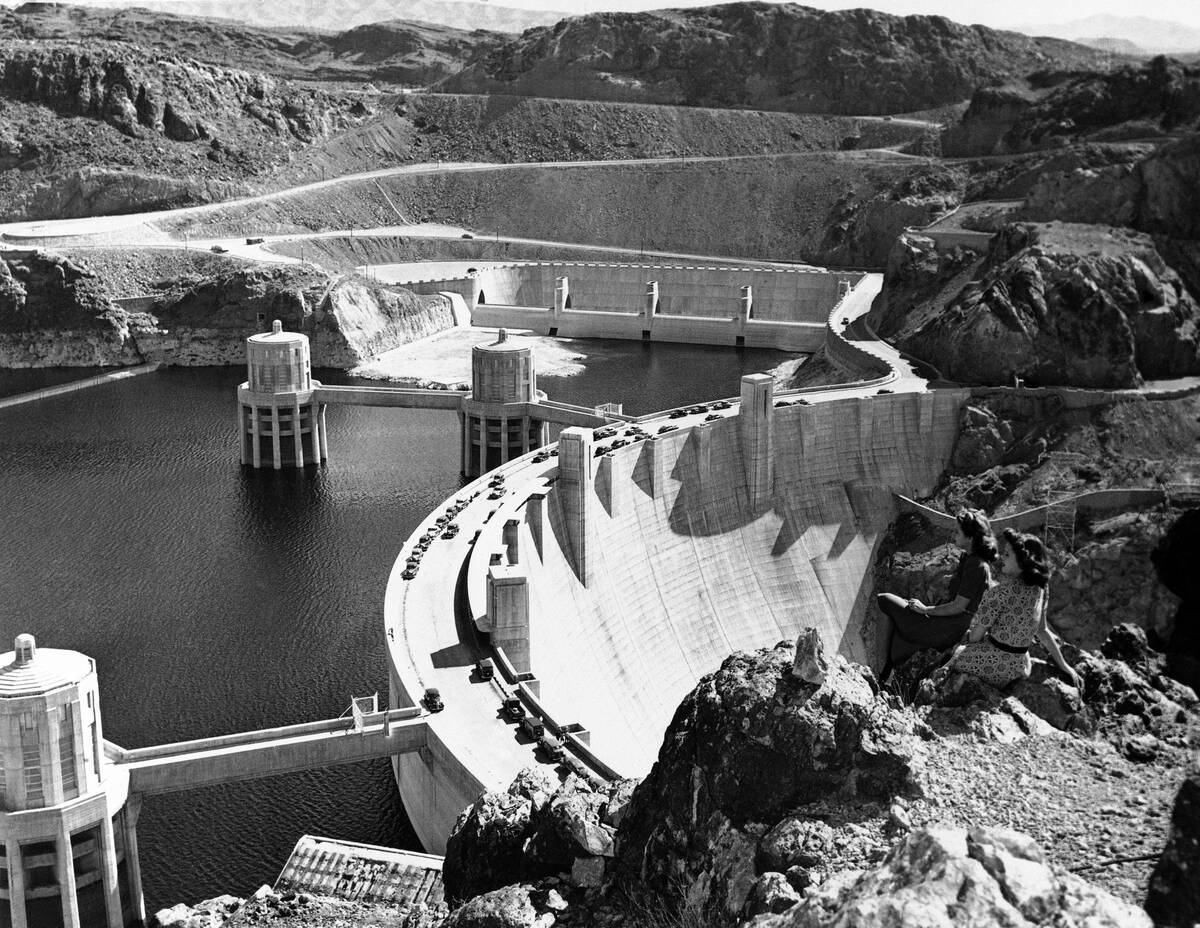 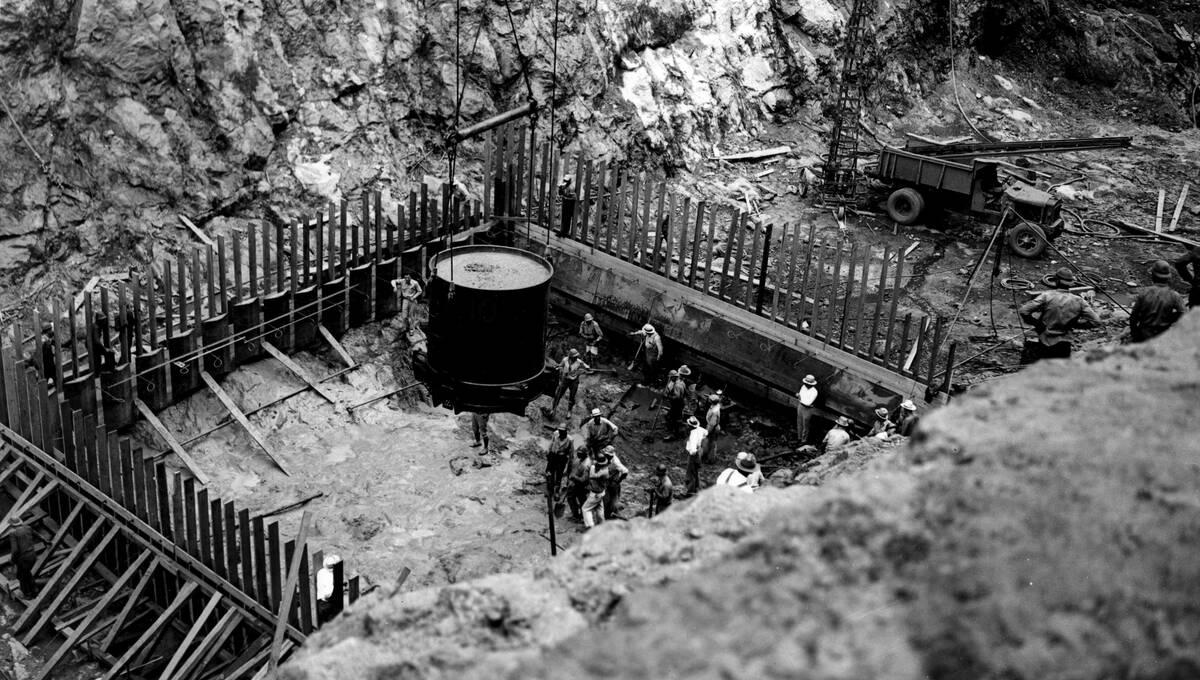 (AP Photo) A steel bucket holding eight cubic yards dumps the first load of concrete for the foundation of the Hoover Dam on the floor of Black Canyon on June 9, 1933. The concrete form is three-sided as the fourth wall will be formed by the live rock of the Arizona reef for the dam. 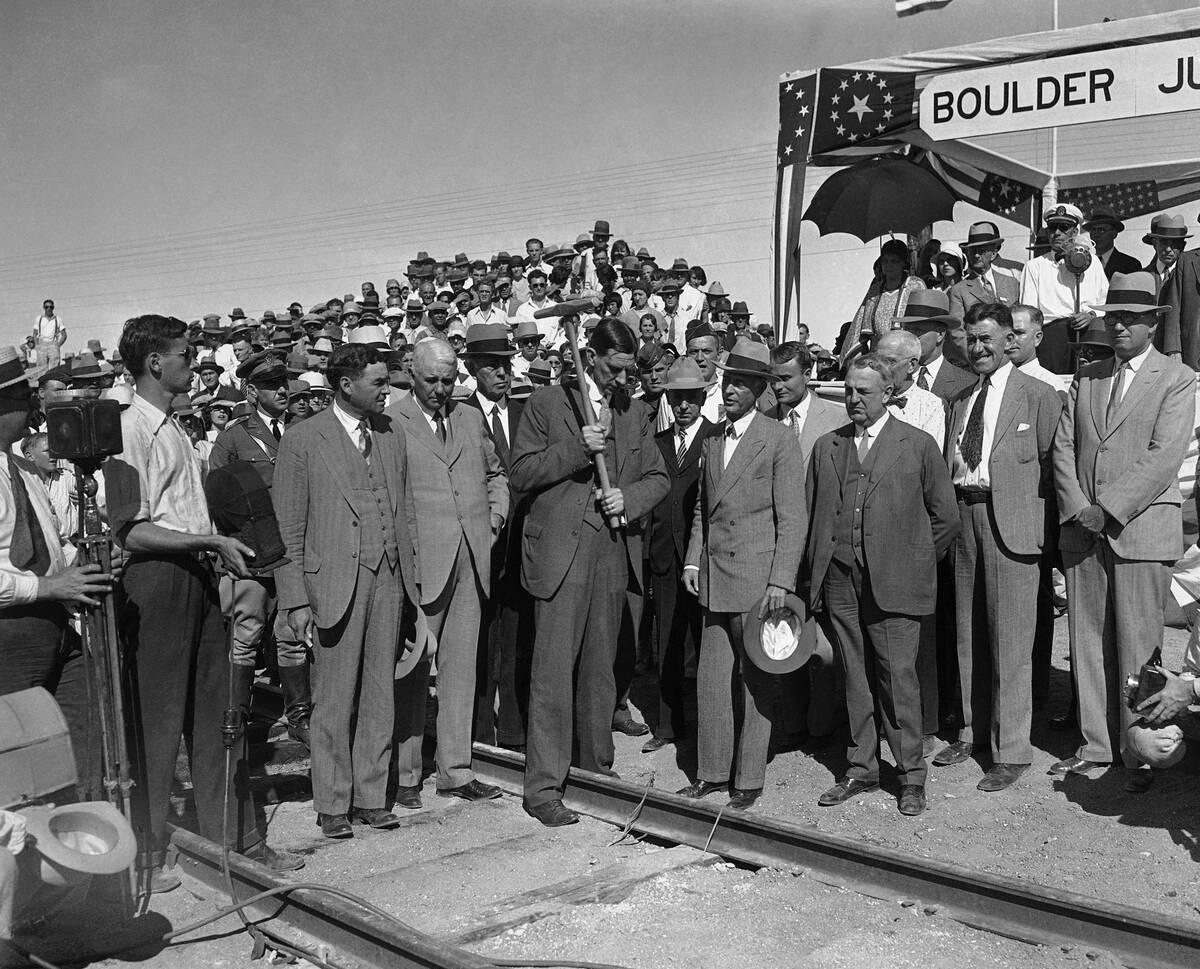 (AP Photo) Secretary Ray Lyman Wilbur drives the last spike into the railroad leading from Las Vegas to the site of the Hoover Dam, better known as the Boulder Dam, on Sept. 19, 1930. The spike, made of silver, signaled actual beginning of construction on the $165,000,000 project. Pictured are, from left, Congressman William Eaton of Colorado; Sen. Key Pittman of Nevada; Secretary Wilbur, and left, Sen. Samuel Shortridge.

The dam was built during the Great Depression, drawing more than 5,000 workers to the cauldron of the Nevada desert.

Boulder City was built to house the workers who came to help build the dam. In 1931 and 1932, the Bureau of Reclamation built homes for its department heads, engineers and employees, as did Six Companies for its executives and workers.

The first permits for commercial buildings were issued in 1931 by Sims Ely, the city manager.

Ninety-six construction workers died constructing the historic dam from 1931 to 1936, according to a report from the U.S. Bureau of Reclamation. More than 100 additional dam workers died off the job from causes including pneumonia, meningitis and typhoid fever.

However, no one is buried in Hoover Dam. The 3.25 million cubic yard dam, covering more than 220 acres, is made of small concrete squares of about 8 cubic feet, according to a 2015 Las Vegas Review-Journal article.

Hoover Dam is a National Historic Landmark and has been rated by the American Society of Civil Engineers as one of America’s Seven Modern Civil Engineering Wonders, the bureau reported.

In 2014, Darwin Colby, the last known Hoover Dam construction worker, died in his sleep at 98.