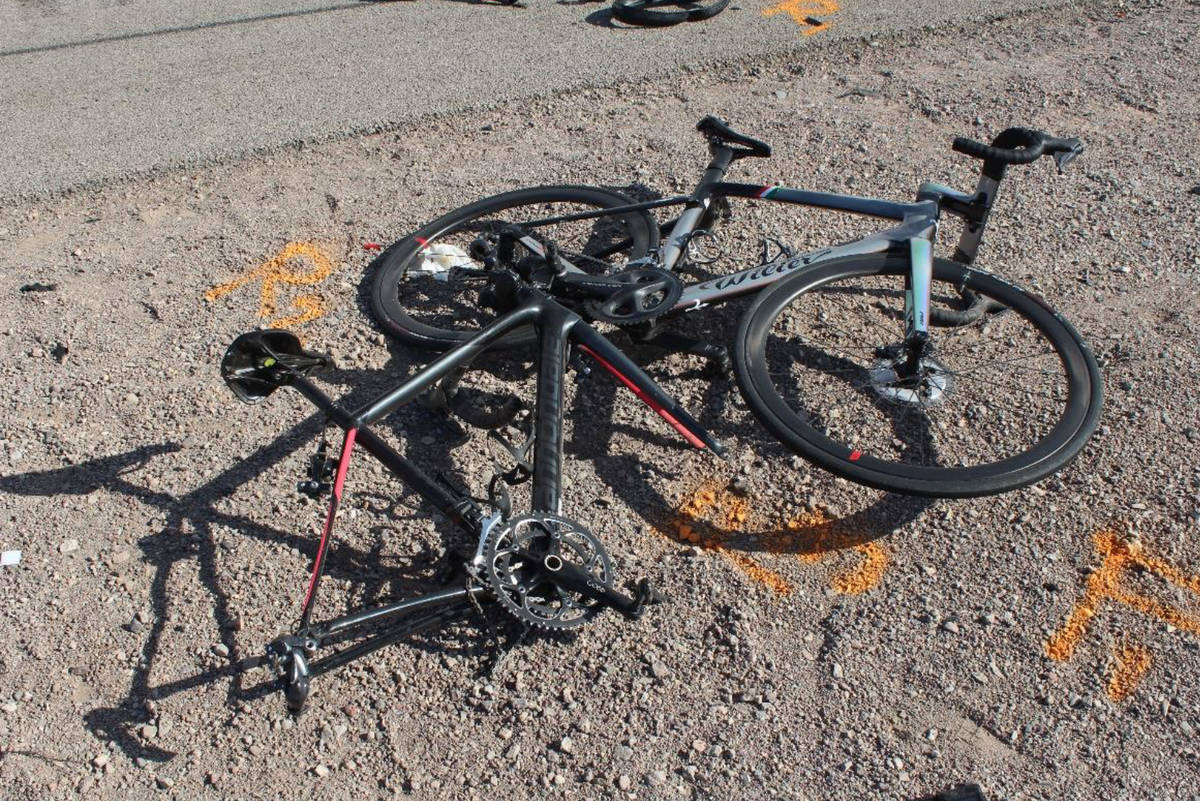 (Nevada Highway Patrol) The remains of several bicycles that were hit by a box truck on U.S. Highway 95 on Thursday, Dec. 10, serve as a reminder for cyclists and motorists to observe all traffic laws.

Despite the high speed limit set on many state roads, cycling is allowed on the majority of them under Nevada law.

This includes the stretch of U.S. Highway 95 near Searchlight where five cyclists were killed Dec. 10. The speed limit there is up to 75 mph, according to Tony Illia, Nevada Department of Transportation spokesman.

“(State) law calls for providing three feet of space for cyclists and/or moving over one lane on multi-lane roads,” Illia said in an email.

There are only a handful of state roads in Nevada that bicycles are not allowed on.

The restricted roads in Southern Nevada are:

■ Interstate 15 between Jean to the south and Lamb Boulevard to the north.

■ U.S. 95 between Wagonwheel Drive in Henderson and Kyle Canyon Road in the northwest.

Before Dec. 10’s multiple fatal crash, cyclist deaths in Clark County were down 50 percent year-over-year through November with three fatal incidents, state data showed. That is despite fatal crashes overall in the county being up 7 percent through the first 11 months of 2020.

Ride with the flow

Cyclists are allowed to travel on roadways with motor vehicles, but should use bike lanes or shoulders whenever possible. Those riding bikes with traffic are required to travel with the flow of traffic, not against it.

Although not engineered for bicycle travel, road shoulders that are 4 feet or more in width can provide added safety for bicyclists while allowing for vehicle traffic flow, NDOT’s Cycling Factbook says. When a bicyclist must share a mixed travel lane with vehicles, the bicyclist needs to ride as far to the right as is practicable within the travel lanes, unless making a turn or going at a comparable rate of speed.

All roadway users should use every opportunity to share the road with others, the factbook reads.

“Whether it’s a state road or a regular ol’ road, the law is very clear that obligation is on the motorist to give wide berth to the cyclist,” said avid cyclist and Clark County Commissioner Justin Jones.

If five or more vehicles are lined up behind a cyclist, he or she is required to move to the side of the road when it’s safe to allow those vehicles to pass.

Cyclists are not required to wear a helmet while riding, although state officials highly recommend the use of them to potentially prevent a serious or fatal injury in the event of a crash.

Motor vehicles are not allowed to travel in bike lanes except under special circumstances, including avoiding a conflict with traffic, an emergency, under the order of a law enforcement officer and entering an alley or driveway, according state law.

State law also requires cyclists to have a white headlight, a red rear reflector and reflectors on each side of a bike for night riding. Having a rear tail light does not exclude a rider from also having a rear red reflector.

State law does not prohibit cyclists from riding on sidewalks, but riders are encouraged to check with the local jurisdiction’s regulations.

Jones often rides on state Routes 159 and 160, popular rides for area enthusiasts that includes Red Rock Canyon, where he’s had near-misses with vehicles.

“I have had my close calls but I’ve been fortunate not to have been in a serious incident,” Jones said.

The Dec. 10. fatal crash, he said, “gives me pause on whether I’ll be back there on my bike right now, because it’s just too close to home.”

Jones believes many in the cycling community could be having second thoughts about road riding.

“One of my good friends is bike lead for Life Time (Fitness) and he told me this morning he’s maybe selling his road bike and sticking to mountains,” Jones said. “He’s just too concerned. He had been hit by a motorist a year or so ago. I do think it’s going to have an effect. It will give a lot of us a pause before we’re confident on getting out there on the road again.”