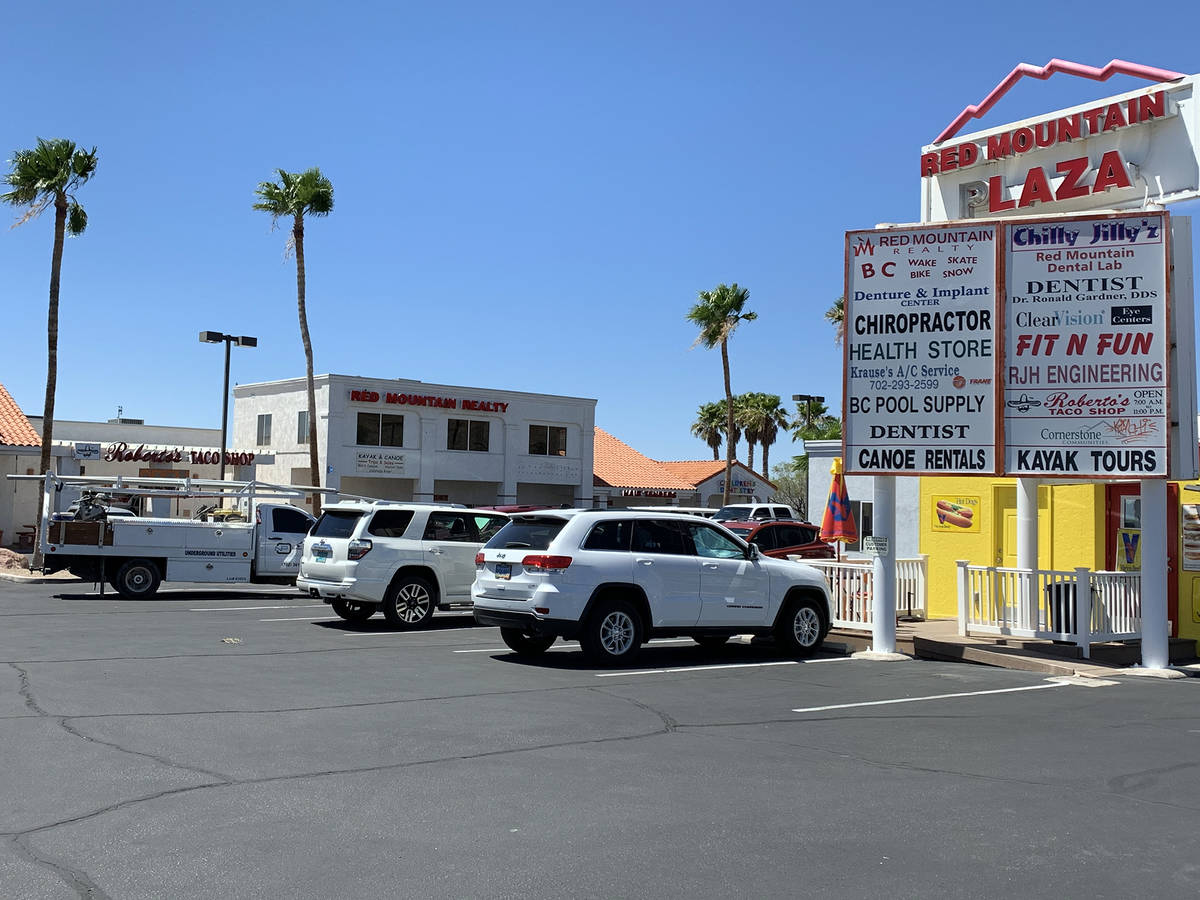 Hali Bernstein Saylor/Boulder City Review The Red Mountain Plaza is receiving up to $9,416 in grant funds from the Redevelopment Agency for repairs to the facility including replacing the stucco and repainting the exterior.

Even though it’s unconstitutional and unenforceable, it’s still illegal to use indecent and obscene language in Boulder City.

At its Tuesday, July 14, meeting, City Council decided to leave section 7-1-8 in the city code that says “no one shall use any indecent or obscene language within the city.”

Police Chief Tim Shea was requesting the section be removed from the code because it is unconstitutional and unenforceable, according to the city attorney’s office.

“It says within the city,” said Councilwoman Claudia Bridges. “That means if I’m standing in front of my house, and I swear or (say) what anyone might consider indecent language, then I’m committing an offense?”

Shea said it would be “fine” if the city attorney’s office wrote a constitutional version of the ordinance.

“We just need a law that we can enforce,” he said.

Councilwoman Tracy Folda disagreed and said in her research she found that obscene language is not protected by the First Amendment as free speech.

“Obscenity is actually not a protected First Amendment right. … The courts have come down and said for obscenity that’s not something that’s protected by the First Amendment, and the state of Nevada has actually stated that local jurisdictions can make laws as far as obscenity goes,” she said. “So I would rather amend this to make it apply to state law.”

However, according to the staff report in the meeting’s agenda packet, it is. The report noted that in the 1971 case Cohen v. California, U.S. Supreme Court Justice John Marshall Harlan II said that “while the particular four-letter word being litigated here is perhaps more distasteful than most others of its genre, it is nevertheless often true that one man’s vulgarity is another’s lyric.”

This ruling is used as a nationwide standard in profanity cases.

Folda also said she didn’t want Boulder City to be the one municipality “that removes it from their books” when Clark County, Las Vegas, North Las Vegas and Henderson all have similar laws.

Additionally, she said this principle still applies today because in February, Virginia banned all swearing on its beaches and even if it isn’t enforceable, the intent still matters.

“It says something about the morals of our city and what we stand for and what we will put up with and how we want people to conduct themselves,” she said.

According to media reports, in February the Virginia House and Senate voted to repeal the current no-swearing law that had been in place since 1792.

Mayor Kiernan McManus suggested the item be held in abeyance until some revisions could be made, but City Clerk Lorene Krumm said that could not be done because action had to be taken within 30 days of the ordinance being introduced and the council traditionally only meets once in July.

Also at Tuesday’s meeting, council did not approve purchasing a new reserve ambulance for $232,258. Funding for the purchase was part of the 2020 fiscal year budget and would come from the vehicle and equipment fund. The budgeted amount was $265,000.

Fire Chief Will Gray said this purchase started before he came to the city and would replace the city’s oldest ambulance, a 2000 International that is overdue for replacement.

Gray said it was outside of the national recommendation for being in service.

He also said the ambulance cannot be used for every trip to the hospital because there are issues with the clutch and the suspension, causing a rough ride for patients.

Hoskins said she could not support purchasing a new ambulance because of budget issues caused by the COVID-19 pandemic.

Folda said she was “not opposed” to getting a new ambulance but was hesitant to vote on something without seeing justification for it.

Bridges said this is a public safety issue for her and during the current health situation people will need to go to the hospital.

Adams said he didn’t want this ambulance to be needed during the current health situation and not have it.

McManus said he was concerned about doing this at this time. He said they don’t know the full effect the pandemic will have on the city’s budget and he is trying to avoid staff layoffs in the future.

The motion to approve the purchase failed 2-3. Folda, McManus and Hoskins voted against it and Bridges and Adams voted for it.