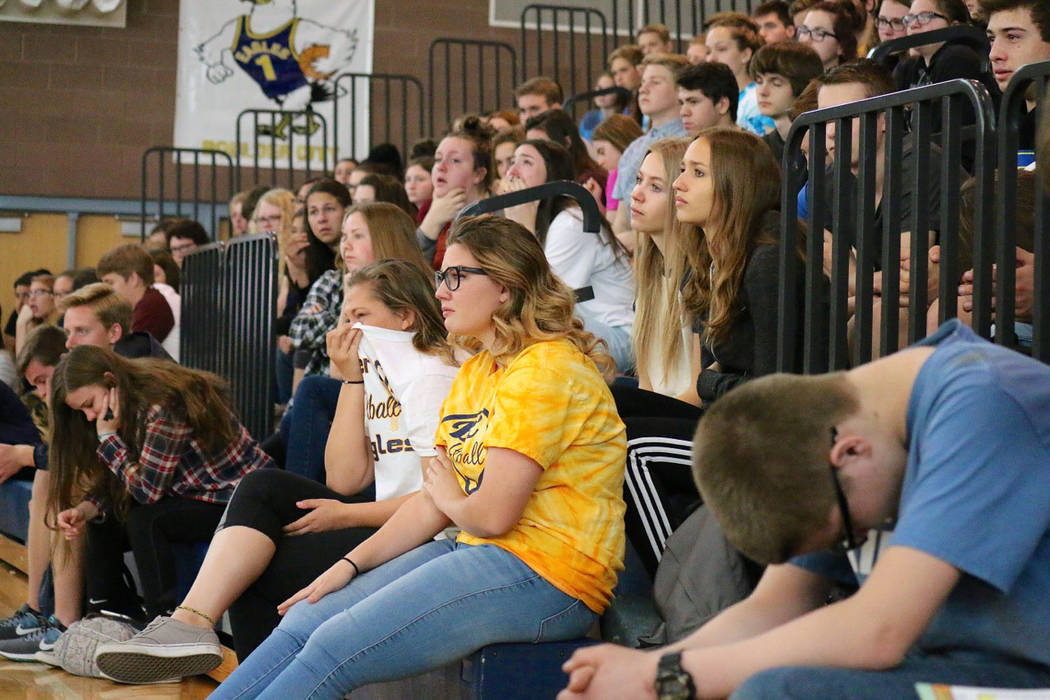 Laura Hubel/Boulder City Review Listening to stories about the dangers of drinking and driving and how it has affected people's lives as part of the Every 15 Minutes program on Friday was an emotional experience for Boulder City High School students. 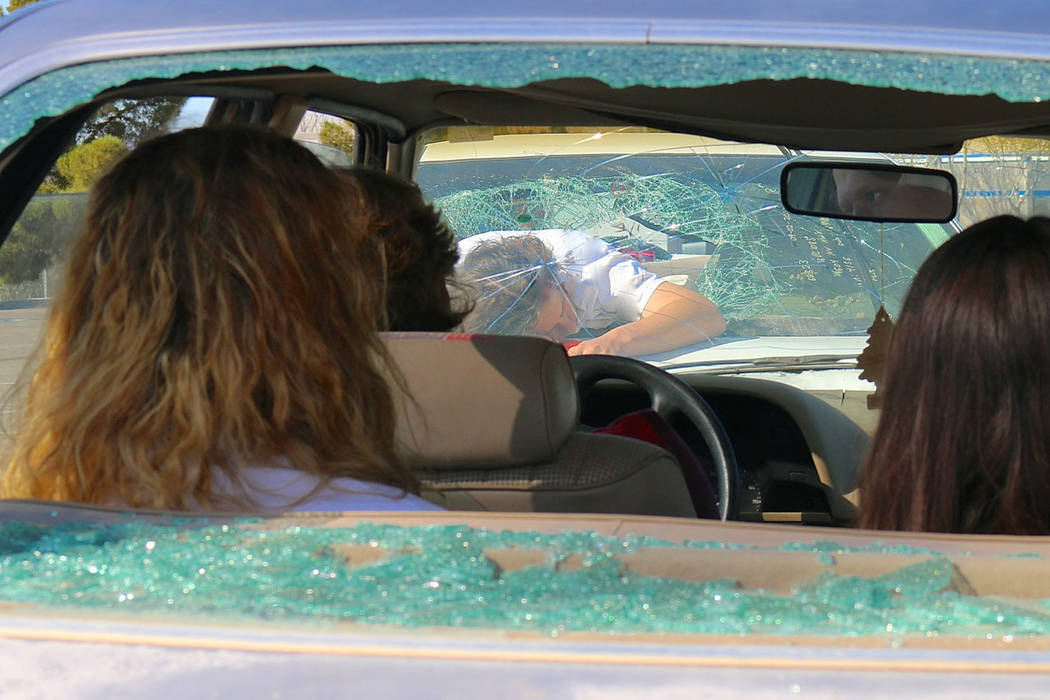 Laura Hubel/Boulder City Review Students participating in Every 15 Minutes at Boulder City High School on March 9, received a realistic view of what it's like to be in a crash caused by a drunk driver. Here, driver Anthony Pacifico gazes out the broken windshield stunned at his friend Shaun Jones who is splayed across the hood of a car which hit them head on. In the back seat in shock are Morgan McKay, left, who called in the accident, and Tori Spinkelink. 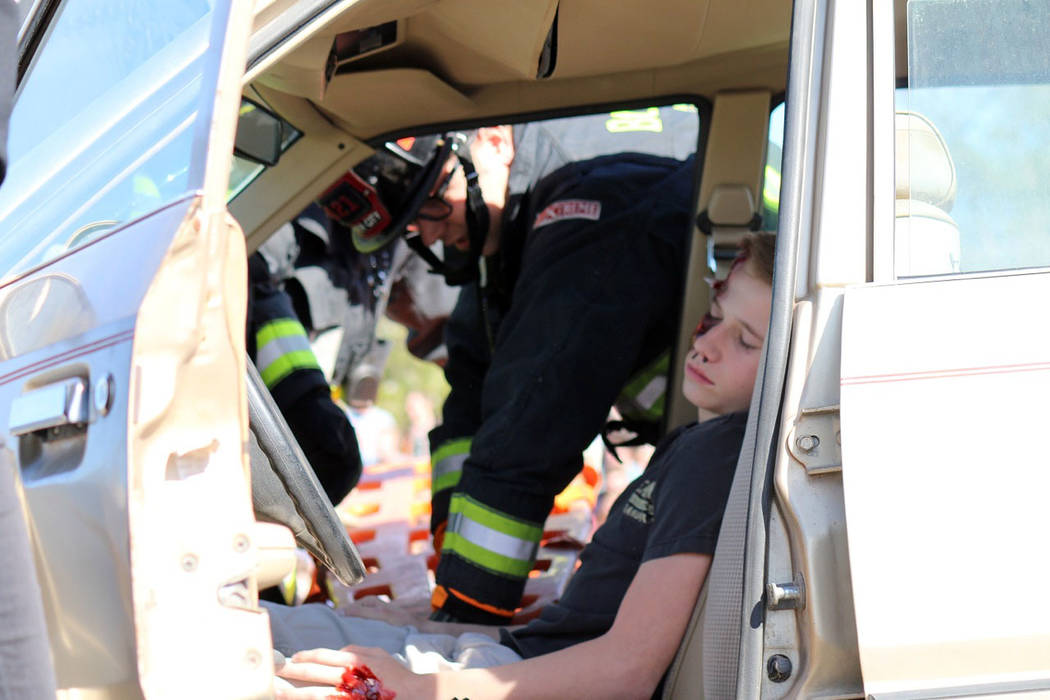 Laura Hubel/Boulder City Review Kenon Cowley, a passenger in the car that was hit by a drunk driver during Boulder City High School's Every 15 Minutes program on March 9 that featured a realistic crash, waits to be tended to by rescue personnel. He was later transported by helicopter to the hospital, where he "died" from his injuries. 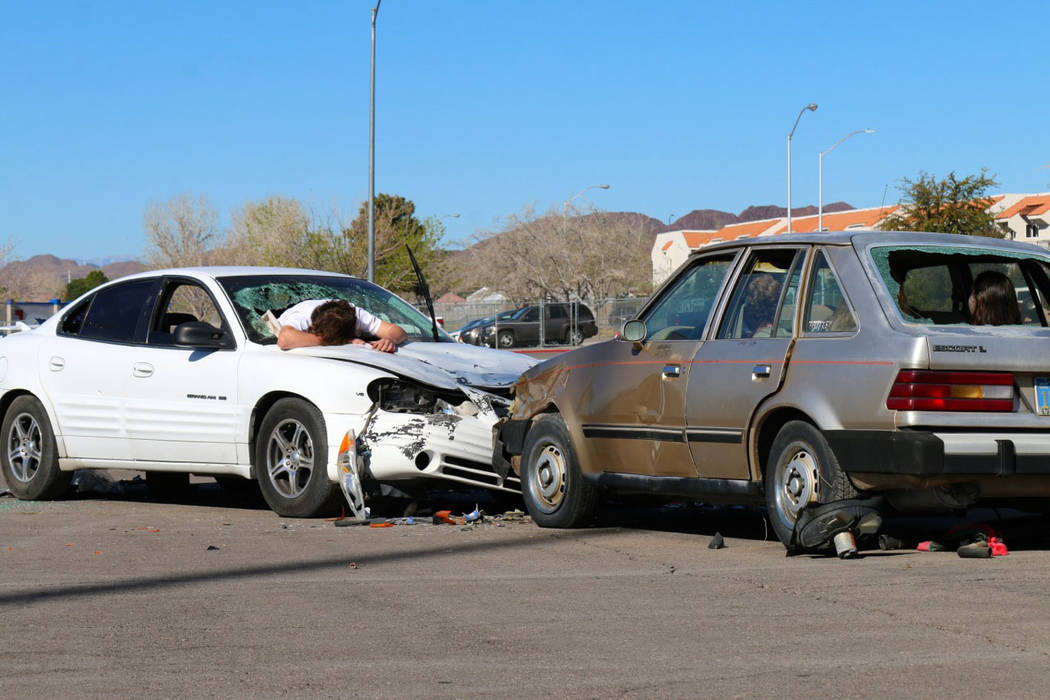 Laura Hubel/Boulder City Review A head-on collision caused by a drunk driver was key to the Every 15 Minutes program presented at Boulder City High School on March 9. Students witnessed their peers being rescued and treated to by first responders at the scene. 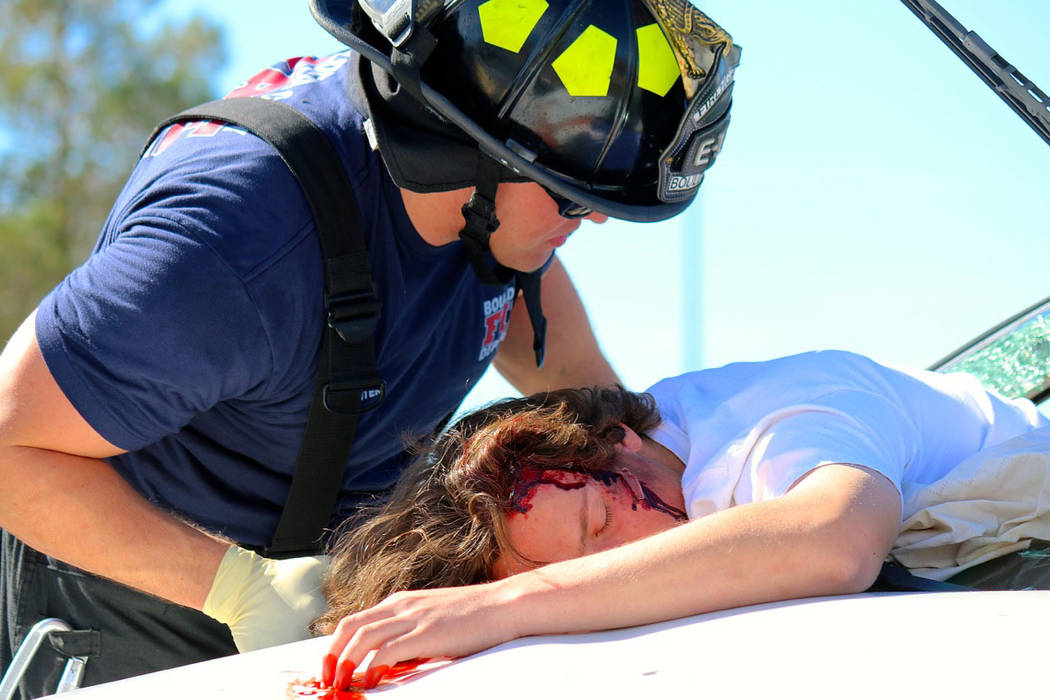 Laura Hubel/Boulder City Review Boulder City Fire Department responded to the scene of a deadly crash as part of the Every 15 Minutes program at Boulder City High School on March 9, 2017. Here, student Shaun Jones died after being thrown through the windshield. 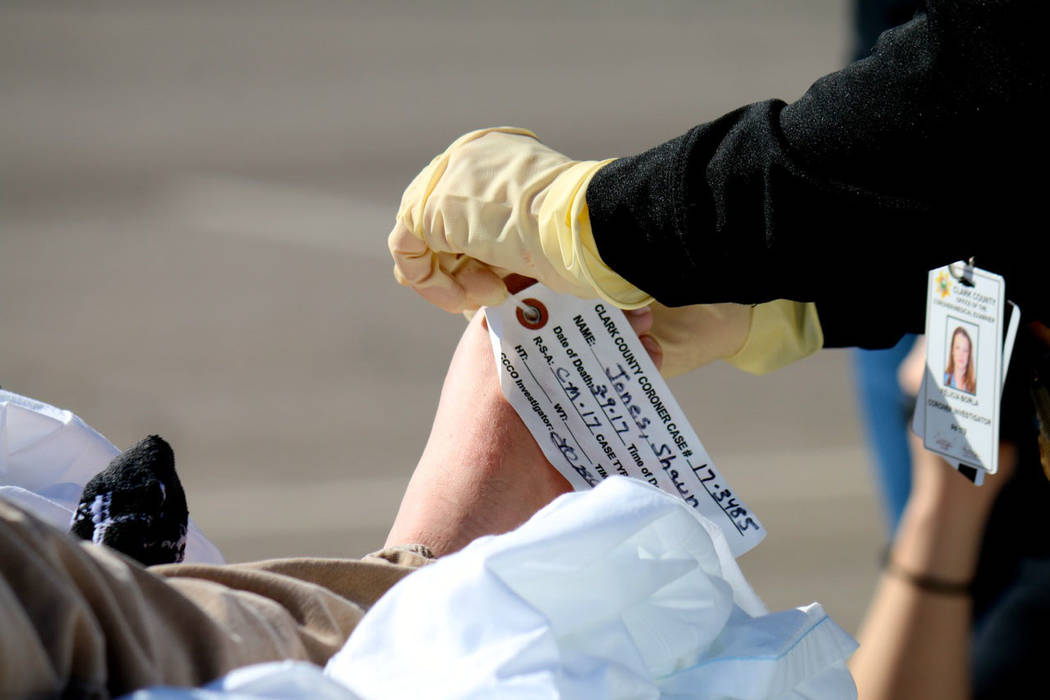 Laura Hubel/Boulder City Review Clark County coroner's office places a toe tag on Boulder City High School student Shaun Jones, who "died" at the scene of a drunk driving crash as part of the school's Every 15 Minutes program on March 9. 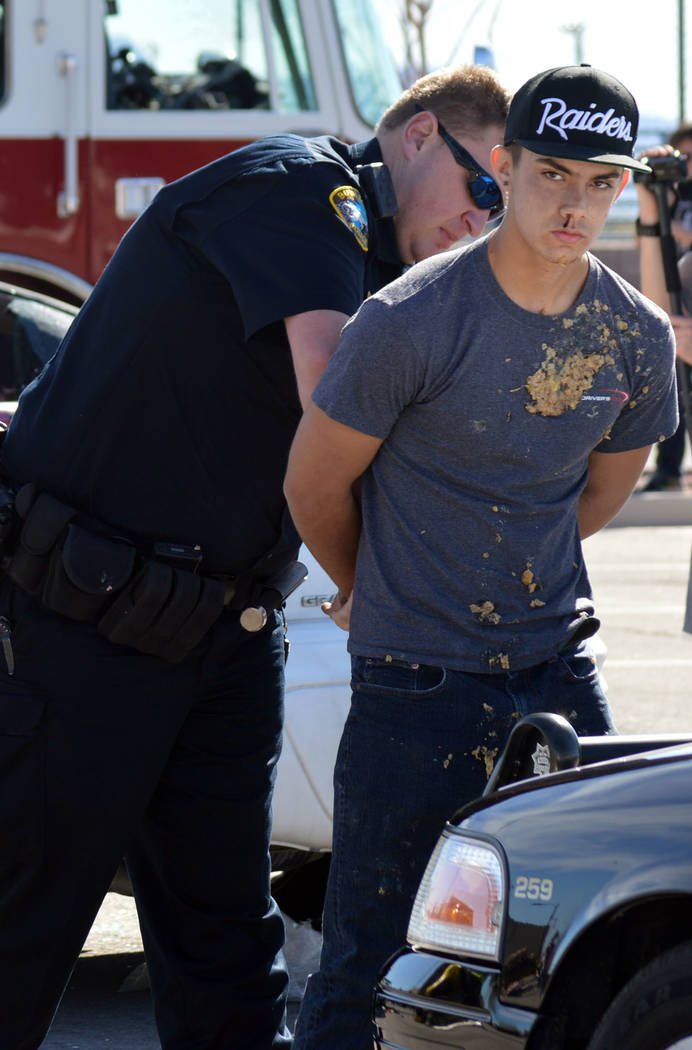 Celia Shortt Goodyear/Boulder City Review Boulder City High School student Vinnie Pacini, the driver of car that caused a head-on collision, is arrested as part of the school's Every 15 Minutes presentation on March 9. 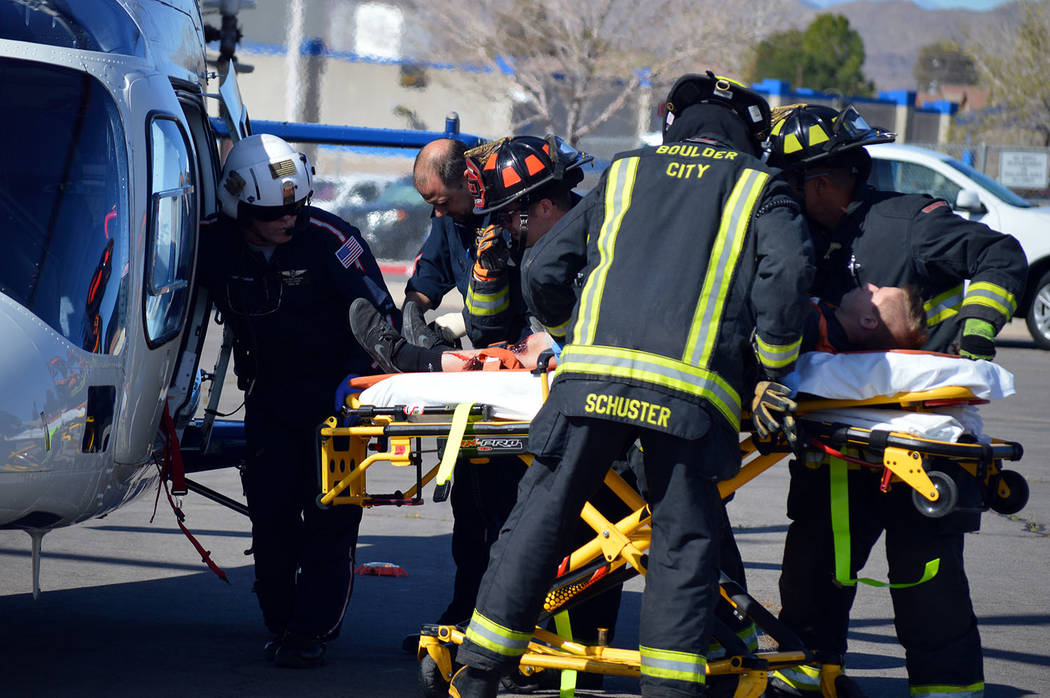 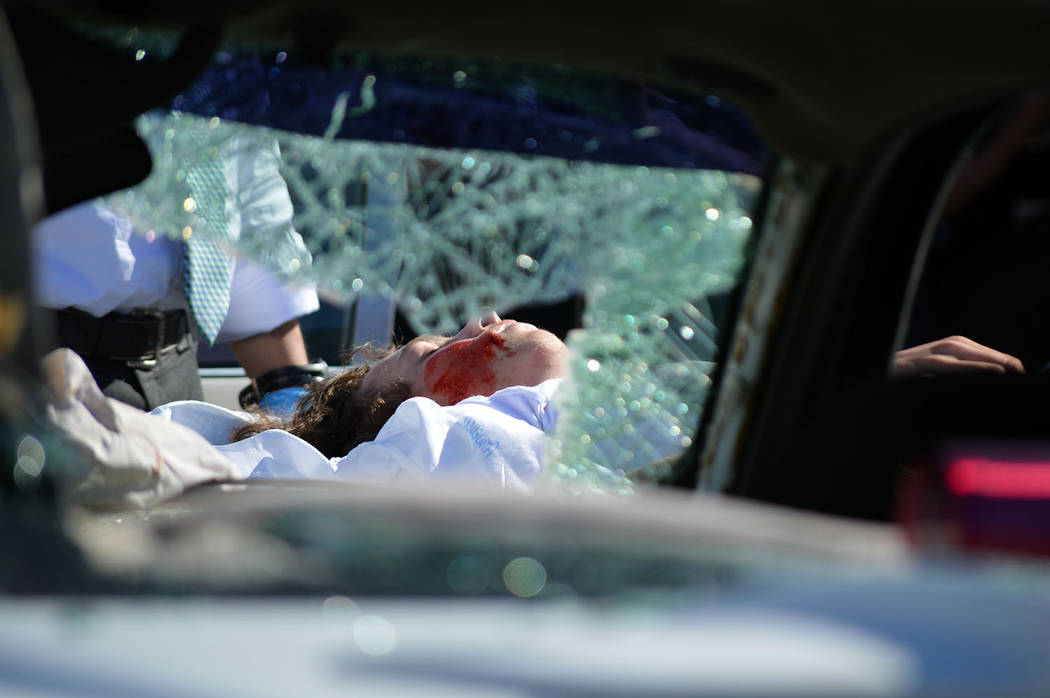 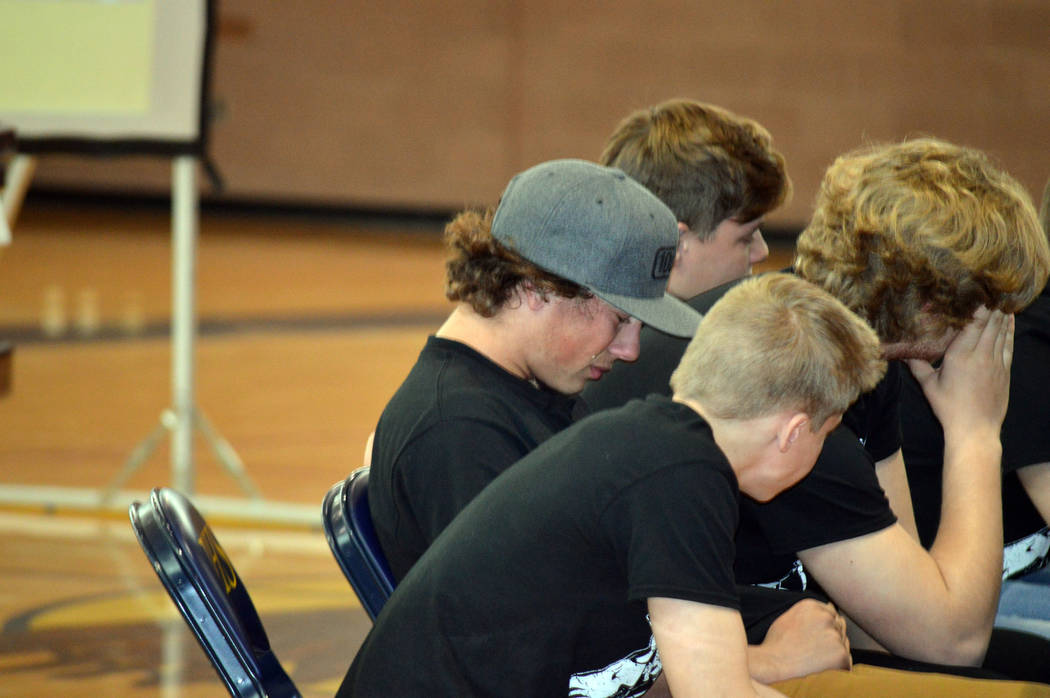 Celia Shortt Goodyear/Boulder City Review Boulder City High School student Shaun Jones, in gray hat, gets emotional as hears his mom read the letter she wrote to him after his "death" during the school's Every 15 Minutes presentation on March 9 and 10.

For Buffie Jones, last week was a difficult one. She watched her son die in a staged drunk driving crash, which was almost as difficult as a real collision that killed her mom and dad 17 years ago.

“They had just left my house that evening to get a gallon of milk,” she said.

Since the crash, Jones has stressed safe driving with her children including son, Shaun, who was part of the Every 15 Minutes presentation at Boulder City School on March 9 and 10.

Every 15 Minutes is a program for high school students that challenges them to think about safe driving, drinking, personal safety and the responsibility of making mature decisions. It stages a car crash with a real response from police, fire department and medical helicopter. Several students involved also “die.”

Shawn was one of those students, and he was dead on arrival from the collision.

He participated in the program because of his parents’ story.

“I know someone who has done it, driven drunk after a party,” he said. “It’s emotional because I hope I can help them change something.”

As a parent involved in the Every 15 Minutes presentation, Jones and her husband, Mike, were visited by a police officer and a minister the morning of the crash, who told them their son had been killed.

“They prepared us,” said Jones. “They told us there would be an officer at the house.”

Despite knowing about the visit beforehand, it was still overwhelming.

“My legs almost felt like they were giving out,” she said. “I was devastated — and I was prepared.”

The kids involved in the crash did not return to the school until the next day during an assembly, which showed a video of the collision, as well as its aftermath — the arrest, charging and sentencing of the driver, the death of their friend, who was airlifted, and the parents being told their children had been in an car crash.

“It was mind-opening on what can actually happen … we take life for granted too much,” said BCHS 10th-grader Kayla Chatwin.

Chatwin was one of the students who participated in the event.

“It was emotional,” added fellow sophomore and participant Morgan McKay. “No matter how smart you are … or involved you are, it can literally happen to anyone. It was mind-blowing.”

Dr. Jim Preddy echoed that sentiment and shared his story after the video.

“We keep coming back because this is preventable,” he told the students. “Either don’t drink or don’t drive.”

In the early 1990s, Preddy was a pizza delivery driver and was almost hit by a drunk driver on the highway. He stopped to help the response crews at the scene.

Preddy described it as a mixture of radiator fluid and blood.

While he was looking over the scene, he found the driver of a car that had been hit by the drunk driver — whom the emergency responders thought was dead — was still alive and helped the crews get him out of the car.

The man he helped save is Ben Hanson, father of BCHS senior Hannah Hanson and BCHS graduate Samantha Hanson. Hanson was in a coma for nine days and spent several years in rehabilitation. He was 19 years old.

“If sharing my story gets to somebody, then I have done my job,” he added.