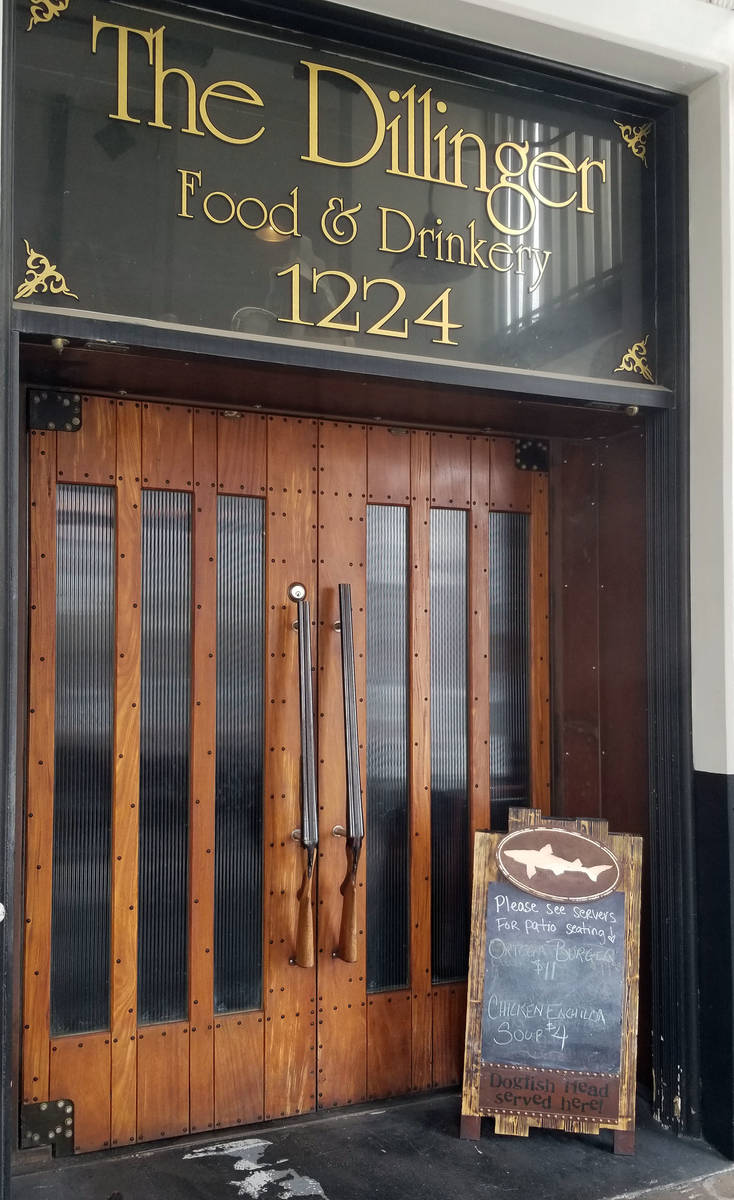 Grant Turner, co-owner of The Dillinger Food and Drinkery, is appealing a citation and fine from Nevada's Office of Occupational Safety and Health Administration for not complying with face mask mandates for employees.

Stress, uncertainty and higher costs are what some local restaurants are facing during the current pandemic.

“Being a restaurant worker is one of the hardest jobs there is, and it’s making it even harder,” said Terry Stevens, co-owner of The World Famous Coffee Cup Cafe about the restrictions brought on by COVID-19.

Recently, Gov. Steve Sisolak mandated restaurants operate at 50 percent capacity and close their bar areas. Customers can still be served alcohol if sitting at a table. He also required everyone in public to wear a mask.

Stevens said keeping his business operating with those restrictions is stressful because they mean less hours and tips for employees and less revenue for the business. He also said his family has had to hire an attorney to help navigate through everything.

“It’s costing us more money,” he said. “Everything about the restaurant is twice as hard as usual, and it’s already a difficult business.”

He said their customers are what is getting them through this difficult time and that the local police department and code enforcement have been “amazing,” but he is still worried about people making false reports about noncompliance that could get forwarded to Nevada’s Occupational Safety and Health Administration.

BC Dam Tacos owner Rolando Medrano said he is also worried about getting fined from OSHA.

“Last week, on Monday, an officer said he had to come by because someone had reported we weren’t wearing masks,” he said. “Then on Friday, my wife said two police cars came by and stopped in the middle of the road. I don’t fault them at all. It’s coming from the top down. … If I get a fine, I will have to lay off my employees.”

He said in order to properly and safely follow the mask mandate and capacity rules, he moved his outside dining tables farther apart and has more staff working during the day so he can rotate them out of the trailer to cool down.

He also has an air conditioner and a swamp cooler running to make things as cool as possible.

He added that he has “no quarrel” with the local police and that operating his taco trailer has been difficult since he had to close at the start of the pandemic. When it did reopen, Medrano said the business dropped 50 percent and he started opening Sundays to help boost his income.

Grant Turner, co-owner of The Dillinger Food and Drinkery and The Tap, also said he is having a difficult and stressful time operating his restaurants.

On July 20, Nevada OSHA issued The Dillinger a $4,858 fine because all of Turner’s employees were not wearing masks or social distancing.

Turner said an OSHA inspector came to the restaurant June 17 and told him about the problems, which Turner said he remedied right away. Additionally, he said his employee was not wearing a mask due to having asthma, which, according to the Centers for Disease Control and Prevention, is permitted.

According to Directive 024 issued by Sisolak on June 24, the mandate to wear masks does not apply to those individuals who cannot wear one due to a medical condition or disability. It does, however, require businesses to follow the guidelines issued by OSHA.

According to the OSHA complaint file, Boulder City Fire Chief William Gray contacted the agency about The Dillinger.

In the referral email, Gray wrote that the restaurant was “refusing to follow the governor’s directive” about employee social distancing and mask wearing. Gray is also the city’s emergency incident commander.

He wrote that members of the police department and code enforcement had visited the restaurant several times, but it still was not complying. Additionally, there had been some complaints about it from the community.

According to Gray, the city has an “obligation to respond appropriately to violations of the governor’s emergency directives” and that they were told by other governmental agencies to forward the complaints.

“On numerous occasions over the past three months, residents and nonresidents have contacted the city of Boulder City, Clark County business licensing and Nevada OSHA with facial covering noncompliance complaints regarding several businesses,” he said. “We have sent staff to those businesses for an educational visit and to issue appropriate warnings. After several businesses were found to violate directives on numerous occasions without taking corrective actions, the county and state told the city to contact OSHA for a continuing violation investigation under the governor’s directives.”

“Early on, the city was proactive in educating business owners of the constantly changing rules,” Turner said. “However, in the process of appealing the … fine … I learned that the city was responsible for referring OSHA to my business. Furthermore, when I confronted the city on this fact, they lied and denied responsibility.”

Turner said he was not told that those visits could be forwarded to OSHA.

According to Communications Manager Lisa LaPlante, staff is looking at the city’s codes to determine how to best use the existing ordinances to assist with enforcement.

“We will continue to communicate with businesses to make sure they know the state directives and the potential penalties for noncompliance,” she said.

Turner’s other restaurant, The Tap, received an OSHA citation Monday and $4,858 dollar fine for holding karaoke.

“The most recent Boulder City business complaint/investigation conducted by OSHA did not involve city staff, nor were they aware of it,” Gray said.

Turner said he plans to appeal that fine as well as The Dillinger’s because all the violations were fixed immediately and he did not receive a warning visit from OSHA before being given the citation for either instance. He said he was told that is OSHA’s process for first-time violations.