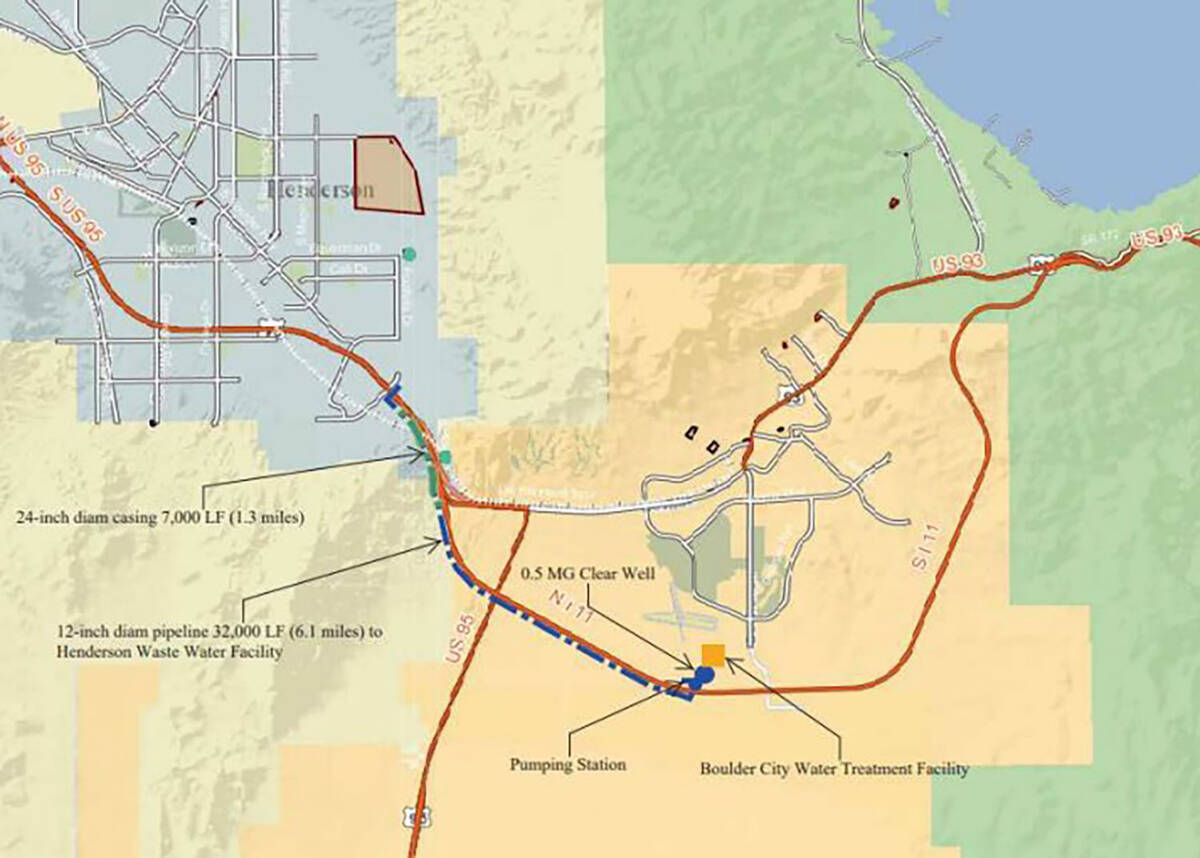 (Photo courtesy of Boulder City) The Southern Nevada Water Authority recommended two potential routes for Boulder City to recycle its water. This map shows Option A, which would filer wastewater in Henderson and transfer it back into Lake Mead. 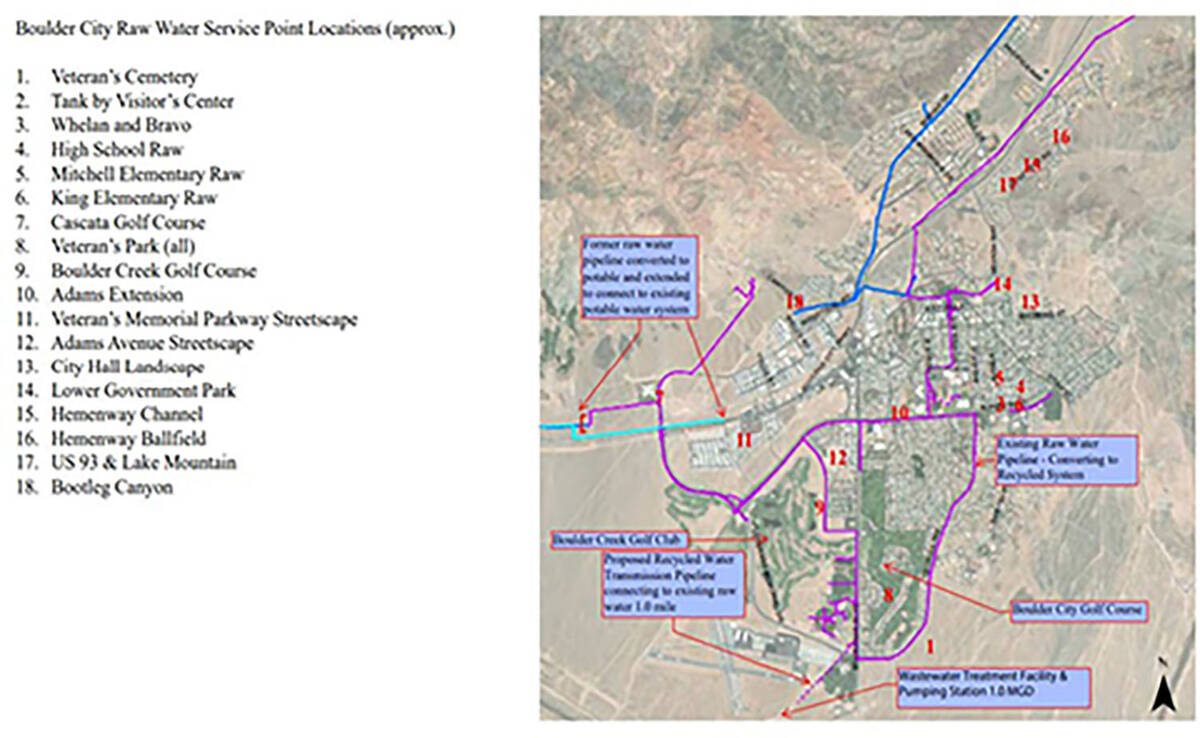 (Photo courtesy of Boulder City) The Southern Nevada Water Authority recommended two potential routes for Boulder City to recycle its water. This map shows Option B, which would recycle water directly back into Boulder City's supply.

SNWA also gave a presentation to the council regarding recycling used water.

Nearly 721,00 square feet of irrigated turf will be cut back to save on water. It is estimated that 55 gallons of water are saved per square foot. Most of the turf that will be removed is at the Boulder City Golf Course outside of the general play areas.

“This is just one small step and piece in a very large puzzle. These things do take time; I understand that there is a desire for us to get moving, and I think everyone else here has that desire. We are working with SNWA to make sure that the efforts that we make are valuable ones,” said Councilman James Howard Adams.

In a presentation to council members, Doa Ross, SNWA’s deputy manager, spoke about the ongoing water concerns that Southern Nevada is facing. The topic of recycling wastewater was discussed in great detail, as Boulder City is the only municipality in Southern Nevada that does not do this.

Instead, Boulder City takes its nearly 300 million gallons of wastewater per year and lets it evaporate out in the Mojave Desert.

“This has obviously been a topic for quite some time. We know that water runs out into the desert and that there has been a riparian area that has been created because of that,” said Mayor Kiernan McManus.

Ross shared some enlightening information on the current situation at Lake Mead as water levels are projected to drop below 900 feet. If this happens, the Hoover Dam will not be able to generate power and release water downstream to California, Arizona and Mexico.

“It is looking, based on current hydrologic models, that we will be at or bouncing around dead pool by the end of 2025,” said Ross.

Two plans for recycling water were proposed by Ross and SNWA. The difference between the two plans is simply where the water will be returned to. Boulder City has the option to return water directly into Lake Mead or to recycle water back into the city’s water supply.

The option of returning recycled water to Lake Mead would require negotiations with the city of Henderson as the water would need to be filtered through its wastewater treatment facility.

Ross also stated multiple times in her presentation that SNWA would be willing to help Boulder City financially with construction costs for this water retrieval line project.

“SNWA is committed to assisting with all of these costs, whichever option is chosen,” she said.

Still, McManus brought about his concerns with finances to SNWA and the council.

“My concern is that the push continues to be for this retrieval line, but we don’t know what these dollars and cents are. I have a real concern of getting hooked up into a system that is going against the growth policies that have been in this community for over 40 years,” he said.

Councilwoman Claudia Bridges urged the council to take action. She mentioned how they have been talking about this plan for the past three years and, in that time, thousands of gallons of water have been sent out to the desert to evaporate.

“We could have been building something so that we weren’t putting all that water into evaporation. It just makes me unhappy that we have been doing this. We have to drastically cut our water usage, and we have been talking about it and talking about it. We use the threats of growth and the issues of keeping our rates low, but in the meantime, we are in a significant drought and we are the only Southern Nevada municipality that doesn’t reuse or recycle its wastewater. That is a shame. That is horrible,” said Bridges.

Council member Matt Fox was not present at the meeting.