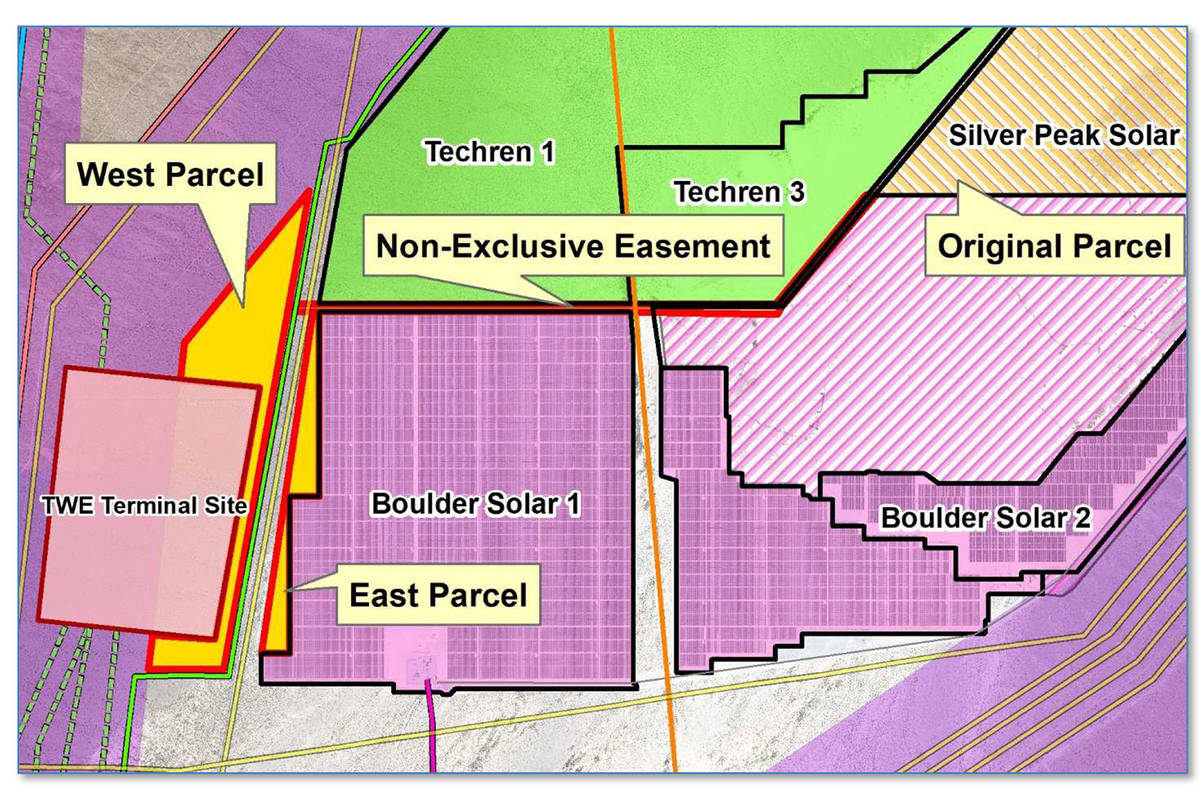 At Tuesday’s, Sept. 22, council meeting, Finance Director Diane Pelletier said Silver Peak was asking for approximately 66 acres to be added to its existing option agreement of 276 acres in the Eldorado Valley.

“This maximizes city land use since these are small parcels among solar-leased land. … It’s land that we probably couldn’t use for anything else and they want to lease it,” she said.

The increased acreage will bring in $31,930 to the city for the 2021 calendar year. The newly optioned land also includes almost 8½ acres of nonexclusive access easements.

“It’s bounded on one side by the Boulder Solar Phase 1 project, on the other side by the TransWest Express substation site as well as the existing transmission lines in that immediate vicinity,” said Brok Armantrout, Boulder City’s contracts/real estate manager.

During the council’s discussion, Councilwoman Tracy Folda expressed concern about language in the lease that allows for renewal options.

Like the other solar leases, this one with Silver Peak is for 30 years with two additional 10-year options and features language saying “the term of the lease may also be extended by the written agreement of the parties.”

“Fifty years from now how are they going to deal with this?” Folda asked. “That sentence kind of says you do have two 10-year (options), then you can also do something more if you want.”

Armantrout said even if that language was removed from the agreement, the parties could still come to an agreement for other renewal options.

“I just wanted to bring that to the attention (of the council) that 50 years from now, they are going to be dealing with the same thing that we did with the similar lease,” Folda said.

Councilwoman Claudia Bridges asked if she meant the airport hangar leases, and Folda said she did.

“There is no wording here that says after so long that this reverts back to the city,” Bridges said.

Council approved the updated lease option in a 5-0 vote.

Council also directed staff to research setting aside capital improvement project and Redevelopment Agency funds for the 2022 fiscal year to provide money to match a grant to rehabilitate the old water filtration plant at 300 Railroad Ave.

According to the staff report, the Historic Preservation Committee wants to apply for a Commission for Cultural Centers and Historic Preservation Grant for the project. Stantec’s facilities recommendations study estimated the design and work to cost $500,000. Community Development Director Michael Mays said more consideration is given to entities that have set aside funds for a certain project.

Additionally, council directed staff to write a resolution to create an ad hoc committee for the Historic Preservation Committee that would include two City Council members. It would meet monthly to discuss adopting changes to the city’s historic preservation ordinance.

“I think it’s a good endeavour for us because I think it’s something that we’ve been needing to do for quite some time,” said Councilman James Howard Adams.

The other council members agreed and unanimously approved the direction to staff.