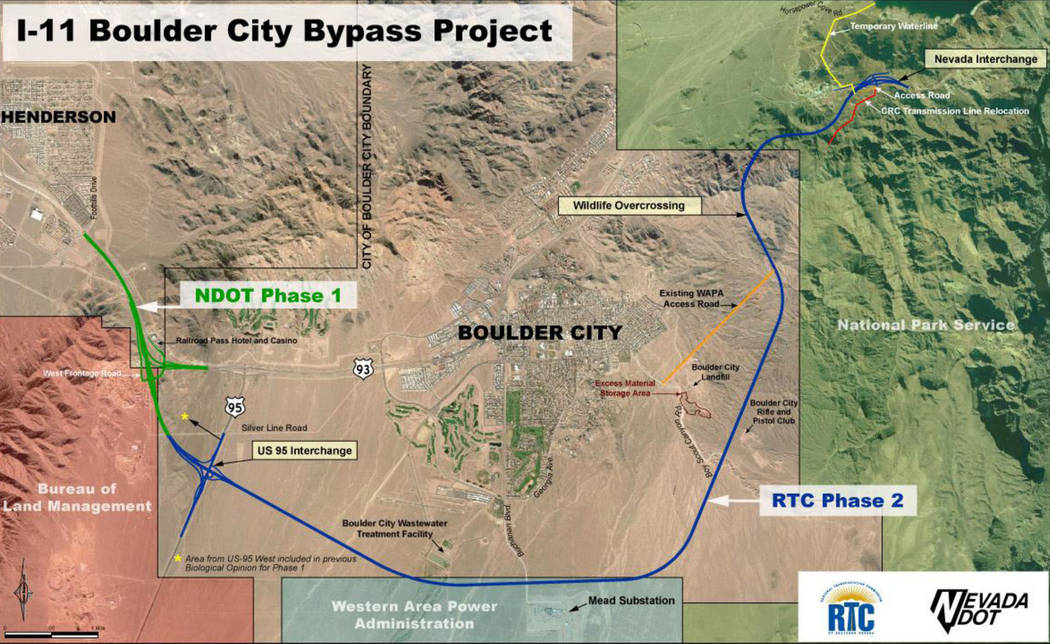 Courtesy City officials plan to put a question on the ballot asking residents their opinions on an exit at Buchanan Boulevard from Interstate 11.

The City Council approved a polarizing ballot question for the 2017 municipal election about changing the controlled growth ordinance in a four to one vote at its meeting on Tuesday.

The question seeks the community’s approval to remove cap of 30 homes per developer, but keep the 120 total home limit the same and allocating 20 units per year for smaller projects.

Originally, the question was to be posed as an advisory issue only, but if approved, it would not be binding on the council’s actions. They described an advisory question as nothing more than an “expensive poll.”

“It eliminates some of the steps, and makes it easier for developers to get out here,” said City Attorney Dave Olsen.

“After discussion with the mayor, he concluded that an advisory question would lead to an extra step for the voters,” he added after the meeting. “Rather than getting their opinion, we should just have them decide.”

According to the question, a yes vote would adopt an ordinance amending the controlled growth management plan to allow developers the opportunity to seek more than 30 allotments in a construction year and provide for 20 allotments to be reserved for small developments. A no vote would leave the Controlled Growth Management Plan unchanged.

Several council members disagreed with the timing of changing the question as they had expected it to be an advisory question.

“I think there needs to be more discussion on it,” said Councilman Rich Shuman, who voted against the question.

Councilwoman Peggy Leavitt also disagreed with the timing but she did suggest that the council could educate the public on the question and its implications in the two and a half months until the election.

“I don’t think there’s any difference with this being an advisory question or an amendment question because the end result is the same,” said Councilman Duncan McCoy.

“I appreciate we’re going to the voters, but the audience hasn’t even seen it,” said Councilman Cam Walker. Walker also suggested have a special meeting so other people could view it.

After the meeting, Mayor Rod Woodbury offered more detailed reasons on why he wanted to change the status of the question.

“At our Feb. 28 council meeting, Councilman Walker asked whether an ordinance that was created by the voters could be changed by an advisory question or instead only by a binding yes-no question,” he said in an email. “Accordingly, at the same meeting, we instructed City Attorney Dave Olsen to consider that issue in determining whether to recommend going forward with one type of question or the other.”

After analyzing the issue and discussing it with Woodbury and others, Olsen determined that either option could work but there would be more risks and possible drawbacks if the council went forward with an advisory question.

After the meeting a question arose of whether a change making the question a yes-no binding one rather than advisory was allowed through the open meeting law since it had not been available to the public beforehand.

“The open meeting law doesn’t affect that,” Olsen said. “We provided amendments on the floor of the meeting … As soon as we had it (the revisions) available, we presented it.”

City Council’s approval means that as of right now, it is going forward.

According to City Clerk Lorene Krumm, the council could withdraw the question but it would have to come in the next few meetings.

■ Approved a second ballot question. This one is an advisory question asking the voters if a full-service interchange should be constructed at the intersection of Buchanan Boulevard and Interstate 11. Council did approve adding language that would allow the city to pursue funding from other sources.

■ Introduced a resolution that would allow the city to sell .31 acres at 1321 Alpine Drive to the Herman Family Trust.

■ Approved a resolution that distributes funding for Lend A Hand of Boulder City and Emergency Aid through the Community Development Block Grant program.

■ Introduced a resolution for the municipal airport to clarify the designation of supervision of duties by the city manager. This bill will be considered at the March 28 meeting.

■ Introduced a resolution that would add a new section to the city code for sterilization requirements for animals. This issue will be considered at the March 28 meeting.