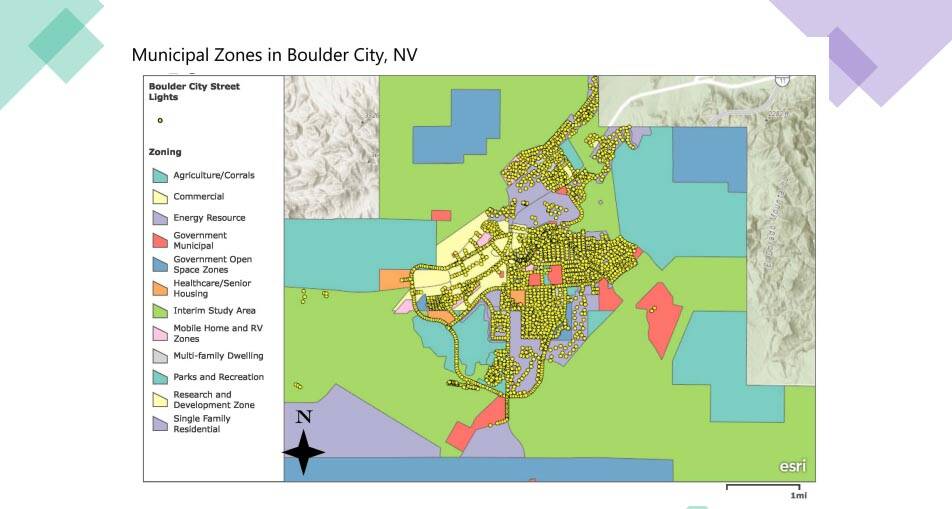 (Boulder City) This map shows the location of the light fixtures in Boulder City that would need to be retrofitted to help obtain the dark sky designation.

The program, which was discussed during Monday’s, June 13, City Council meeting, was put together to advance tourism and outdoor recreation economies by removing light pollution. State Bill 52, which was introduced to the Legislature Nov. 18, 2020, requires a program be established in order to award a dark sky designation to a particular place.

Boulder City has been conditionally awarded a $2 million grant through the NDOR with the help of the Economics Development Agency. If the city is formally awarded the grant, it will help pay for all of the equipment needed in order for the city to get the dark sky designation.

Part of the retrofitting would involve changing the city’s lights to provide more shielding of the cone of light coming from the fixtures. This will help reduce the amount of artificial light sent into the sky and focus the light toward the intended area.

Another way the light fixtures can — and will — be improved is through the use of dimmers and timers. Using these will help reduce the amount of electricity used, thus being financially friendly for the town.

The grant may only be used to purchase equipment needed to be dark sky-friendly, requiring Boulder City to pay for the labor during the replacement process.

“The Economic Development representative for Nevada is very — she’s quite impressed by this application and the opportunity,” said Colin Robertson, administrator of NDOR. “…part of the reason for it being moved to this next stage has to do with the idea being something that could be replicated in other communities to advance their tourism and recreation economies through similar kinds of investments.”

Councilwoman Claudia Bridges shared a personal experience about how the shielding of lights benefited her and helped her and her husband see the stars in the sky while they were out walking their dog.

Despite being in favor of making a change to the lighting fixtures, Councilwoman Sherri Jorgensen did voice her concerns regarding the cost of the lights due to the current rate of inflation. The total cost would be in the neighborhood of $347,000.

The council has received a draft for an ordinance regarding lights around the city, however, it is still getting direction to see what works best for the community.

In the meantime, members voted unanimously to approve Councilman James Howard Adams’ motion for the city to move forward with a comprehensive night sky ordinance that meets the minimum requirements to get the designation of a night sky friendly city under state law and to meet the necessary requirements for Boulder City to receive the grant.