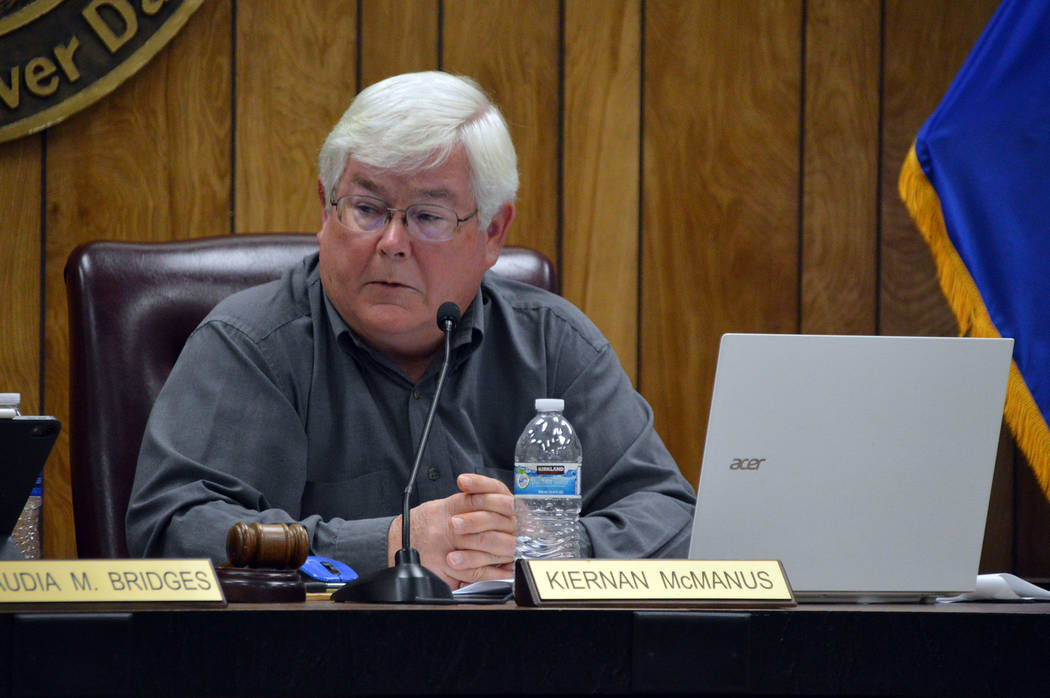 In a divided vote City Council went against the recommendation of City Attorney Steve Morris at its meeting Tuesday, Oct. 22, and could face an open meeting law violation for including an item on the agenda.

The item was for discussion and a possible staff directive about hiring an outside attorney to review and advise council members on Nevada’s open meeting law; the employment contracts of the city attorney, city clerk, city manager and municipal judge; and other issues as determined by a majority of council.

Morris recommended the item be removed from the agenda because it lacked the specificity required and that council could face an open meeting law violation because of it.

“I have an ongoing obligation, Mr. Mayor, to protect the council from possible open meeting law violations,” Morris said. “I can’t possibly determine whether or not a conflict has occurred without the specificity that is required by the open meeting law … that is not found in item 18.”

Morris also said that the open meeting law, city charter and state law were implicated through the situation.

The lack of information in the “other issues” portion of the item also raised concern from several residents, who spoke during the public comment session before the agenda was approved.

“This part of tonight’s agenda language is too vague to be useful in any public agency’s agenda,” said Duncan McCoy, a former City Councilman. “This is rather like ‘other new business’ and not descriptive of what the council’s conversation will cover. Again, go back and look at how the attorney general’s office has ruled in previous cases on vague agenda language.”

“You don’t really tell us what you’re going to look into … . You only give a few things and after that (it’s) whatever we decide,” he said. “That’s pretty open in my opinion and I think that needs to be narrowed down.”

Resident, former mayor and former councilman Rod Woodbury also expressed a concern that “other issues” was too vague.

Mayor Kiernan McManus disagreed with Morris and said he would not remove the item from the agenda.

“I’ve requested item 18,” he said. “I have spelled out my reasoning for doing so. I will go into further detail on that as we get into that item tonight and therefore will not be removing the item from the agenda.”

Council approved keeping the item on the agenda 3-1, with Councilman James Howard Adams voting against it.

Councilwoman Claudia Bridges said she did not vote to remove the item from the agenda because she wanted to express her opinions about it.

During the discussion about hiring outside counsel, McManus said he believed Morris had a “tremendous amount of conflict of interest and was inappropriate” in asking for the agenda item to be removed prior to having it heard by council or them commenting about it.

McManus said the agenda item may have an impact on the employment contracts for municipal officers including Morris’ and that because of that conflict of interest, Morris should have recused himself.

“I think you have a substantial conflict of interest by weighing in on an issue that has regards to your contract for employment. That’s one of the reasons why I’m going forward with this and not taking your recommendation as far as removing the item,” he said repeating his desire to hire an outside attorney.

With the “other items” language, McManus said he wrote it that way because he did not know what other council members would like to do and because of the open meeting law they could not deliberate about reasons for retaining special counsel before the meeting.

Concerns about its vagueness, however, caused him to withdraw any discussion about “other issues.”

He said he thought special counsel should be hired so that council members could have additional legal advice about the open meeting law as well as a third party to look at the employment contracts.

“I’m not trying to point fingers at anyone,” McManus said. “I’m just saying that with the staff we currently have, I believe we have the ability and the need to have another attorney we can ask questions from.”

Councilwoman Tracy Folda agreed with McManus about the need to retain special counsel because the city attorney was unable to perform his duty when reviewing his own contract.

Bridges said she did not believe there was a need for special counsel to be hired to go over the open meeting law and that she trusted city staff.

The vote ended in a tie, with Adams and Bridges voting against hiring a special counsel and McManus and Folda voting for it. Since it was a tie, the motion died.