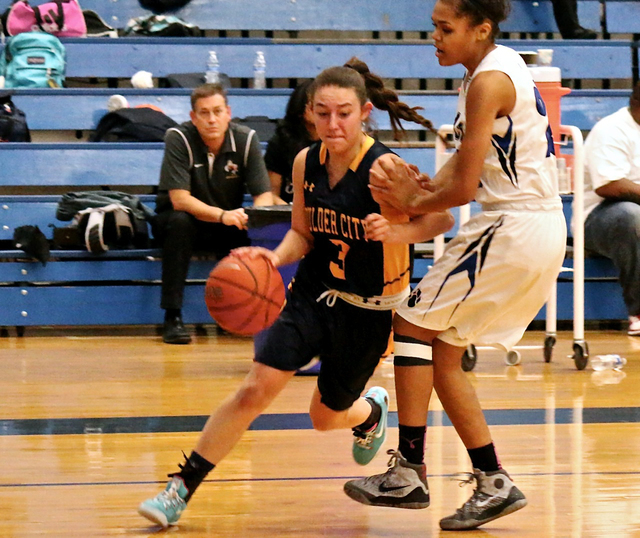 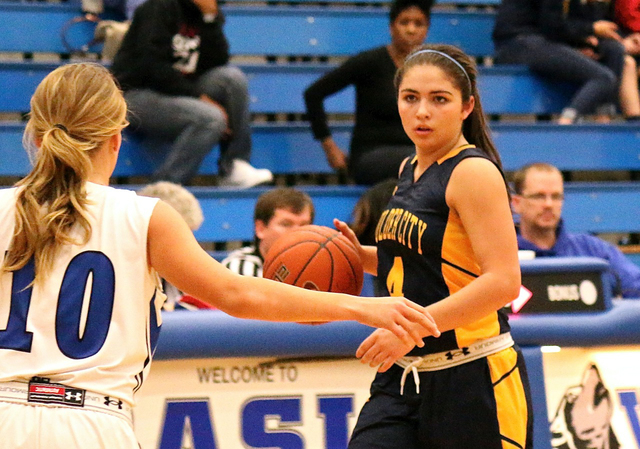 The basketball guard tandem of Alyssa Ybarra and Katlyn Daly has been 11 years in the making.

It began as opponents in little league, grew as teammates in middle school and has flourished on the Boulder City girls basketball varsity team for four seasons.

Ybarra and Daly became friends in elementary school where they competed together and against each other in the Boulder City Parks and Recreation leagues before teaming up permanently in sixth grade at Garrett Junior High.

They have been the starting backcourt ever since.

They like to say that Daly is the ball-handler and Ybarra is the shooter, but both are equally capable. On any given night, either one can be the team’s leading scorer or the key play-maker. Both play tenacious defense.

“This makes seven straight years for us as the starting backcourt for our team, but we also played together while in elementary so you could say we have been doing this for almost a dozen years,” Daly said. “I see her more than I see my own family.”

What Daly sees the best is the court, evidenced in a recent game when she made a no-look pass to the corner that appeared to be headed out of bounds. That’s because only two players on the court knew where that pass was headed.

Without so much as a look, Daly fired the ball off. Cutting along the baseline from a pack of defenders, Ybarra appeared to grab the ball. She turned toward the basket and sank the 3-point shot.

“It’s like that between us,” Ybarra said. “She knows what I am going to do and I know what she is going to do and we don’t have to talk or signal. We have been playing together for so long that we have radar for each other.

“Our ability to know each other so well helps us be better players and helps our game. We have also been lucky to have great teammates.”

The pair has thrived even as the Boulder City varsity team changed head coaches three times in their first three years. They made the transition from Garrett along with coach Kate Elles. In their three years at Garrett and one year at Boulder City with coach Elles, they won more than 100 games.

Elles later resigned and Kirk Frantz stepped in during their sophomore year, leading the Lady Eagles to the league championship and a berth in the state’s final four. Last year, Paul Dosch took over the program and the team claimed another Sunrise League championship. Boulder City reached the state championship game and held the lead in the second half before losing.

“We are hoping to end our high school career together in the state tournament holding the championship trophy,” Daly said. “We know we have a lot of work to do to make that happen, but I would love nothing more than to be able to get that championship ring for Alyssa.”

Last year, Ybarra was a key player in three sports as the Lady Eagles reached the state tournament in volleyball, basketball and softball. The basketball team got the closest to the championship ring.

“We still have half the league season to complete and work on things to improve, but we have goals to win the league, the region and the state,” Ybarra said. “It would be a great ending to our careers but we know we have to do it as a team. We have a great group of teammates this year and if we all come together, we can do it.”

Boulder City defeated Sunrise Mountain 61-23 in its final league game before the holiday break to improve to 3-0. The Lady Eagles are 9-5 overall as they resume their Sunrise League schedule on Jan. 8 at Desert Pines. They play at home on Jan. 9 against Moapa Valley.

On Saturday, Boulder City defeated Elsinore (Calif.) 47-31 as Ybarra scored 16 points in the Nighthawk Classic at Murrieta Valley, Calif. Morton added 12 points in a game in which the Lady Eagles led 39-21 after three quarters. It was a good win after a 61-38 loss Friday in the opening round to Rosary (Calif.). Morton scored 11 points.