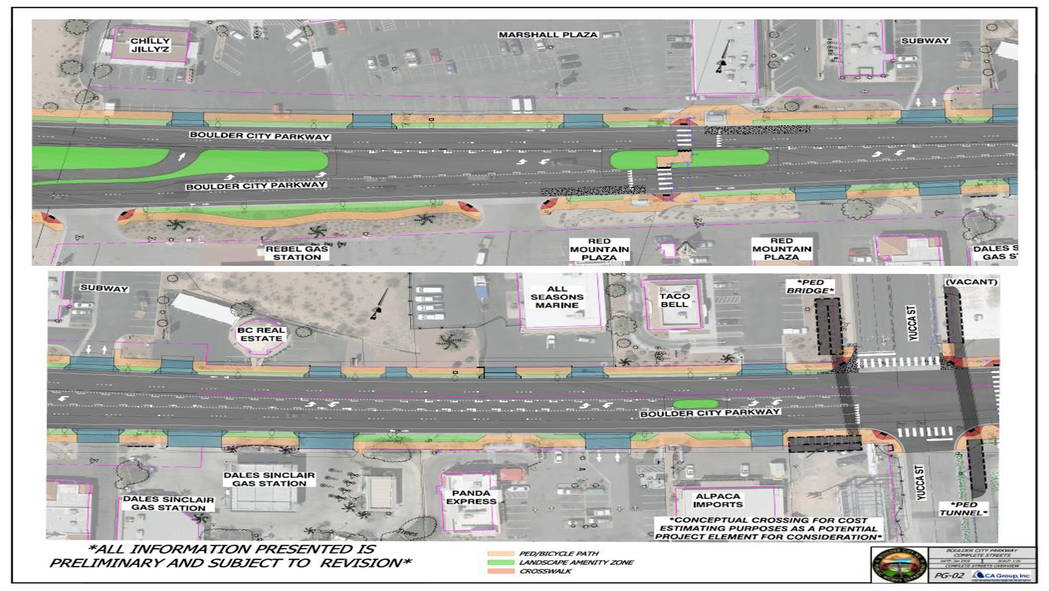 Construction on the Boulder City Parkway complete streets project is expected to start in February.

The start of the new year Tuesday puts several projects and issues on the horizon for Boulder City residents. Here are a few to watch for.

Construction is expected to start in February for the complete street project to beautify and improve Boulder City Parkway.

According to Boulder City Communications Manager Lisa LaPlante, the goal is to deliver a construction contract to the City Council in January, with work potentially starting in February and continuing for 12 months.

At its June 26 meeting, council members approved an agreement with the Regional Transportation Commission of Southern Nevada for almost $11 million to fund the project. This is in addition to the $1.5 million the RTC has already given the city to design the project, making its total contribution $12.4 million.

According to city documents, construction for the project is estimated to cost $11 million, and the engineering costs will total $1.4 million.

Despite many residents speaking against it, Boulder City will get overhead power lines along the northeastern end of Nevada Way to create a backup power system for that part of town.

In August, the council chose not to exercise an option for a partial underground line for its 69kV transmission loop project, which provides a backup for distribution substations 1, 4 and 6. The underground portion would have cost an extra $1.4 million to install.

Construction is anticipated to begin this summer after the design is completed and materials are delivered, according to LaPlante.

Residents have begun a grassroots effort to create a special improvement district and raise the money needed to put the power lines underground. They are still raising money for that effort.

The City Council took another step toward building a new pool by instructing the city attorney to draft language for a 2019 ballot question to seek $40 million in general obligation bonds to pay for the project.

City Engineer Jim Keane said the community-preferred option had program and competition pools, a fitness center, locker rooms, racquetball courts, a meeting room and an outdoor family pool. It is estimated to cost approximately $30 million now, but officials are asking for $40 million to allow for inflation. He also said operating and maintaining the aquatic center would cost $650,000 a year.

It costs $540,000 year to operate and maintain the current pool, according to Parks and Recreation Director Roger Hall.

Finance Director Diane Pelletier recommended general obligation bonds to pay for the new facility because they had the lowest interest rate. She also told the council it could offer a modified version of that bond.

Either option would require the city to obtain voter approval for $40 million, but the modified version would allow for the amount to be combined with other funds, reducing how much needed to be borrowed.

The bond issue could also bring a property tax increase. As an example, Pelletier said a home in the Del Prado area would see an increase of approximately $182.93 a year.

For the past year and a half, residents and business owners have supported the idea of a trail system in town for off-road vehicles that would have access points to the desert from city streets and allow riders to travel through town on off-highway vehicles.

According to the Nevada Revised Statutes, large all-terrain vehicles may operate on portions of a highway that have been designated as a general or minor county road. Designating those roads is up to the municipalities.

City staff began researching the possibility of establishing a trail system after a public meeting attended by more than 150 people. City Attorney Steve Morris was instructed by the council to draft an advisory question for the June election about OHV use on city streets.