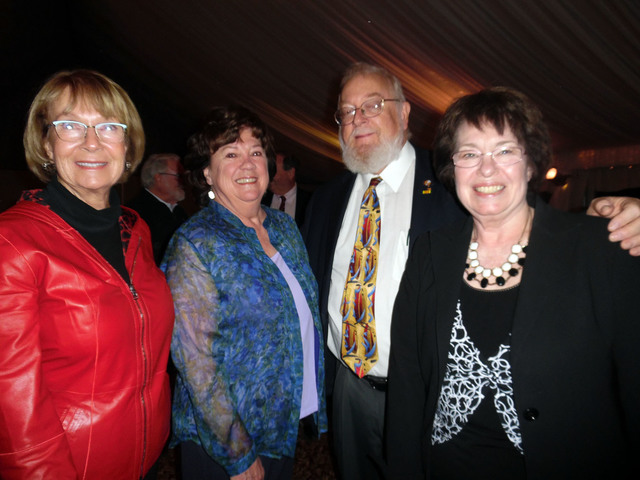 File Clark County Commissioner Mary Beth Scow, far right, seen at the State of the City address Jan. 19 with, from left, Linda Faiss, Regent Andrea Anderson, who sits on the Nevada System of Higher Education; and Councilman Duncan McCoy, unexpectedly announced she would resign by the end of the month to spend more time with her family.

Clark County Commissioner Mary Beth Scow abruptly announced on Tuesday that she will resign her seat this month.

In the midst of her second term as District G commissioner, Scow said at the close of Tuesday’s commission meeting that she will resign after Gov. Brian Sandoval appoints her replacement, but not later than June 30. District G includes all of Boulder City, most of Henderson and parts of the southeastern Las Vegas Valley.

Holding back tears, Scow said she wants to spend more time with her family, which includes nine children, 37 grandchildren and her 89-year-old mother.

“This does not mean I will completely abandon involvement in our community,” Scow, 64, said during the meeting. “I’ll always be an active and passionate participant in the activities and issues of Nevada and will continue — how and when I can — to serve the people of this community I love.”

Scow declined an interview after the meeting.

A Denver native, Scow moved to Las Vegas in 1977. Before joining the County Commission, she served three terms on the Clark County School District’s Board of Trustees and served on many other education-related boards.

Scow was first elected to the commission in 2010. She was re-elected in 2014 and could have run for a final four-year term next year.

Scow’s fellow commissioners were shocked by her resignation.

“None of us knew that this was coming,” Commissioner Chris Giunchigliani said. “It has to do with her mom’s health. We’ve been knowing that she’s had to go back to Colorado several different times to take care of her, and I think at this time she’s made the decision that the back and forth isn’t working.”

“There’s been a great balance here. She’s been a voice of moderation, a voice of reason,” Brown said. “We have a lot of work to do to even begin to identify someone who can begin to fill her shoes.”

Scow’s appointed replacement must live in District G and be from the same political party. Scow is a Democrat.

As of early Tuesday afternoon, Sandoval had not named any potential appointments.

“Commissioner Scow has served her community with honor and I am grateful for her hard work and commitment to building a stronger Southern Nevada. Whether she was fighting for our students on the Clark County School District Board of Trustees, managing complex water issues as a member of the Southern Nevada Water Authority, or safeguarding the health of our community as chair of the Clark County Health District, Mary Beth has always put the needs of her constituents first,” he wrote in a statement. “I wish her all the best in her future endeavors and will announce a replacement in the near future.”

Giunchigliani speculated that state Sen. David Parks, D-Las Vegas, may apply for the seat. He lost the 2010 primary for the seat to Scow by fewer than 100 votes.

No official announcements for the seat have been made, but Sen. Joe Hardy, R-Boulder City, said he may put his name on the 2018 ballot. Hardy said he planned to run for re-election to the state Senate because he didn’t want to run against Scow.

“This changes the landscape significantly,” Hardy said. “I am entertaining the opportunity, but there are some good people out there who are likewise considering it.”

The last commissioner to resign was District B representative Tom Collins in August 2015. Collins also cited family matters. Sandoval appointed former Assembly Speaker Marilyn Kirkpatrick to the seat later that month. She remains on the commission.