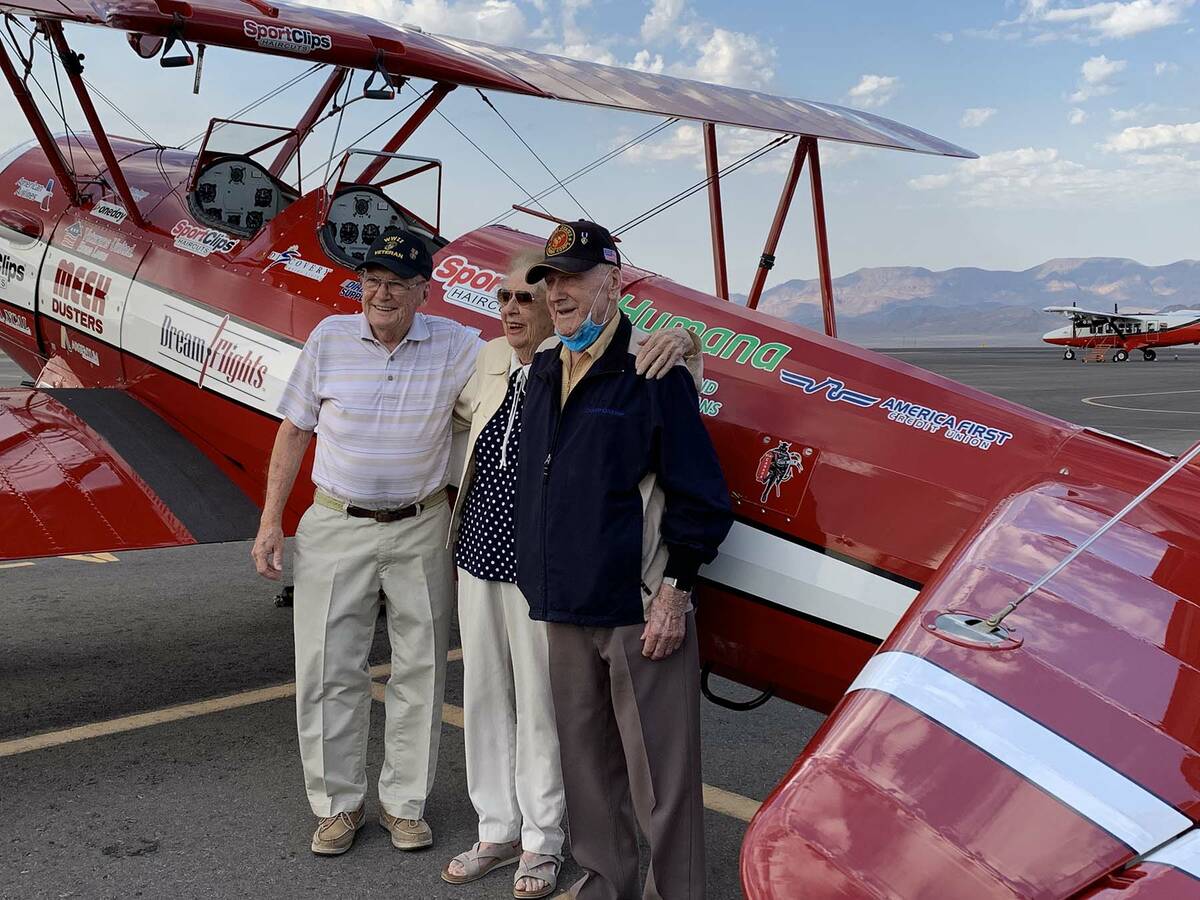 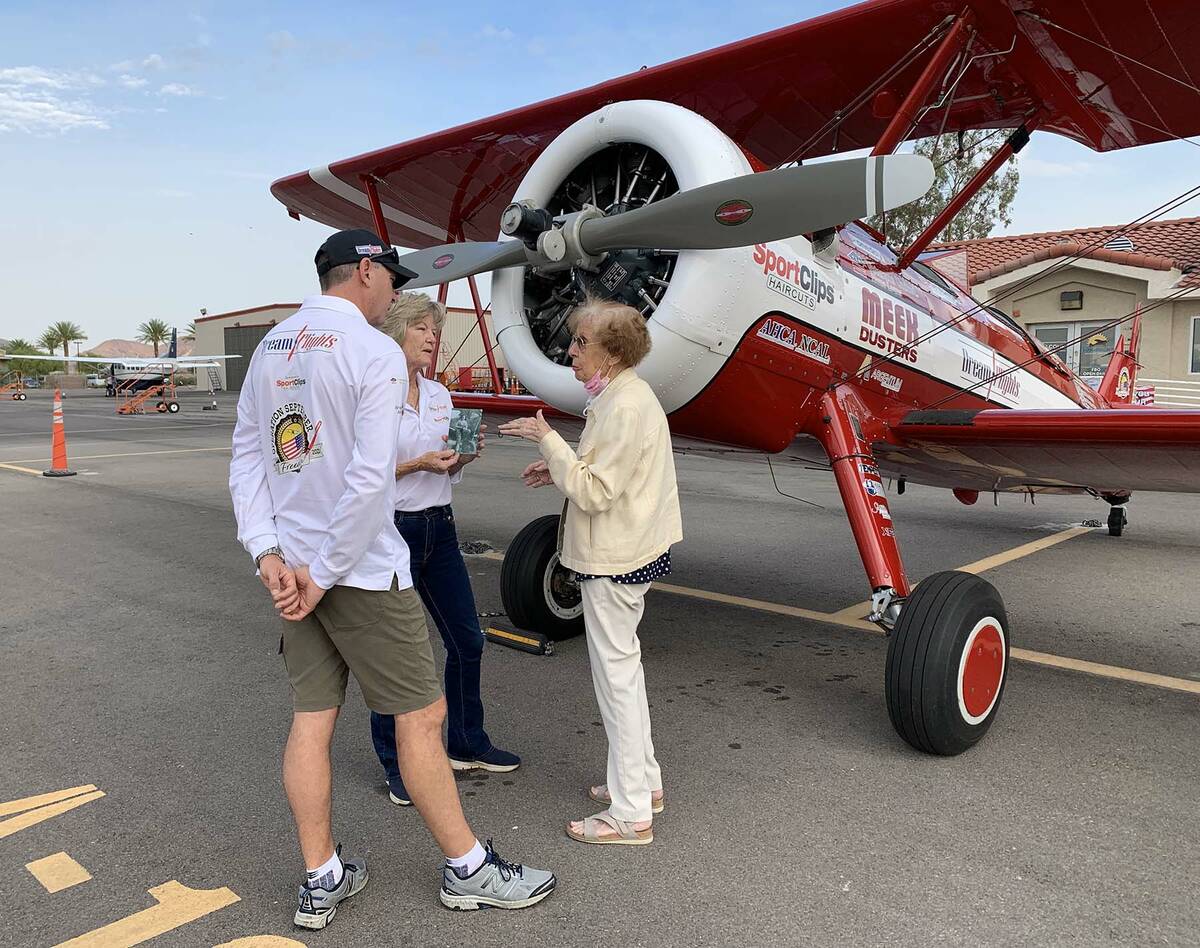 (Hali Bernstein Saylor/Boulder City Review) Ryan Weir and Molly Littlefield, left, pilots for Dream Flights, chat with World War II veteran Gloria Saucier at Boulder City Municipal Airport before her ride in the vintage Stearman on Sept. 23. Saucier was a corporal in the Marine Corps stationed at El Toro Air Base in California during the war. 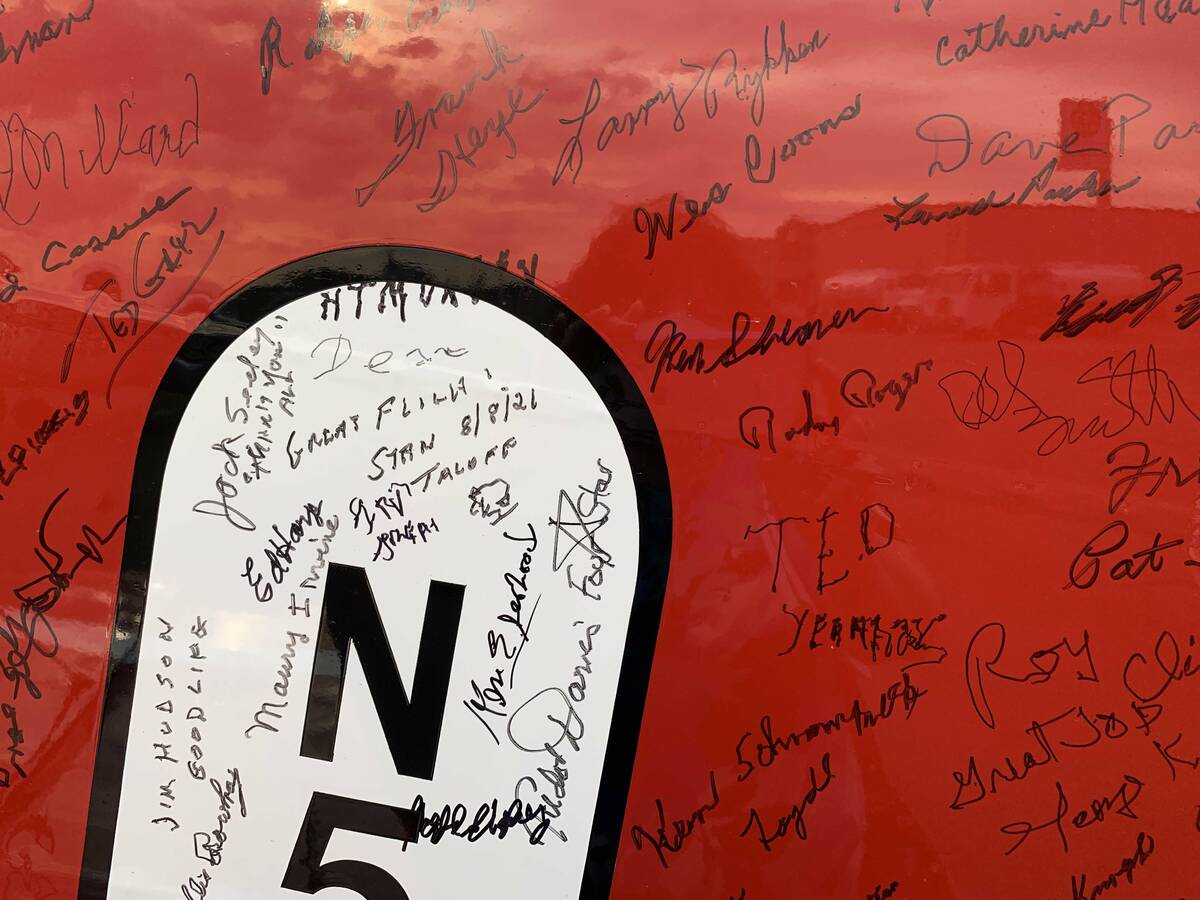 (Hali Bernstein Saylor/Boulder City Review) Signatures of World War II veterans who were taken on a flight in a vintage Stearman by Dream Flights fill the biplane’s tail rudder. 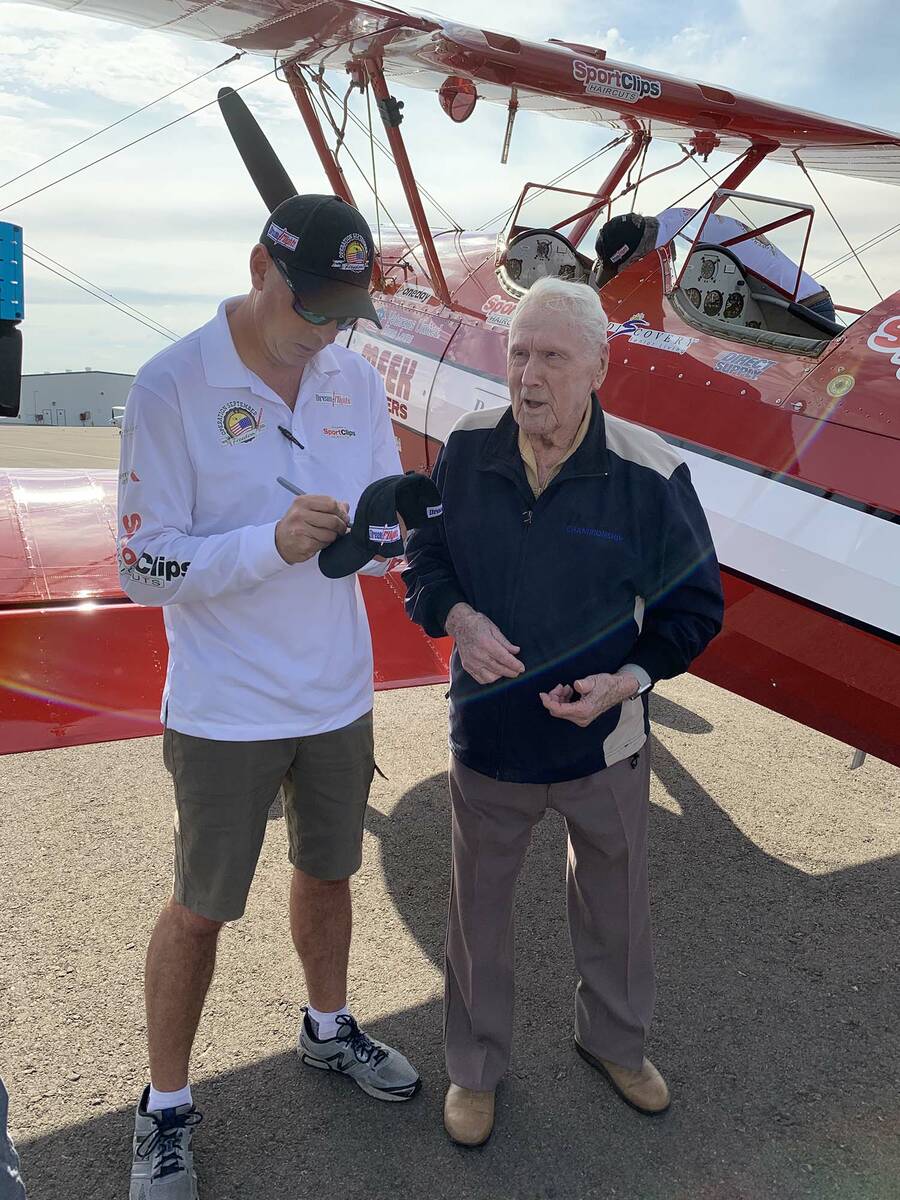 (Hali Bernstein Saylor/Boulder City Review) Ryan Weir, left, a pilot with Dream Flights, signs a special hat for Bob Andre after his ride aboard the vintage Stearman as part of the nonprofit’s Operation September Freedom to recognize World War II veterans. Andre served in the Marine Corps from 1943-44 before he was wounded in action, earning a Purple Heart and Silver Star.

For a few hours last week a bright red Stearman biplane flew across the sky above Boulder City and it was as if time had traveled backward.

Seated inside the cockpit were men and women, some of whom had trained in similar aircraft as they prepared to join the battles of World War II. As the vintage Stearman rose toward the clouds, the years melted away and their memories became clearer.

“When I see the smiles on the men’s and women’s faces it’s like they’re 20 years old again,” said Ryan Weir, a volunteer pilot with Dream Flights, which stopped briefly in town to provide rides aboard the plane.

The veterans were treated to the rides aboard the Stearman as part of Dream Flights’ Operation September Freedom. Launched Aug. 1, the operation aims to provide more than 1,000 World War II veterans in 300 cities across the United States a special ride to honor and recognize their service.

On Sept. 23 and 24 the plane touched down at Boulder City Municipal Airport where about a dozen veterans were given a ride. Honor Flight of Southern Nevada helped Dream Flights arrange the veterans’ rides.

“When I was 16 I flew a biplane. I flew before I could drive,” said Gloria Saucier, who was a corporal in the Marine Corps and worked as an air traffic controller at El Toro Air Base in California during the war. “It’s like a dream.”

“This is the closest to heaven I’ll ever get,” jested Cal McFarland, who served in the Marine Corps from 1943-1945.

Husband and wife teams Ryan and Tammy Weir and Molly and Keith Littlefield shared pilot and crew chief duties during their visit. Both couples, who live in the Seattle, Washington area, have been volunteering with Dream Flights for about a year.

“We’re here because we believe in this mission,” said Molly Littlefield, who has been traveling with Dream Flights for about a month, providing rides for the veterans.

Molly and Keith Littlefield’s fathers were pilots during World War II. Molly’s father, who was born in 1911, was too old for combat but was able to serve as a flight instructor.

“That makes this kind of personal,” said Keith, who is also an Air Force veteran.

Molly Littlefield’s connection to the Stearman runs deep. After the war, the Army sold many of its Stearmans to farmers for agricultural use and her father bought one, which he used while farming in California’s San Joaquin Valley.

Bob Andre, 95, who was a Marine Corps machine gunner in the South Pacific, called the round-trip flight from the airport to Hoover Dam wonderful.

“You’re a helluva pilot,” he told Ryan Weir after the flight.

“It’s just an amazing way to give back,” Ryan Weir said.

Ryan Weir has been flying for most of his life, getting his pilot’s license when he was in high school. Now, in addition to volunteering for Dream Flights, he works as a pilot for commercial flights.

After their ride, the veterans were presented with a special hat and asked to sign the tail rudder and a poster. The rudder and poster will be framed and displayed at the nonprofit foundation’s headquarters in Carson City, Nevada.

Each signature is a story, said Keith Littlefield, noting how the veterans are eager to share their experiences of where they served and what they saw during the war.

“This is what it’s all about: to tell their stories,” he said.

Between the two of them, the Littlefields have taken about 50 veterans for rides. Keith Littlefield said they will have been in or flown over at least 17 states by the time they return home.

Dream Flights has six Stearman biplanes that have been refurbished and outfitted with new engines. A seventh plane is used to train pilots.

Since it was founded in 2011, the organization has given free flights to more than 4,200 veterans and senior citizens living in long-term care facilities.