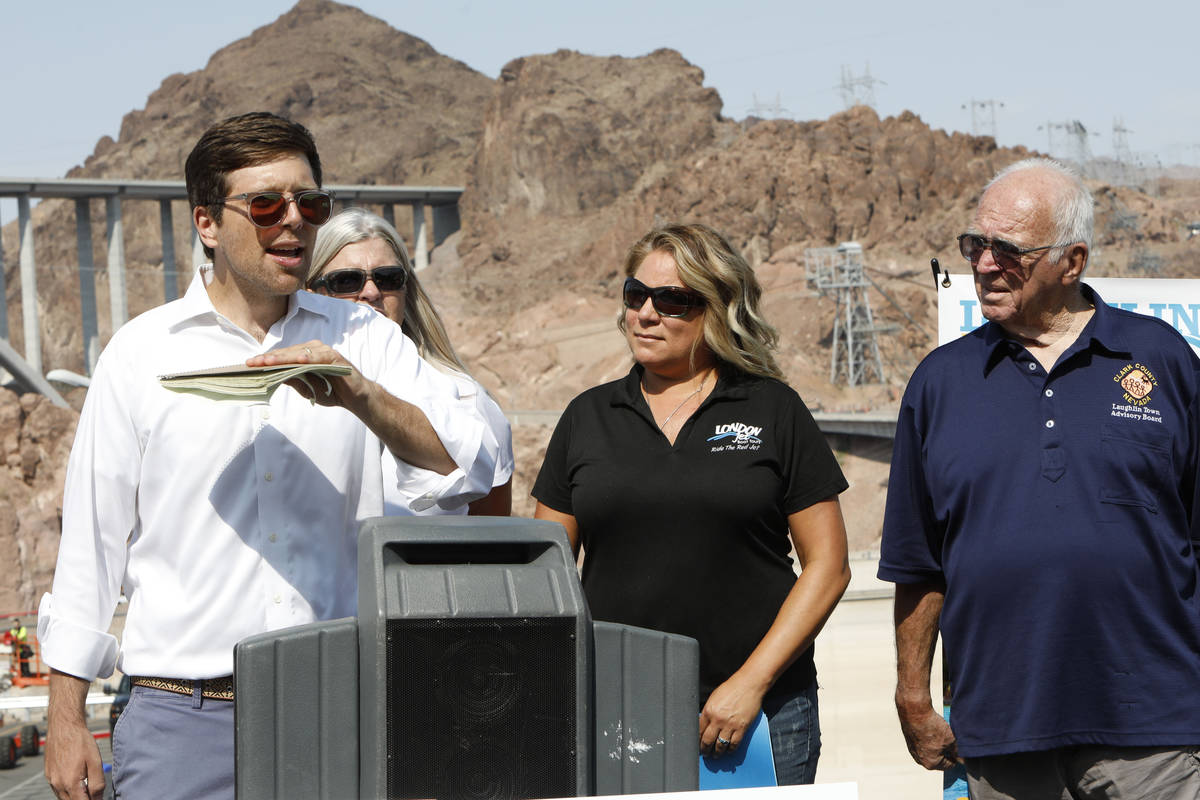 (Chitose Suzuki/Special to the Boulder City Review) Kyle Roerink, executive director of Great Basin Water Network, left, speaks during a news conference on the Arizona side of the Hoover Dam on July 15 to share demands for managing the shrinking Colorado River. Jackie Wallin, president and CEO of Laughlin Chamber of Commerce, from left, Brea Chiodini, owner and operator of Laughlin River Tours and Fred Doten, Laughlin town advisory board member look on.

“We’re here to say, ‘Damn the status quo. No more business as usual,’” Kyle Roerink, executive director of the Great Basin Water Network, said from a makeshift lectern in a parking lot just above the Hoover Dam.

Management of the river, which feeds Lake Mead and serves 40 million people in seven states and Mexico, has failed and the approach must be revised, Roerink said.

The gathering, which included representatives from the Utah Rivers Council, the Progressive Leadership Alliance of Nevada, Laughlin River Tours and the Imperial Irrigation District, among other groups, comes as Lake Mead suffers from historically low water levels and the reservoir nears its first federally declared water shortage.

Roerink said officials have numerous opportunities to deal with how the vital water source is managed between Congress negotiating an infrastructure bill, states receiving COVID-19 stimulus money and the rules that govern the Colorado River coming up for renegotiation before they expire in 2026.

He said the coalition is calling for a moratorium on what it considers wasteful diversion projects along the river, including a proposed pipeline from Lake Powell that would divert billions of gallons of river water to southwest Utah.

“This 140-mile long, $3 billion water project represents the boondoggle of our past,” said Zach Frankel, executive director of the Utah Rivers Council. “It is a completely unnecessary water project.”

The project would carry water to Washington County, Utah, where St. George is located. Proponents of the pipeline say Utah has a right to the additional water use.

But Frankel said Washington County is home to some of the most wasteful water users in the country.

“It is simply madness that as the Colorado River reaches its lowest levels in recorded history, that we would be proposing a new water diversion upstream,” Frankel said. “While the lower basin is going on a diet of cutting its water use, we should not let the upper basin go to an all you-can-eat buffet of water waste.”

A federal water shortage declaration would force a cut in Nevada’s allocation of water from Lake Mead next year.

JB Hamby, vice president of the Imperial Irrigation District’s board of directors, said Lake Mead now serves as a symbol of “drought, uncertainty and unsustainability.”

Reworking how the river is managed can be successful only if officials recognize what climate change means for the Colorado River Basin, he said.

Hamby said urban sprawl across the Southwest, what he called a “sort of suburban Manifest Destiny,” threatens the sustainability of the Colorado River and the communities that rely on it.

“We support efforts to ensure an equitable management of the Colorado River system through the preservation of rights of rural communities, the environment, and for urban water users to be sustainable, not unsustainable, in their use,” he said.