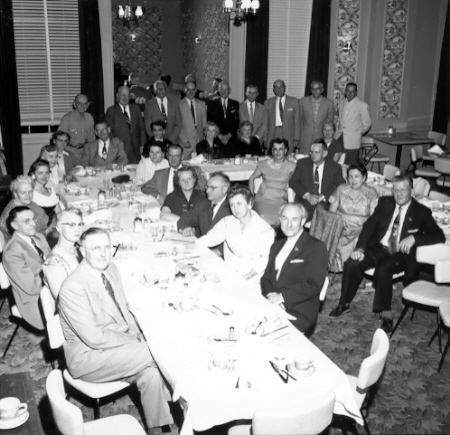 Boulder City’s foundation, an 80-plus-year history that set the landscape for Southern Nevada, starts with the “31ers,” those workers who came from across the country in the early 1930s to work on the monumental engineering project known as Hoover Dam.

Their valiant efforts, some of which resulted in death, helped build the town of Boulder City, and eventually powered the entire Southwest. But as the years passed and more and more 31ers died, the importance of their legacies began to lose their resonance within the very town they cultivated.

The annual 31ers dinner, which first brought them all together in 1956, has transitioned from a celebration to an educational tool where children across the valley see what life was really like in Boulder City during the 1930s.

The 58th 31ers dinner will be held at 6 p.m. Friday at the Boulder City/Hoover Dam Museum, and the 31ers educational outreach showcase will be held from 11 a.m. to 2 p.m. Saturday at the museum. During the showcase, second-grade students from Mitchell Elementary School will perform historical skits, along with children whose families were part of the 31ers.

Patty Sullivan, whose maternal grandparents came to Boulder City in 1931 and lived in the harsh community of Williamsville, wanted to make sure the town’s early history lived on for future generations whom she felt hadn’t appreciated it as much as they should have.

“These stories were not really being captured in an essence for future history,” she said. “It’s not just Boulder City history, it was Nevada history as well as the rest of the country.”

That history is ensconced in a museum-sponsored field trip for students, who enjoy a hands-on experience and learn what life in Boulder City was like when the first dam workers came to town.

Museum director Laura Hutton said the 2.5-hour field trip, which caters mostly to fourth-graders, is a huge success for those who come to visit and vastly popular with private schools over the hill. But Hutton said transportation issues and funding make it difficult getting more public schools to Boulder City.

A dozen private schools took the field trip last year, equating to 615 children who got the chance to dress in clothing of the time, learn about the arduous living conditions, including getting to wash clothes on a washboard before hanging them on clotheslines.

“We explain to the kids that people didn’t come here from this shanty town lifestyle. These people had cars and money, and the 1920s were great,” she said. “But when the stock market crashed and they saw (the) opportunity to come out here and work on this project, this was a huge blessing for them. They really showed up with nothing.”

Hutton credited Sullivan as the driving force behind the educational outreach program. Sullivan, who works in the city’s Parks and Recreation Department, said she is as native as it gets. In her eyes, part of the 31ers’ history is to help give local students and those over the hill an identity to the place they call home.

“We’re trying to make that connection with Boulder City as a stronghold, so they always have that passion for this city,” Sullivan said.

But with rising costs and several hurdles to climb with the school district, public schools don’t get the hands-on experience to fulfill the state’s social studies standard. Instead, teachers simply teach the curriculum in the classroom without traveling to the place where it all happened.

Sullivan said that problem has even trickled down to Boulder City’s schools, too.

“Nowadays, even for Boulder City to get to the dam for a field trip, you have to pay for the bus, and it doesn’t become affordable,” she said.

But the skits, which Sullivan said were created after compiling several oral histories, can be used by any school in the district since most can’t make it to Boulder City. Scripts are available and she said they hope to offer music, sound effects and props in the near future.

Shirl Naegle, a longtime Boulder City resident, said he had heard about Boulder City High School students who had never been to Hoover Dam. He was floored when he heard it.

“When I grew up here, a dam tour was like 50 cents, and parking was free. I could see why now there might be some obstacles,” he said. “But I was surprised. I just assumed that everyone who grew up in Boulder City had been to the dam.”

In a transient town like Las Vegas, Hutton said it can be difficult for kids to gain a closeness with the city they live in. But showing them the reality of how Boulder City started helps the kids relate to their own situation, she said.

“Because we have families constantly moving in and out of the valley, these kids come from other places and they don’t feel a connection to where they’re from,” she said. “Part of what we like to emphasize is that these people that founded Boulder City … none of them were from here. They all came from somewhere else.”

As the torch is passed from celebration to education, the 31ers’ legacy remains fully intact as children across the valley soak in the importance of the early dam workers, and how the Hoover Dam project helped give them a place to live.

And for the instructors who have understood the 31ers’ importance from the jump, keeping the legacy strong is what the educational outreach program is all about.