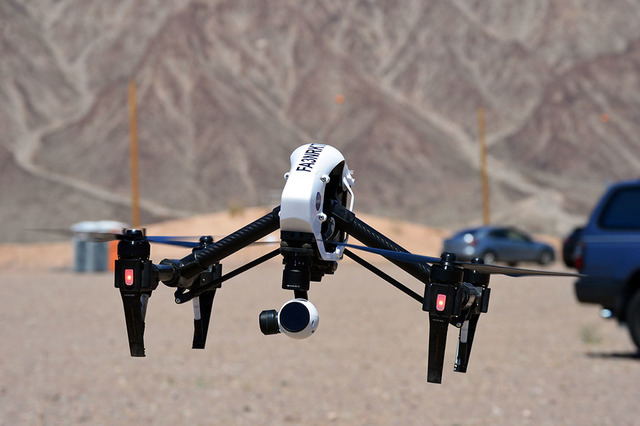 File photo A drone flies and records video at the Aerodrome droneport race track in Eldorado Valley earlier this year. Boulder City Council approved a five-year lease of land to build the first commercial airport at a council meeting Tuesday.

The world’s first commercial droneport is on its way to being built after Boulder City Council unanimously approved a 20-year joint land-lease agreement between the city and company Aerodrome at a council meeting Tuesday night.

The agreement allows Aerodrome to lease 5 acres of land in the Eldorado Valley to build its drone airport.

The company now has a 123-day period to create a master-plan proposal for construction of the port that the City Council must approve. Aerodrome then must build the airport within 12 months creating a tentative completion date of mid-2018.

The agreement between Aerodrome and the city requires Boulder City to supply the land for the droneport while the company must pay for construction of the project and the expertise to ensure the airport follows federal and state guidelines.

City Manager David Fraser said the city’s agreement with Aerodrome will be an economic boon someday.

“The UAV market is incredibly new so there are opportunities to increase revenue to the city by attracting new businesses to the droneport.”

Aerodrome plans to make the droneport a central hub for drone training for private and public entities.

“We want to make this place a learning center,” said Aerodrome CEO Jonathan Daniels. “Everyone from private companies to police and firefighters across the country can come to our airport for training.”

The agreement voted on Tuesday is just for the land to build the droneport. The city is currently working with Aerodrome on a joint-management agreement. The lease states that Boulder City would be the owner of the droneport while Aerodrome would be a contractor in charge of operations.

The management agreement, which has been partially looked at by city officials, would give Boulder City and Aerodrome joint revenues and liabilities when the droneport is operational.

The amount of revenue split between the two entities has not been agreed upon yet, but the city will receive a certain amount of Aerodrome profit’s from the droneport.

“In our contract with Aerodrome they are a fixed-based operator,” Fraser said. “They serve as a private contractor that runs the droneport while we own the property and share the profits with them.”

The management agreement requires that Aerodrome obtain no less than $1 million and no more than $2 million in insurance, which council members thought was not enough liability coverage.

“I question the insurance limit,” Mayor Rod Woodbury said. “If we raised the liability to $2-$5 million, that would not seem so bad. In my experience that was the amount we required from the solar companies.”

Councilman Cam Walker also said the city should raise the insurance requirement but that it was not a pressing matter at the time.

“We are just voting on a land agreement today,” Walker said. “We can ask for more liability later.”

Some residents were worried that a drone could cause a plane or helicopter crash since the droneport location in Eldorado Valley is a little less than 5 miles from the Boulder City Municipal Airport.

Daniels said that safety is important to his company and wanted to assure residents that the droneport would serve as a mini airport and would have all the amenities of a regular airport.

“We have tiny transponders on our drones that can track their locations for other planes and we are working with the Federal Aviation Administration to put our port on aeronautical maps and let companies like Papillon know we are here,” Daniels said. “You will know more about who is flying at our airport than any other airport.”

The city will also receive quarterly updates during construction of the droneport and after completion to make sure the project remains economically viable.

In other actions, City Council members:

n Unanimously approved a plan that would give finical aid to the homeless. The vote approved an interlocal agreement between Boulder City, Las Vegas, Henderson and North Las Vegas to share funding of the homeless management system, an inclement weather shelter, and funding to conduct a census of the homeless population. Boulder will give $6,716 toward its share of the cost.

n Awarded a bid to development company GC&B Enterprises for restoration of the Whalen Field restrooms. The company was the lowest bidder for the project at $121,059.