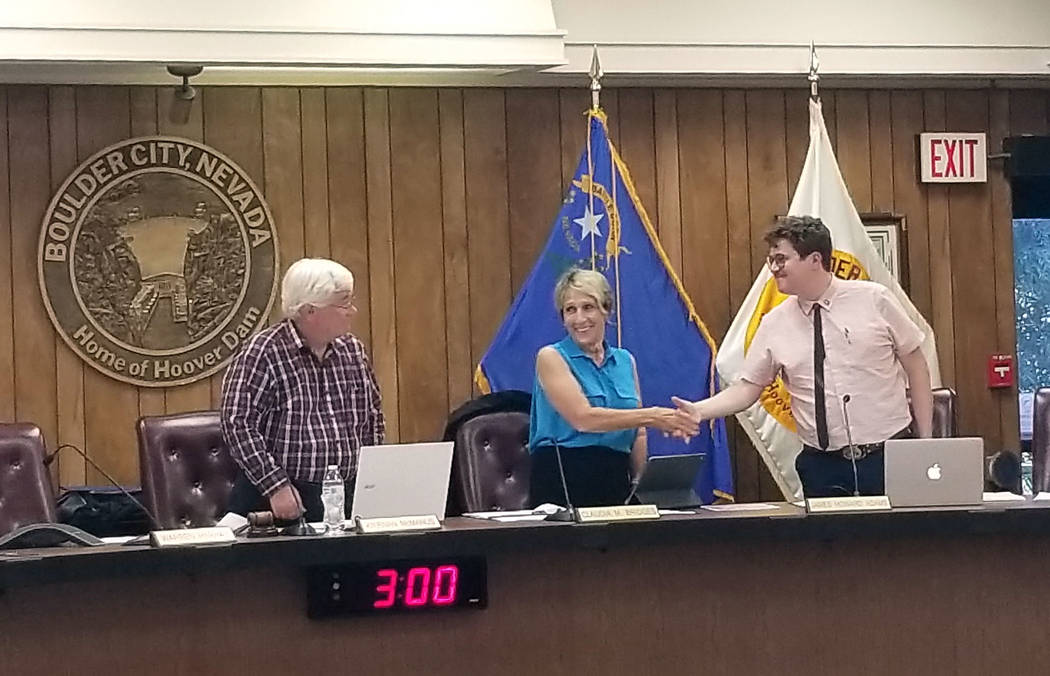 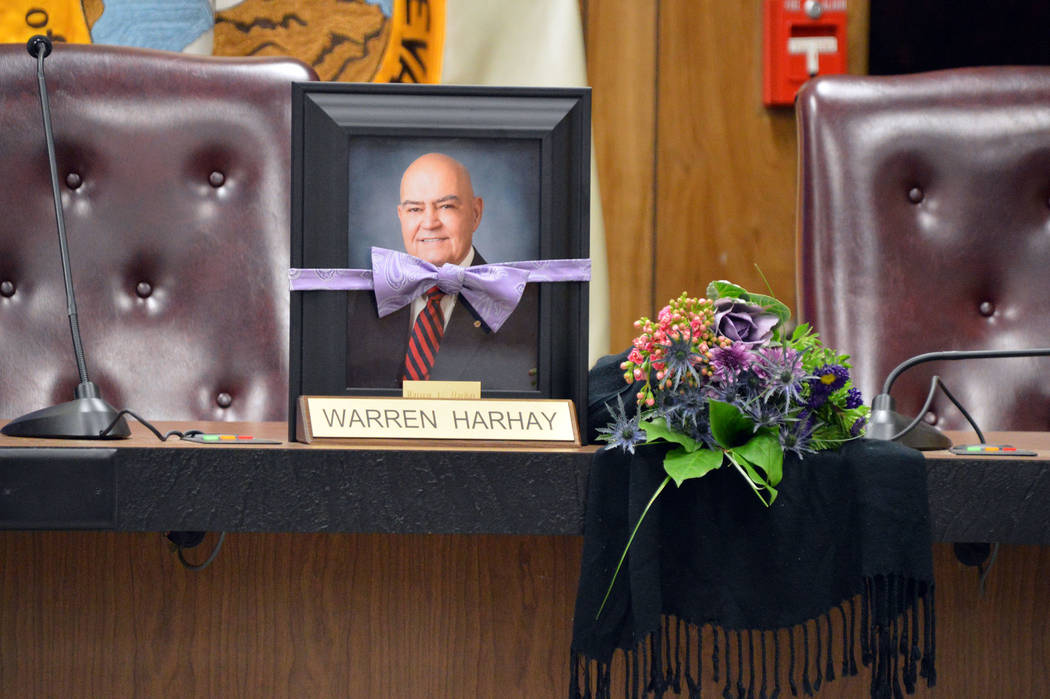 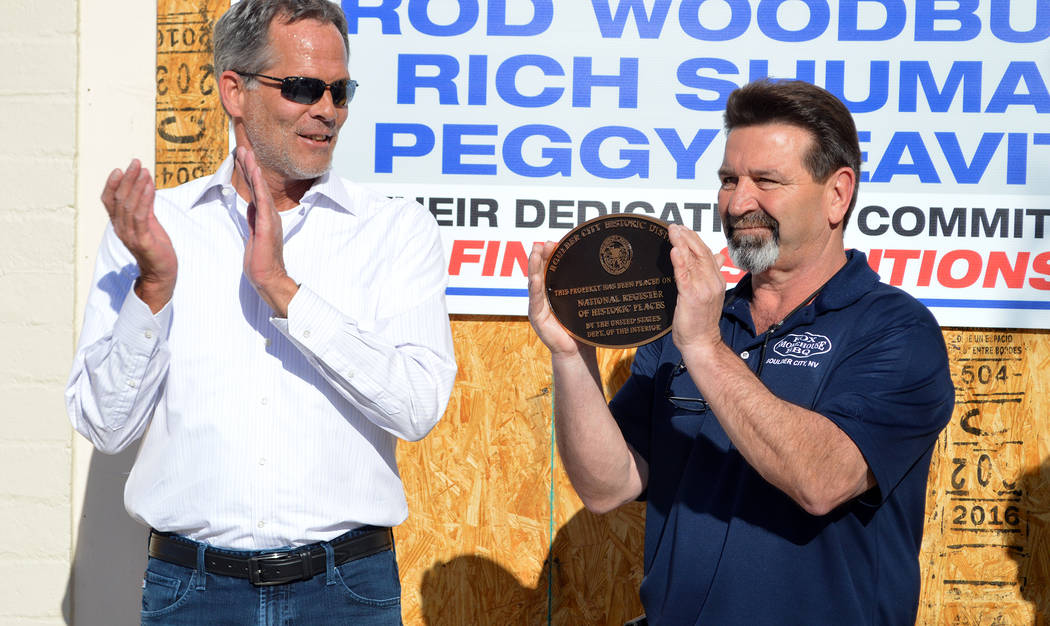 Celia Shortt Goodyear/Boulder City Review Charles Lawson, left, presented Dan Fox with the historic plaque he was given when he purchased the Browder building downtown. Fox bought the building from him in March. 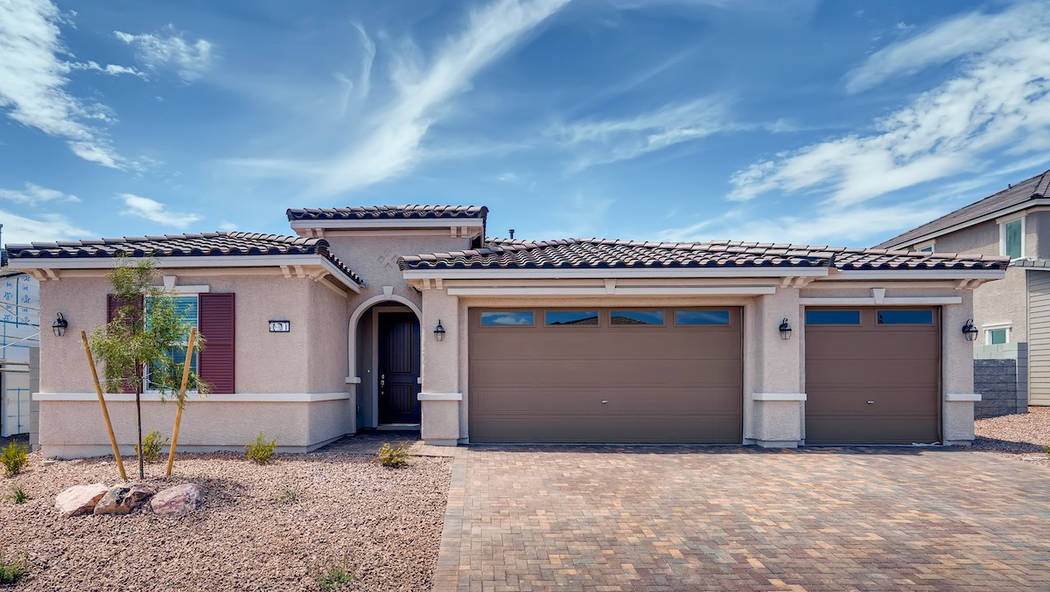 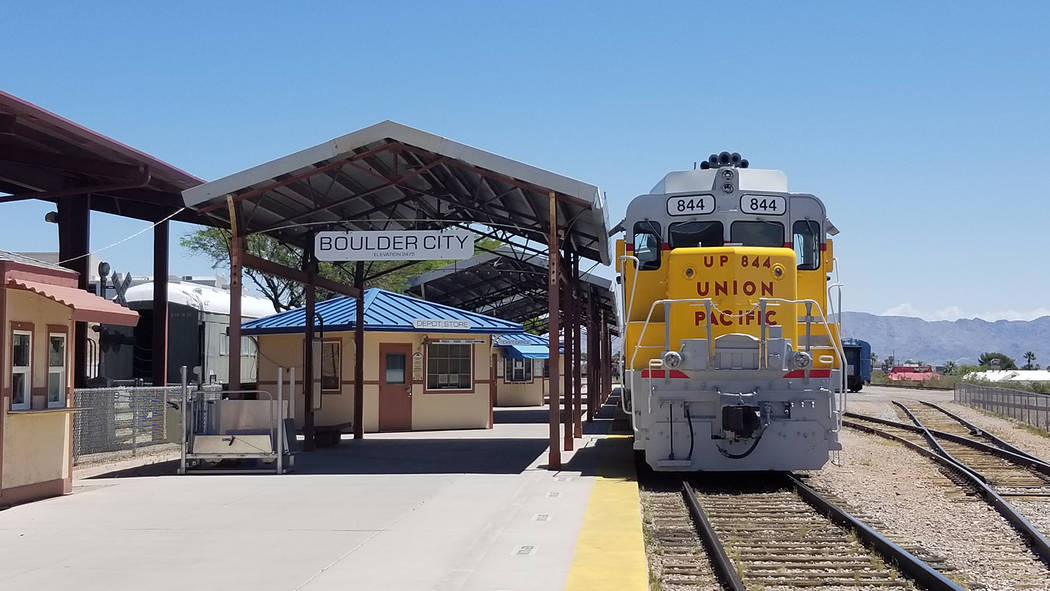 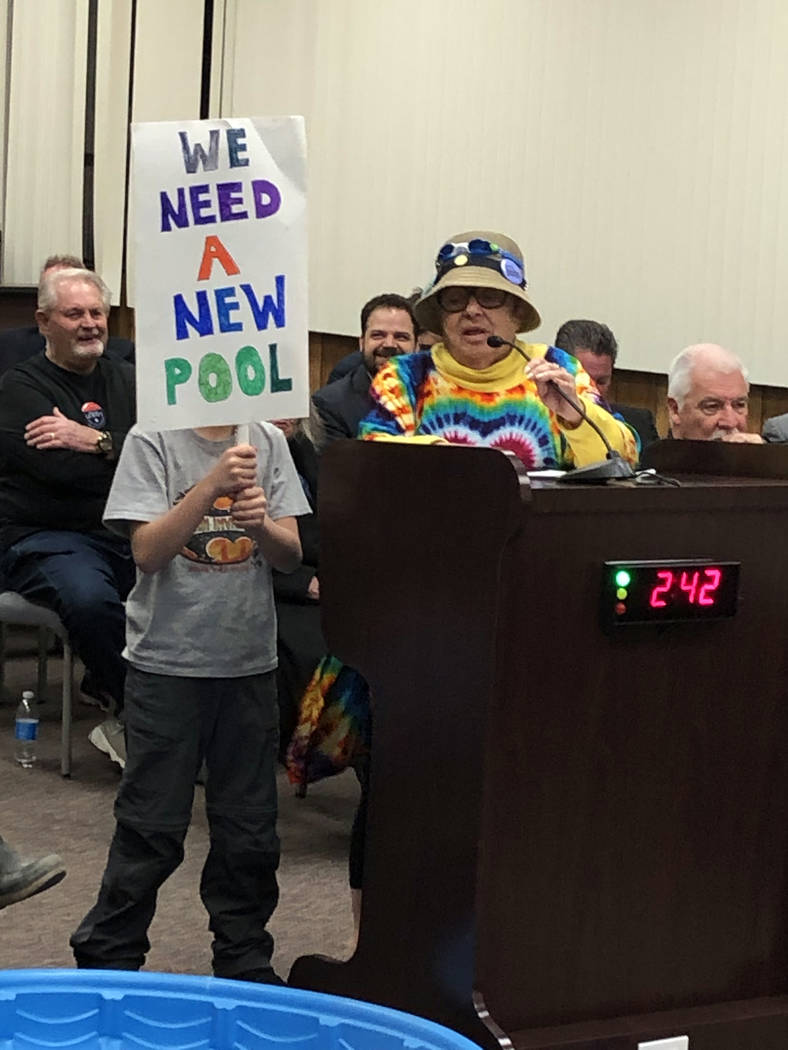 Boulder City Jan Miller and her grandson showed their support for a new pool during the Feb. 26 City Council meeting. Two ballot questions regarding funding for the facility were defeated by voters in June. 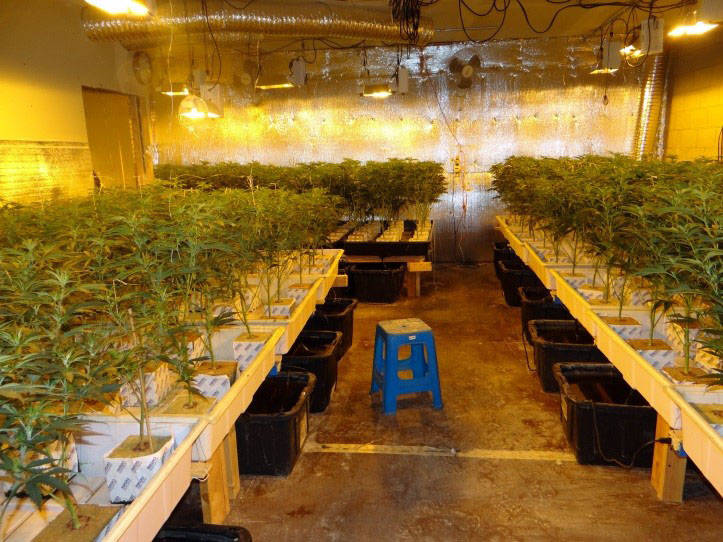 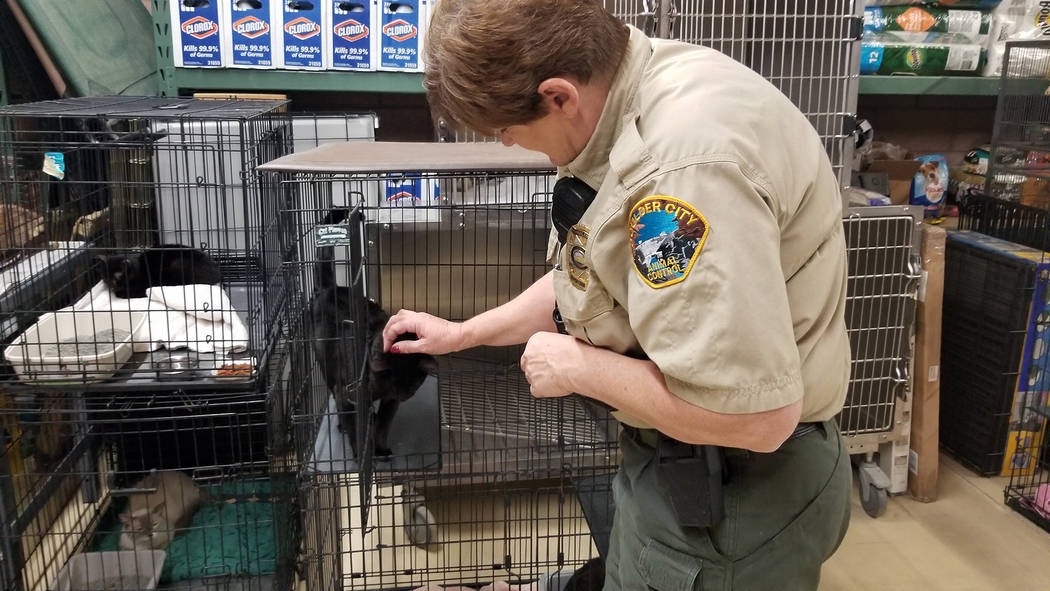 Celia Shortt Goodyear/Boulder City Review Animal Control Supervisor Ann Inabnitt interacts with one of the 43 cats that were rescued Aug. 23 from an animal hoarding situation in a local mobile home. 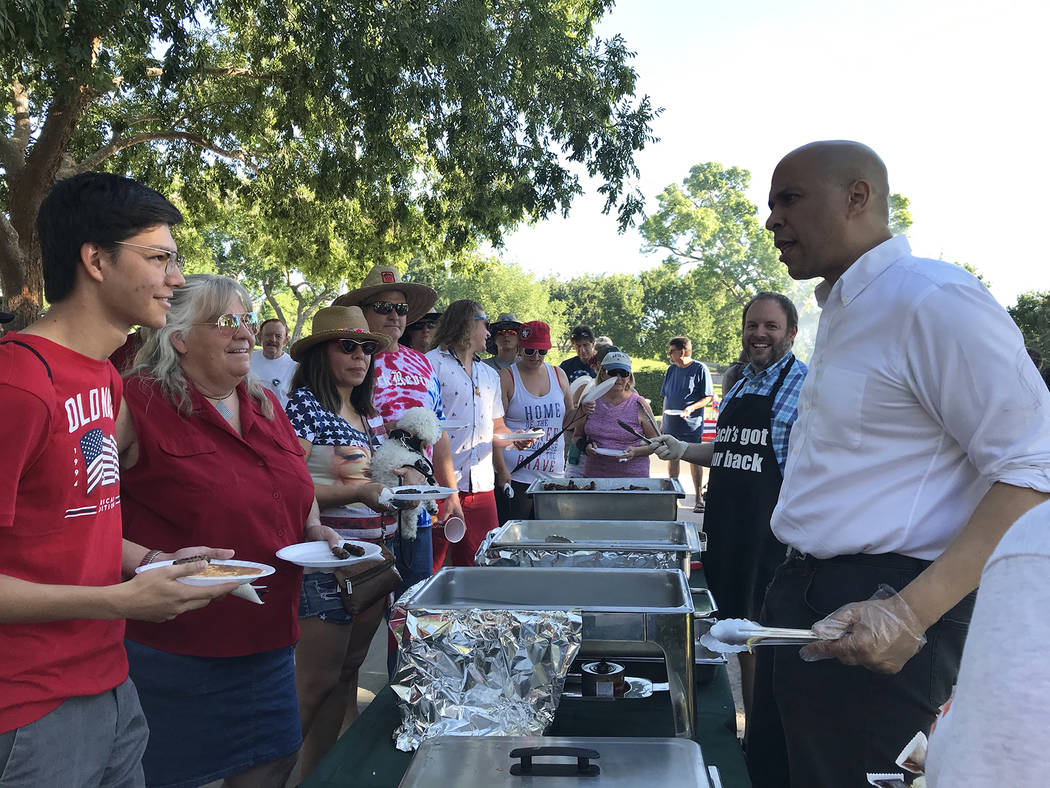 Another year in Boulder City is ending and with it comes a time to reflect on some of the major events from 2019.

One of the biggest was the death of City Councilman Warren Harhay. Additionally, the election brought in other changes to city leadership including a new mayor and new council members.

The city’s oldest commercial building, the Browder building, was sold and not torn down after sitting vacant for years.

The second phase of the town’s first new subdivision in nearly 30 years, Boulder Hills Estates, started construction near the intersection of Bristlecone Drive and Adams Boulevard.

With the new year starting Wednesday, here are some of the biggest stories of 2019.

Boulder City voters ushered in a new era of leadership in June by electing Kiernan McManus as mayor over incumbent Rod Woodbury.

“This was an important election for Boulder City where the voters delivered a clear message for making changes in the direction of the government of Boulder City,” McManus said at the time. “In the past two elections the incumbents have been rejected by voters. I believe that is because the residents of Boulder City firmly believe in what they want for the future of our community. It is the same desire we have had for 60 years. That is a vibrant, successful community with people willing to stand up and ensure we retain the values and qualities we enjoy.”

To fill the seat left vacant by McManus’ election as mayor, council appointed resident Tracy Folda. Folda was chosen by lot after she and fellow resident Judy Dechaine each received two votes from the council members.

Several months later more changes came to the council when Harhay died Oct. 22 after a lengthy illness. He was 76 years old and had been participating in meetings by teleconference for about six months before his death.

“Today is an extremely sad day for Boulder City, as we have learned of the passing of Councilman Warren Harhay, a dedicated, steadfast member of City Council. He was an honorable man who listened to his constituents and voted in the best interest of the community as a whole,” the city said in a statement. “Councilman Harhay showed an incredible commitment to his role. Mayor Kiernan McManus, City Council, City Manager Al Noyola and city employees express their sincerest condolences, thoughts and prayers to the Harhay family. His presence and his leadership will be greatly missed.”

Resident Judy Hoskins was appointed Nov. 18 to fulfill Harhay’s term, which expires in 2021.

Another change to city leadership was the sudden resignation of its longtime fire chief, Kevin Nicholson.

Nicholson retired the morning of Sept. 3, effective immediately. He did not give a reason for his retirement after leading the department for 12 years.

“I’ve been blessed to work with dedicated, brave men and women at the Boulder City Fire Department,” he said in a city news release. “The people in this community have been good to me and my family, and I’m proud to call Boulder City home.”

The city contracted with Management Partners, a municipal consulting service agency, to provide its interim chief, Steve Walton. Walton is also a planning commissioner for the city and is excused from those meetings while he is chief.

The Browder building, 550 Nevada Way, was purchased by Dan and Kelly Fox in March. They own Fox Smokehouse BBQ.

“We are going to keep it as historic and Boulder City as possible,” said Dan Fox after buying the historic property.

Kelly Fox said they are planning to divide it into two units and lease them. The building is made of up three units, and the middle one will be incorporated into the corner one that was formerly Mel’s Diner.

“These are two prime locations for downtown businesses,” she said. “We are excited to get it going.”

The Foxes bought the building from Charles Lawson of Eldorado Gold LLC, who bought the Browder building in 2015 with the intention of opening a taco shop on the site.

StoryBook Homes opened the second phase of its Boulder Hills Estates neighborhood near the intersection of Bristlecone Drive and Adams Boulevard in October. This portion has 45 home sites.

“We are thrilled with the response we’ve had to Boulder Hills Estates from Boulder City residents and beyond,” said Wayne Laska, principal of the homebuilding company. “To see this project embraced by buyers in such a short time is extremely gratifying.”

The second phase will include a 34,000-square-foot open space/community park.

StoryBook is purchasing the approximately 30-acre parcel in three phases. When complete, it will have 127 homes.

The passage of Assembly Bill 84 in June provides $217.5 million in general obligation bonds protect, preserve and obtain the benefits of the state’s natural and cultural resources.

It allocates $30 million for state museums, including the expansion of the Nevada State Railroad Museum in Boulder City and money to renovate and improve the depot in Ely.

“We will get $20 million roughly to expand our railroad museum, but it may be two years before we see it,” said Randy Hees, museum director.

The facility will be expanded to include a 9,700-square-foot visitors center, new boarding platforms, display buildings and a linear park with interactive features for children and links to the River Mountains Loop Trail. It will be completed in three phases and is estimated to cost $35 million.

Hees said he hopes they can get approximately $2 million before the bonds are sold so that the architectural work can continue and they can hit the ground running when the state money comes through.

Both stopped by the pancake breakfast presented by the Rotary Club of Boulder City, taking turns at the grill flipping pancakes before marching in the 71st annual Damboree parade through downtown.

On Aug. 2, Julián Castro, former secretary of Housing and Urban Development, spoke before about 50 people at a private residence.

Animal Control Supervisor Ann Inabnitt said she and other animal control officers started recovering the cats Aug. 23 and had to wear hazmat suits and respirators because of the conditions inside the residence. The conditions at the trailer were a health hazard and the property was a loss.

Among the impounded cats, some were semiferal, meaning they need to learn how to interact with people and how to eat and drink from bowls and use the litter box.

One of the older cats had to be euthanized.

“It had a tumor in its mouth,” Inabnitt said. “It was so large it was not able to eat well, and the vet thought it would be best to put it down.”

The community also stepped up to support the shelter with the influx of animals and donated more than 1,000 pounds of cat food, 1,000 pounds of cat litter and approximately 20 cat crates. Inabnitt said people also donated money to Heaven Can Wait, a nonprofit clinic for spaying and neutering, to help provide the surgery for more animals.

The Boulder City Police Department assisted with several investigations throughout the year that resulted in 15 arrests and the seizure of approximately 2,400 pounds of drugs.

On Oct. 31, the department released a statement saying a four-month investigation into drug trafficking in the area had led to three arrests and the seizure of almost 2,000 grams of methamphetamine in June.

A third suspect, Gordon Knighton, was arrested, but according to court records, he is not in custody and has not pleaded guilty to any charges.

Both are serving those sentences at Nevada correctional facilities.

Cmdr. Brent Speyer said this information was not released until October because it was tied to an ongoing investigation.

On Oct. 29, local police along with the Metropolitan Police Department’s criminal intelligence section served search warrants at two homes in Boulder City and one in Henderson. They arrested 10 people, five of whom are suspected members of the Brotherhood motorcycle club, including the president and treasurer of the Las Vegas chapter.

According to the city, a citizen alerted police about a strange odor coming from an industrial condo in the 1600 block of Ann Way. Officers determined that the smell was from marijuana. They arrested Yongjun Tan and Cheng Zl when the two were leaving the building.

In April, two decisions with the city’s utility systems set the stage for some changes throughout the coming year.

At the April 9 City Council meeting, a utility advisory committee was established after more than a year of waiting. It has seven members and its purpose is to assist the utility department and provide information and recommendations to council. It meets at least once a month.

Two weeks later, the council approved delaying the automatic utility rate hikes for six months, which was estimated to cost the city $1.59 million. Rates were originally supposed to increase automatically by 2.5 percent July 1. Council approved the delay even though staff did not recommend it. At its Oct. 22 meeting, they unanimously approved having staff draft resolutions to repeal the automatic 2.5 percent utility rate increases that would start in January and continue through June 30.

The city pool continued to dominate community discussions during 2019 as voters denied two ballot questions that would have allowed a project for a new pool to move forward.

Boulder City ballot Question 1 asked whether the city could use money from its capital improvement fund toward the design and construction of a new aquatics facility in order to reduce the bond obligation. The funds would be used as they become available and would not exceed $5 million. It received 1,898 yes votes and 2,759 no votes.

Ballot Question 3 asked whether the city could authorize issuing up to $40 million of general obligation bonds for the purpose of acquiring, constructing, improving and equipping recreational projects as defined by state law including an aquatic center. It failed with 1,300 yes votes and 3,355 no votes.

If it had passed, it would have required a property tax levy for 30 years.

At its Sept. 10 meeting, council established a temporary advisory committee to review alternatives about repairing or replacing the municipal pool. It has seven members, including the city’s mayor and mayor-pro tem. The committee is expected to disband by Dec. 31, 2020.