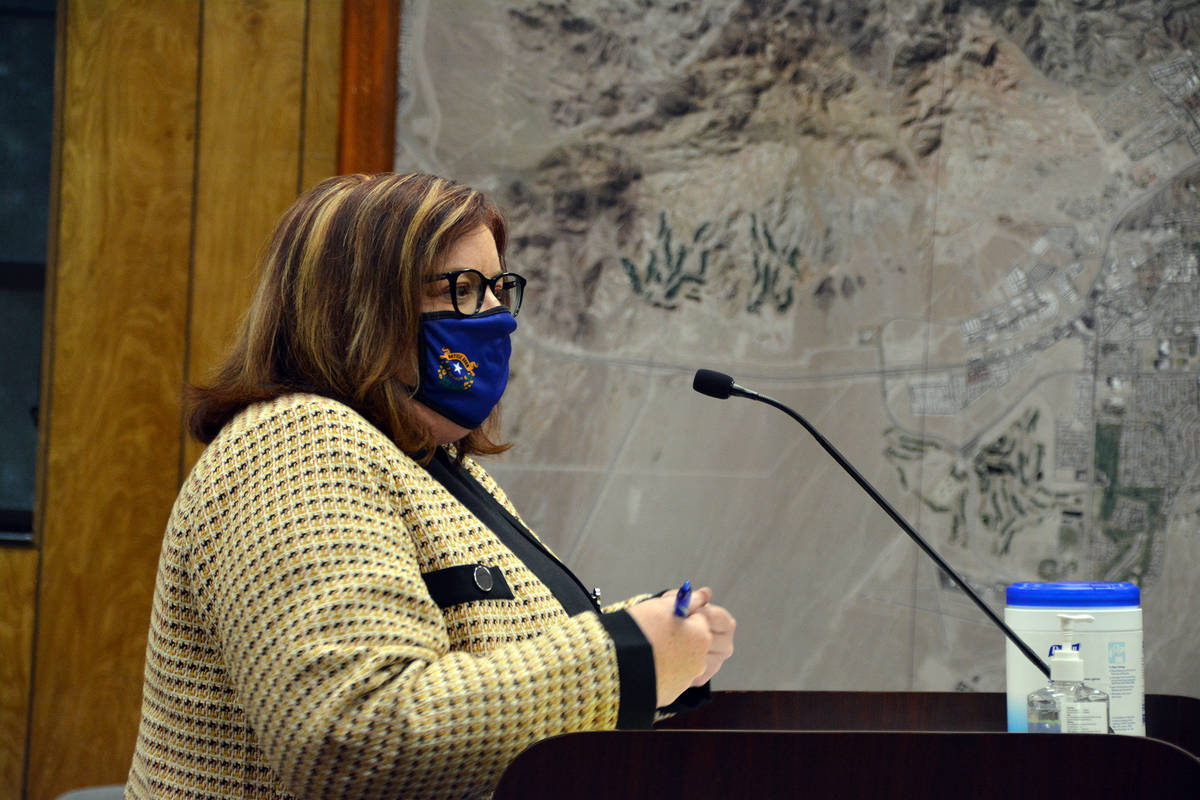 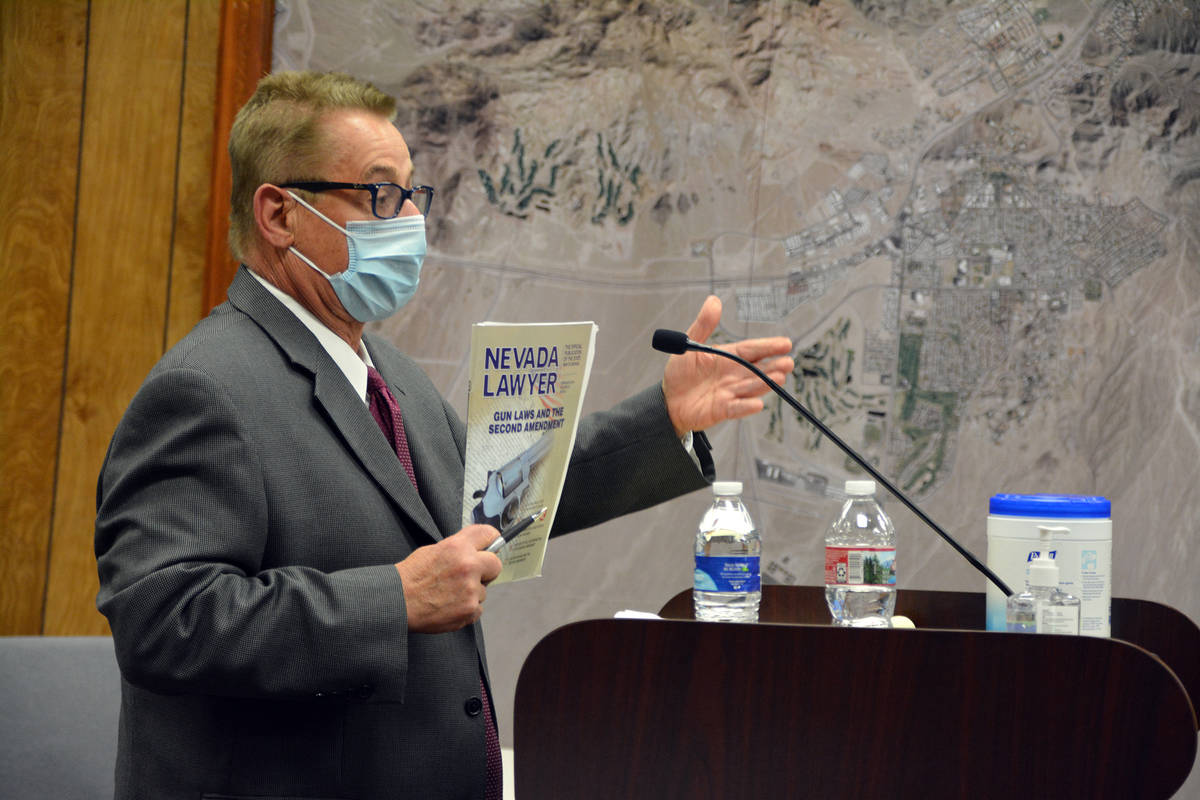 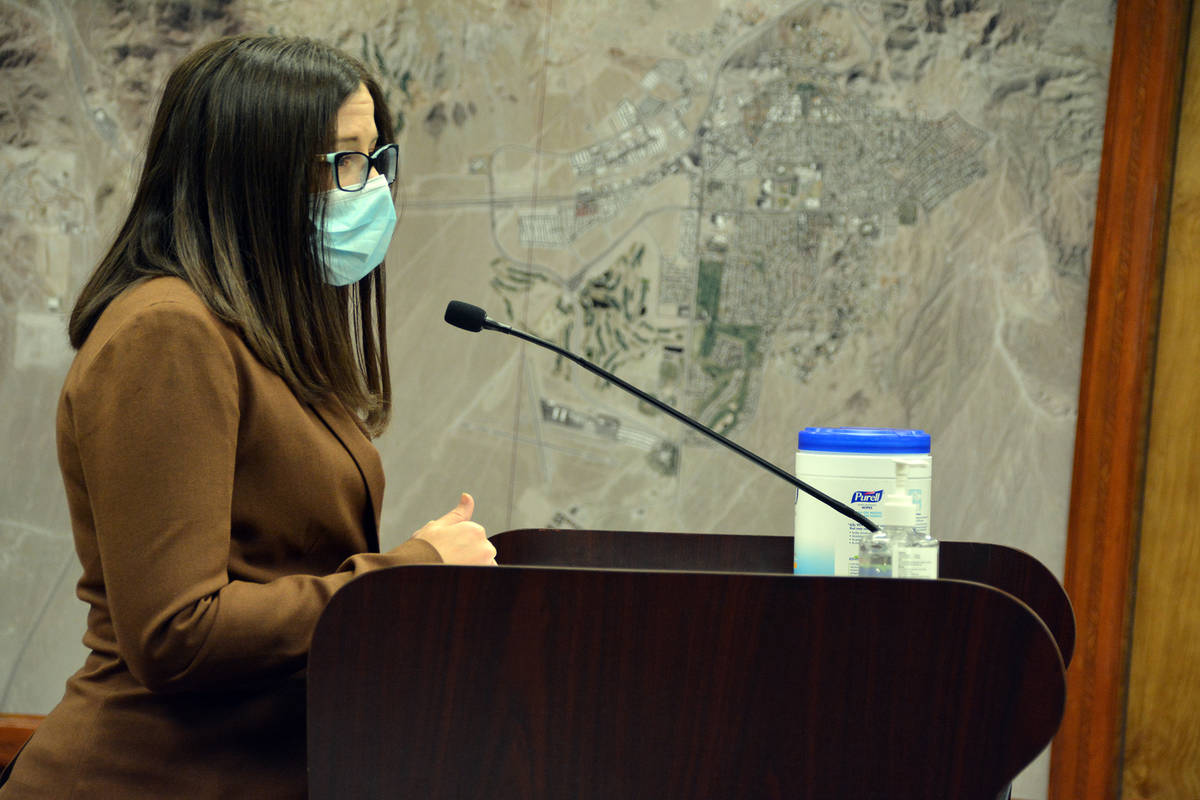 Originally there were five candidates, but Megan Smith and Jason Patchett asked to be removed from consideration. Megan Smith said she had accepted another position and Patchett did not respond to a request for a comment.

During a three-hour special meeting Monday, April 5, City Council members talked individually with Kindel, Stephen Smith and Walker about their qualifications, their thoughts on the role of a city attorney and what they would tackle in the first 90 days on the job.

“I think I bring a lot to the table,” said Kindel, a deputy district attorney for Nye County. “I think Boulder City deserves the absolute best candidate for this position, and I’m here to tell you today that I really believe I’m the candidate. … I would be honored to work here.”

Kindel has been an attorney in Nevada for 23 years. Her experience includes working for an independent law firm, being the assistant city attorney for Sparks, Nevada, and the city attorney for Mesquite, Nevada. She was also a finalist in Boulder City’s 2017 search for a new city attorney.

She said she thought Boulder City is an “amazing city” with very involved citizens and that she and her husband hope to retire here.

“I see the city attorney as a legal adviser to the city and to you as a board,” said Kindel. “I’ve actually had to tell residents on the phone in other jurisdictions that, ‘No. I don’t represent you even though you live in the city.’”

Stephen Smith and Walker also said they viewed the city attorney as a legal adviser to the city.

“I’m the attorney for the office. … I’m for the institution,” said Stephen Smith.

“At all times … my client is the city, and I act as your legal adviser as you carry out your official positions in directing policy initiatives for the city,” Walker said.

Stephen Smith has been an attorney in Nevada since 1993 and said he has had a love affair with Boulder City since he moved to the state from Arizona.

“Boulder City’s a great city. … This is a coveted position,” he said.

If chosen, both he and Kindel said in their first 90 days they would focus on getting to know their client, its legal needs and the available resources.

“The first thing I would do is … meet the mayor and council, and then I would meet with the different city officials. … I’d meet with the police department because the city attorney is the prosecutor,” said Stephen Smith.

Walker has been working for the city since she was appointed acting city attorney in October 2020. She has been practicing law in Nevada for three years.

She said two projects that would be “important to take on right away” would be updating city ordinances and creating templates for different city contracts.

“One of my major projects would be going through and updating … ordinances so that they’re up to date with current Nevada law and current Supreme Court case law so that they’re more comprehensive and enforceable, which is important,” said Walker. “In addition, a lot of our laws (ordinances), I think, could be clarified. … Another thing I’d like to do is look at some of our contracts and develop really robust templates.”

Each of the finalists also had an opportunity to ask the council questions during their interviews.

Kindel said she watched the March 23 meeting where they expressed support of Walker becoming the full-time city attorney and asked them to clarify how open-minded they have been in the hiring process.

“Mayor, I heard you and I believe two other council members say that if the vote was going to be held that day, you would vote for your acting city attorney,” she said. “I’ve been approached by some people in the public, and I wanted to give you guys the opportunity to … belay any concerns either candidates or residents may have about your open-mindedness as we go through this process.”

Mayor Kiernan McManus said he remembered saying which finalists he supported, but he said he did not make that statement about Walker.

According to the recording of the March 23 special meeting, he said she “would be someone I would consider for the position.”

Additionally, all the council members said then that Walker was at the top of the list of finalists.

“I think she would’ve ranked well regardless of having this opportunity (as acting city attorney). … She’s certainly at the top of my list,” said Councilman James Howard Adams.

Councilwoman Claudia Bridges said that if she had to make a decision that day she would want Walker to continue in the job because she was impressed with the work she had done, but she also said she wanted to interview Kindel.

Despite these past comments, all the council members said they were interviewing Kindel, Stephen Smith and Walker with an open mind.

“I’m very open-minded to hear from everyone,” said Councilwoman Tracy Folda. “Everyone has the same opportunity and the same questions presented to them for the council to hear.”

Stephen Smith did not question the council’s open-mindedness, but he did say it seemed “pretty enthused” about Walker during the March 23 meeting.

He asked what the timeline of hiring would be, and McManus said it would probably be another two to four weeks.

Council will discuss its next step in the hiring process after interviewing the top candidates for the city manager’s position during Wednesday’s, April 14, special meeting. It could approve extending a job offer contingent on a background check.