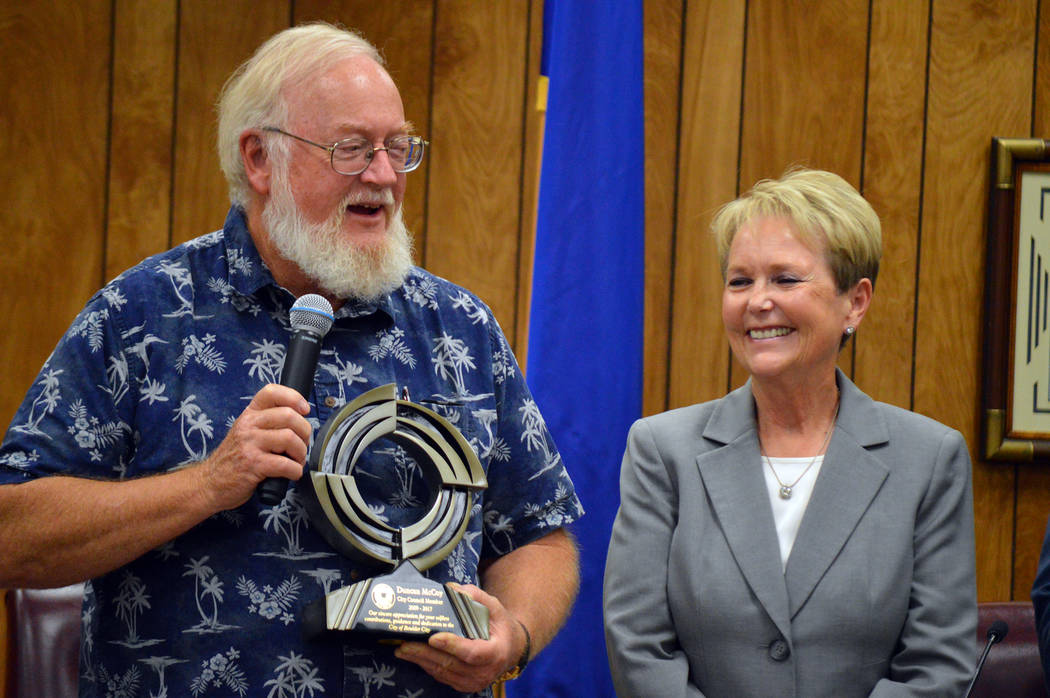 Celia Shortt Goodyear/Boulder City Review Councilman Duncan McCoy reflects on his eight years on the council during his last official meeting of the governing body. He was honored for his service Tuesday evening by fellow council members, including Councilwoman Peggy Leavitt.

Boulder City United Methodist Church has a new home, as the City Council approved its use of a city building for its services.

Beginning in July, the church can meet at the Elaine K. Smith Center on Wyoming Street for its Sunday morning service, as well as use two rooms as office space during the week. It has been meeting in the chapel at St. Jude’s Ranch for Children.

“Boulder City United Methodist Church is actively involved and has been since its inception in the Boulder City community,” said Barbara Paulsen, chairperson for the church council, at Tuesday’s council meeting. “We regularly participate in community events … and we’ve enabled long-standing events … to continue by assuming leadership … to continue to provide them to the community.”

City Council members supported the license agreement for the religious organization, which gives the church exclusive use of rooms 106 and 106A during the week, as well as room 100 on Sundays from 8 a.m. to 1 p.m.

The license agreement between the church and city is on a monthly basis with monthly rent of $850, including basic utilities. Either party is required to give a 30 day termination notice.

“I just want to comment … what a great organization the United Methodist Church is in Boulder City and how they stepped up to the plate for so many different events to help out, and we certainly consider this a partnership, and I think it’s a great use of that building,” said Councilwoman Peggy Leavitt.

The council members unanimously approved the agreement, which goes into effect July 1.

Also at Tuesday’s meeting, the council members honored outgoing Councilman Duncan McCoy for his eight years of service. McCoy was attending his last meeting as a councilman; he chose not to seek re-election for the coming June 13 general election.

Woodbury described McCoy as the consummate public servant and added that you always know what you’re getting with him.

Councilman Rich Shuman thanked McCoy for his encouragement to join the Planning Commission and referred to him as the guiding force in his career as a public servant.

Councilman Cam Walker told McCoy he’d miss his one-liners as well as the way he could make the other council members laugh with a simple comment.

“He is an honorable man … it’s just been a privilege for me to get to know him,” added Leavitt.

Former Mayor Roger Tobler also attended Tuesday’s meeting to recognize McCoy and said it was honor to serve with him.

McCoy said that his eight years on the council had been interesting ride and that wasn’t always been fun because of the serious issues they had to deal with from time to time.

He said he most appreciated the people who he had disagreements with or had different takes on issues with them because he enjoyed those conversations.

“The thing that makes Boulder City a great place is that everybody is interested … Everybody wants the best place we can have, people are passionate about it,” he said. “It’s going to be interesting being on the other side of the room when I come. I may come and give Cam some one-liners.”